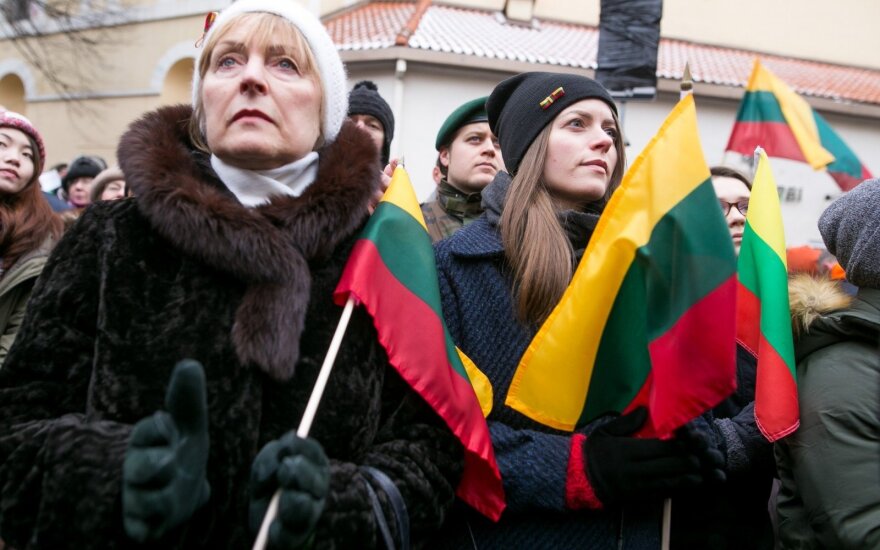 On the Pilies Str, in Vilnius
© DELFI / Tomas Vinickas

"At the beginning of the past century, we looked forward with great hope to any sign of support. Today we know that we have true friends and allies, and their strong supportive shoulder," Lithuanian President Dalia Grybauskaitė said during the ceremony of raising the three Baltic flags in front of the Presidential Palace in Vilnius.

Top EU officials and the presidents of Germany, Poland, Ukraine, Latvia, Estonia, Finland, Iceland and Georgia, and Sweden's Crown Princess Victoria were present for the ceremony in the snowy capital.

Grybauskaite thanked them for coming to Vilnius to congratulate Lithuanians on the centennial.

Lithuania enters its second century as a modern state being a member of key Western structures, the European Union and NATO, which allows it to feel safer in the face of potential threats from Russia.

To demonstrate collective defense commitments, US and Danish fighter-jets deployed to Lithuania flew over Vilnius during the ceremony, which was attended by around 6,000 people, according to police estimates.

European Council President Donald Tusk, in Lithuania for the centennial celebrations, said that "only by being united can European nations be sovereign and free of dependency on the great superpowers".

"Lithuania understands this all too well, and that is why it has always played an active, and constructive, role," he told reporters in Vilnius.

In his congratulatory message, US President Donald Trump thanked Lithuania for its "dedication to NATO, contributing both funds and personnel to protect the territorial integrity of all Allies and to combat the threat of global terrorism".

Asta Drilevičiūte, one of thousands of people attending centennial celebrations in central Vilnius, said that she had been in a festive mood since the start of the week.

"We had both Užgavenės (Lithuania's Mardi Gras) and Valentines' Day earlier this week, and now we are celebrating the Independence day. This is a special day. It's fun to be here," the woman told BNS.

Her friend Lina also said that February 16 was a special day for her.

"I never celebrate my birthday, but how I feel today is something I'd describe as impressive," she said.

The official centennial celebrations began earlier on Friday when thousands of people marched from the capital's central Cathedral Square to the Rasu Cemetery to honor the signatories of the 1918 Act of Independence and culminated with the tolling of church bells across the country later in the day.

Landmarks and buildings across Lithuania and in some foreign cities glow yellow, green and red for the centenary of restored statehood.

Tallinn's Freedom Square and Tel Aviv's Town Hall were lit up in the Lithuanian national colors on the eve of Feb. 16, and the Polish Presidential Palace in Warsaw, the Empire State Building in New York, Los Angeles International Airport and the Ponte Estaiada bridge in Sao Paulo will be illuminated in yellow, green and red on Friday evening.

The Council of Lithuania on Feb. 16, 1918 proclaimed the restoration of an independent state of Lithuania, founded on democratic principles, with Vilnius as its capital.

Liudas Mažylis, professor at Vytautas Magnus University, last year found one of the original copies of the resolution, written by hand in Lithuanian and German and with 20 signatures on it, in Berlin's diplomatic archive. Germany has loaned the document to Lithuania for five years.

Lithuania fought against the Bolsheviks, the West Russian Volunteer Army, or Bermontians, and Poland in 1918 to 1920 to defend its independence.

Landmarks and buildings across Lithuania and in some foreign cities are illuminated on Friday in...

Denmark's Crown Princess Mary has called off her visit to Lithuania due to the passing of the queen's...

Polish President Andrzej Duda will begin his three-day visit to Lithuania this week by meeting with...