(1)
BNS
aA
The genocide of the Jewish people is a scar on Lithuania and the whole humanity's face, Lithuanian Foreign Minister Linas Linkevicius said during an event held at the Ministry of Foreign Affairs on Tuesday to mark the International Holocaust Remembrance Day. 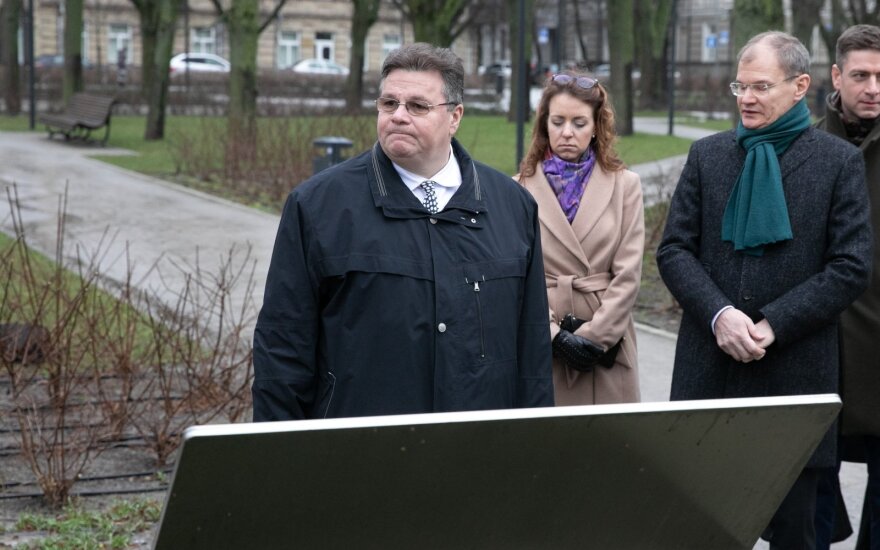 The minister added that "we must do everything to prevent it from happening again".

"The Holocaust did not fall from the sky, indifference helped it emerge. The same can happen to any other group of people which becomes weaker than the dominant group of people. We cannot be silent and we must make every effort to fight for human rights and against public anti-Semitism," Kukliansky said.

During the event, the foreign minister gave a rose, a symbol of life and victory, to every Holocaust survivor and other people who attended the event.

A photo exhibition by photographer Saulius Paukstys about the Jewish community in Lithuania was presented during the event, as well as a second cycle of documentaries on the Righteous Among the Nations by Dominykas Kubilius. The cycle features unique testimonials and memories of Holocaust survivors, as well as historians' comments on the Jewish genocide and Lithuanian people who resisted it.

The commemoration was attended by representatives of the Jewish Community of Lithuania, former Vilnius and Kaunas Ghetto prisoners, foreign diplomats residing in Lithuania, and members of various cultural organizations.

The International Holocaust Remembrance Day is marked on January 27. On this day in 1945, prisoners of the Auschwitz-Birkenau concentration camp were freed. Over 1.5 million people, including more than 1 million Jews, were killed at the largest concentration and death camps operated by the Nazis.

During World War II, the Nazis, assisted by Lithuanian collaborators, killed over 90 percent of the Jewish population of over 200,000 in Lithuania. Over 900 people have been named the Righteous Among the Nations for saving Jews.