Left at the altar? Belarus and the West

Artyom Shraibman, Carnegie Moscow Center
aA
A mismatch between the expectations of Belarus and the West about the form that their future relationship will take are about to come to a head, likely leaving Belarus disappointed and rapproachment with the West in a perilous state. 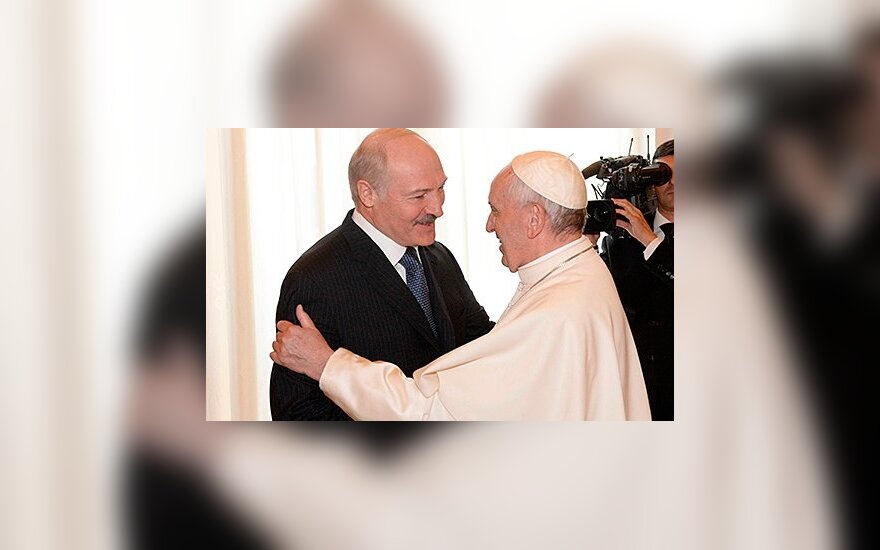 Belarusian President Alexander Lukashenko has used a recent audience with the Pope as a way to enhance Belarus’s ties with the West. But the West no longer expects Minsk to be a close ally or to embrace European standards. Instead, it’s expected to be a source of stability. This mismatch in expectations will soon come to a head and the rapprochement will grind to a halt.

During a 40-minute conversation with the pontiff in the Vatican, Alexander Lukashenko spoke of the parties’ common ideology and invited Pope Francis to visit Minsk. In turn, the Pope called Minsk “a place of peace,” referring to the Belarusian leader’s mantle of peacemaker in the conflict between Russia and Ukraine.

Lukashenko also met the Italian president, but his meeting with the Pope
was definitely the apex of his visit. To be seen shaking hands with the epitome of moral authority was supposed to demonstrate to other European leaders that there is nothing embarrassing about being seen around the Belarusian president.

A number of recent domestic and foreign policy maneuvers paved the way for Lukashenko’s social outing. We have heard more about Lukashenko’s international efforts: his unclear stand on Crimea, maintaining working relations with Kiev, and hosting peace negotiations. European and
American diplomats have been visiting the Belarusian capital almost every month. The country’s foreign minister routinely meets representatives of Western political foundations that Russia accuses of financing “color
revolutions” (Belarus subscribed to the same view until recently).

There have also been changes inside the country, prompting the lifting of EU and U.S. sanctions last fall. Lukashenko released all political prisoners last August, and his security forces no longer disperse opposition rallies. The Belarusian police stopped arresting people for participating in unauthorized political activities almost a year ago.
Courts do not sentence them to a day in prison anymore, opting for fines, which certainly looks more appealing to the Western eye than shoving protestors into police cars.

Minsk has resumed its dialogue with the EU on the death penalty and human rights issues. Lukashenko has agreed to include a small part of the OSCE’s electoral process recommendations in the parliamentary elections scheduled to take place this fall.

Yet none of this, of course, changes the essence of the Belarusian authoritarian system. Personalized power regime leaders do not generally open the door to political transformation as long as they are still capable of running the country.

There are two reasons why Belarus has opened the door now. First, Russia’s neighbors are increasingly questioning the reliability of their alliance with Russia in light of its Crimea, Donbas, and Syria campaigns. Secondly, the Belarusian economy has been more affected than the Russian one by the decline of Russian markets and low oil prices (refined oil is the main export commodity of Belarus).

In fact, the state of the economy is what differentiates today’s situation from a previous thaw in Belarus-West relations in 2008. At that time, Lukashenko was concerned by the Russian invasion of Georgia. He released political prisoners, visited the EU several times, and had a falling-out with Russia, which triggered a scathing investigative documentary about him on Russian television. But then came the December 2010 election with a crackdown on anti-government protestors. Lukashenko again felt the brunt of the EU sanctions and went back to his old routine.

Now Minsk is more serious. It realizes that the current crisis is here to stay, and that having the increasingly politically and economically unreliable Moscow as its only ally has its risks. But the problem is that the West’s position has also changed over the years.

Eight years ago, the European Union launched the Eastern Partnership initiative. Brussels offered six post-Soviet countries (Armenia, Azerbaijan, Ukraine, Moldova, Georgia, and Belarus) closer relations without any guarantee of their joining the EU. These countries were expected to transition toward democracy and become the EU’s reliable partners in exchange for visa-free travel and free trade.

Practically none of these objectives has been achieved. The Eastern Partnership region with its Donbas, Abkhazia, Karabakh, corruption-induced paralysis in Chisinau and, to a large extent, Kiev, has become the EU’s chronic headache.

The good old days and their naïve hopes are now long gone.
Having learned its lesson in Ukraine, Europe is trying to play it safe with Belarus. Back in 2010, Lukashenko was promised 3 billion euros if he held fair elections. Now the Europeans are offering greater technical assistance in the sphere of alternative energy, educational exchanges, and border checkpoints. These projects are worth a few hundred million euros at best.

The EU lacks both the political will and the actual resources to provide Minsk with more serious financial help, and the offers that are now on the table will not quench Belarus’s thirst for fast cash.

Closer political cooperation is also facing serious challenges. First, Belarus is part of the Eurasian Economic Union (EAEU), which means that it cannot technically conclude the Association Agreement with the EU. One can hardly see any chance for such an agreement anyway, given Russia’s sensitivity on the matter.

Unlike Georgia and Ukraine, which are in the middle of discussing visa-free travel with the EU, Minsk and Brussels are only talking about lowering visa fees.

While realpolitik is indeed gaining ground in Europe, moral values still count. Whichever way you look at it, Belarus is an authoritarian country with a president for life and no separation of powers.

In a recent address to the people and the parliament, Lukashenko has already voiced his displeasure with the “empty talk” that characterizes the current stage of Belarus’s relations with the West.

Therefore, meeting the Pope may prove to be an effective PR stunt to help Lukashenko both at home and abroad. Meetings with other European leaders could follow, but Belarus will not drift toward the West, all the rhetoric of the Russian media notwithstanding.

'No clear answers' at Lithuania-Belarus consultations over Astravyets nuclear plant

Lithuanian representatives who are holding meetings with Belarusian officials on Astravyets Nuclear...

The European Union has to speak with once voice about the safety of a new nuclear power plant that...

Lithuania has called on the European Bank for Reconstruction and Development (EBRD) to be...

An environmental impact assessment report that Belarus has presented to Lithuania regarding its...