Leadership of NATO battalion under establishment in Lithuania arrives in Vilnius

BNS EN
aA
Leadership of the international NATO battalion to be established in Lithuania arrived in Vilnius from Germany on Tuesday. 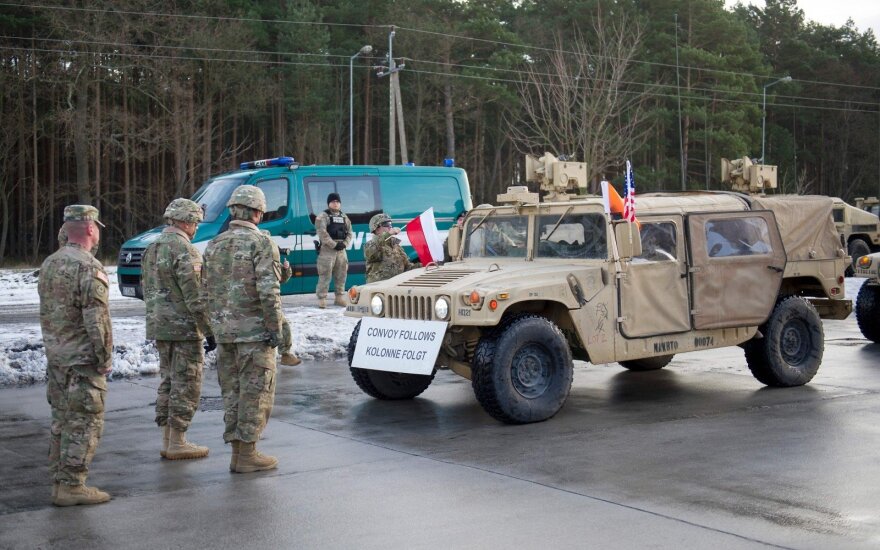 The German warplane with the first group of soldiers landed at the Vilnius airport on Tuesday evening, carrying about a dozen of officers including commanders of the battalion.

"My soldiers and myself are really happy to be in Lithuania and to start enhanced forward presence together with Lithuanian friends and partners," commander of the battalion, Lieutenant Colonel Christoph Huber, told journalists at the airport.

Along with other troops, Huber will make a brief stopover at the German Embassy in Vilnius before proceeding to Rukla, the stationing site of the NATO battalion.

Huber did not elaborate on the number of German troops that arrived in Lithuania.

"Today we have advanced part dealing with the stuff necessary to receive the main forces coming in the next few weeks," said the officer.

The Germans arrived in Lithuania a few hours after arrival of the first group of Belgian troops who will also contribute to the battalion.

"The Belgian soldiers arrived at the Palanga airport, and their equipment arrived by ferry," Captain Andrius Dilda, spokesman for the Lithuanian Armed Forces, told BNS.

In his words, the group consists of about 30 soldiers of the logistics company, with another few dozen troops expected to arrive on Thursday.

The German-led battalion will include a total of about 1,200 troops. In addition to Germans and Belgians, it will in the long run include troops from Norway, the Netherlands, Luxembourg, Croatia and France. The battalion will be stationed in Rukla.

NATO last year decided station a multi-national battalion in each of the three Baltic countries and Poland in response to Russia's intervention in Ukraine and military activity in the region.

Deividas Šlekys, political scientist at the Vilnius University's International Relations and Political Science Institute, told BNS that the well-equipped battalion would consolidate Lithuania's combat power and contribute to the efforts of deterring Moscow.

"A serious combat power is coming, and it would make fast intervention more difficult. We should not forget that the arriving troops are from the large Western states. It is a signal to Moscow that the Western states take the political risks, knowing that their troops could die and give more thought to their ways of response. Russia should calculate whether it wants to see what Washington or London would do under these circumstances," he said.

Troops from the Belgian Armed Forces are to arrive in Lithuania by ferry via the port of Klaipėda...

Top commanders of the NATO international Allied battalion to be deployed in Lithuania are coming to...

As the town of Rukla , central Lithuania, awaits deployment of more than 1,000 NATO troops, the...

Dialogue with Russia – what may have to be sacrificed?

The first troops of the international Allied battalion should arrive in Lithuania next week, army...

Finland, Sweden to consider training along with NATO force

Finland and Sweden will consider the possibility of their troops training along with NATO forces...