BNS EN
aA
The Latvian government supports the Lithuanian position to demand the highest security standards at the Astravyets nuclear power plant under construction in Belarus, however, does not consider any laws to restrict electricity imports from the utility, says Latvia's Foreign Minister Edgars Rinkēvičs. 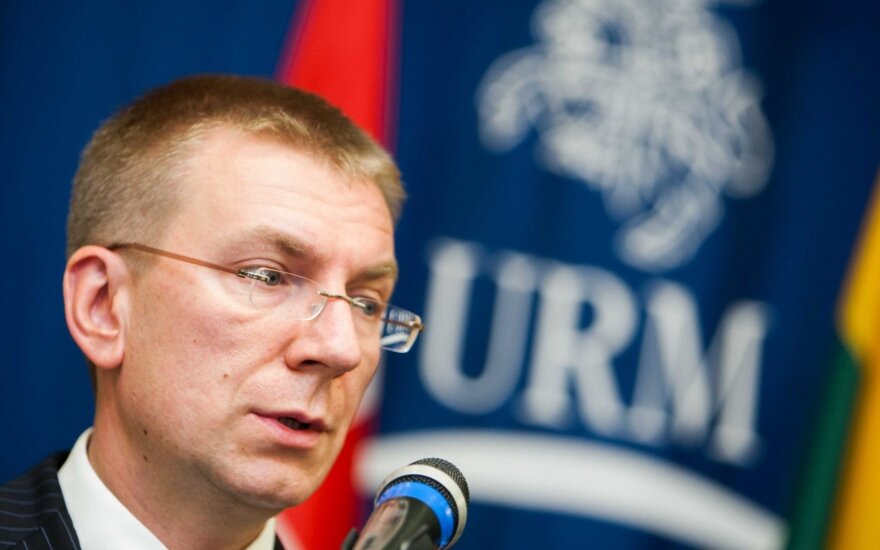 In an interview to BNS Lithuania, Rinkēvičs said he was constantly raising security matters in meetings with officials of Belarus and the International Atomic Energy Agency (IAEA), however, added he considered the Astravyets nuclear plant an issue of Lithuania's domestic policy he was not willing to interfere with.

In the minister's words, decisions on synchronization of Baltic electricity grids with Western Europe should first be made by experts, not politicians, as experience shows that early interference of politicians may hinder implementation of regional projects.

Rinkēvičs answered BNS questions after the Snow Meeting of security policy experts in the Trakai district.

BNS: Lithuania is now considering a draft law with attempt to block the Belarusian nuclear power plant. It seems that there are differences between Lithuanian and Latvian position on the matter?

Rinkēvičs: I wouldn't necessarily describe this as a difference. We have been supporting the Lithuanian position and concerns over environmental issues, safety standards, and I've been talking about those issues with my Belarusian counterpart foreign minister. I've been also raising this with director general of International Atomic Energy Agency.

However, our position is that we have to engage as much as possible with Belarusians. We are not as far going as considering any kind of legislation, but we do think that issues related to safety standards, to environmental standards should be held up to the highest standards.

As I said, we have had numerous discussions about this with our Belarusian counterparts and we have got reassurances from them that they consider this as a very important issue. We will continue to keep this on our agenda but I will not go as far as now currently saying that we would consider that or another legislation.

BNS: What is your government's position regarding plans to synchronize power grids with European system?

Rinkēvičs: This is an issue that our prime ministers discussed during Lithuanian prime minister's first visit in Riga. I think that we are in the major agreement that we have to work on synchronization with European electricity markets and we have left it to the experts and to the ministers of energy - in our case minister of economy - to work out a viable plan. I'm very happy to see how already Swedish-Lithuanian interconnection is working, our integration to the Nordic electricity market is a success story. We are also talking with our Polish friends, with the European Commission.

BNS: At this stage, do you have a position whether the synchronization should go through Poland, or through Nordic countries?

Rinkēvičs: This is where we believe we have to find the bet way in the experts' discussion. Unfortunately, in the past we were discussing, for instance 5-6 years ago, issues like nuclear power plant here. There were some differences and then came the referendum in Lithuania. We were discussing when it comes to the gas market about the regional LNG. And sometimes we have got different opinions. The least what I want, is politicians to interfere before experts come with the best conclusion.

Unfortunately, past experiences have shown that the more politicians are taking sides before there is a sound advise from experts, or at least good options prepared, the worse at the end of the day we all are. So, I would say, we are open to the discussion, to the proposals, but I wouldn't say that at this time it would be appropriate to make a kind of a final judgment because we still need to be engaged with the European Commission, with our own trilateral experts and we have to simply get a full picture before governments make final decisions. But I would like to avoid the kind of mistakes of the past when after long talking, after mutual accusations from time to time we end up with frankly nothing. And we have that kind of experience.

BNS: Do you have any schedule when Baltics, maybe with Poland, should reach an agreement?

Rinkēvičs: Not to my knowledge, but this question is a bit more to the minister of economy.

BNS: Thank you for your answers.

The Lithuanian Finance Ministry on Wednesday appointed Darius Degutis , a diplomat, as...

Belarus ian Ambassador to Lithuania Alexaner Korol was on Thursday handed a note, urging him to...