Kwasniewski, in Vilnius, says Russia has to stop seeing Ukraine as artificial state

BNS EN
Russia's aspirations to regain its influence in Ukraine can only be changed if it stops seeing Ukraine as "an artificial state", Poland's former President Aleksander Kwasniewski said in Vilnius on Thursday. 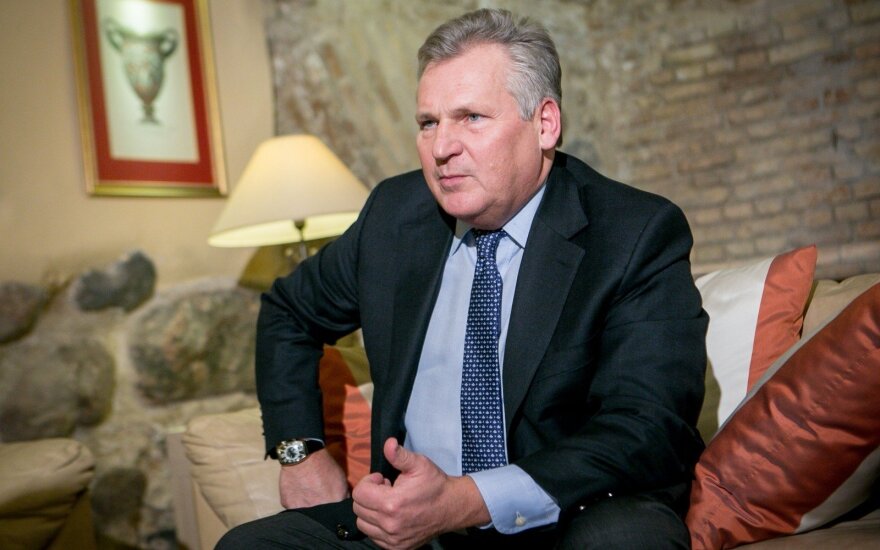 Speaking during a discussion held to mark the 25th anniversary of Lithuania's international recognition and UN membership, Kwasniewski expressed a positive opinion about Ukraine's efforts and its progress in carrying out democratic reforms.

However, in the former president's opinion, these changes are taking place too slowly, largely due to the Russia-supported military conflict in eastern Ukraine.

"The situation of Ukraine is extremely fragile. And in this reconstruction of the Russian superpower, Ukraine is absolutely needed, it's question number," Kwasniewski said.

"For the majority of Russians, especially for the Russian leadership, Ukraine is an artificial state, Ukrainians are an artificial nation. Of course, it is absolutely wrong (...). But as long as we have such Russian approach to the Ukrainian issue, it's very difficult to find a good solution," he said.

In Kwasniewski's opinion, the political and psychological situation in Europe is currently much worse than it was ten or 15 years ago, with a key factor being Russia's aspirations "to restore its spheres of influence" in Eastern Europe.

He underlined that the Baltic countries are in a much more favorable situation than Ukraine.

Lithuania's former President Valdas Adamkus identified a lack of unity in Europe on the Russian issue as a key problem in solving the current military crisis in Ukraine.

"Actually, I am concerned not about what Russians are doing -- it's very clear to me. But I'm concerned about the EU's position, which I see, is not a united front. Some of the countries are already saying, 'Let's maybe review our attitude, our position taken in defending that solidarity principle'. I hope that it's only a temporary position and the EU is not going to give up," he said during the same discussion.

Adamkus noted that it is difficult to have confidence in Russia, which is demonstrating "a radical, arrogant position."

"I don't see the Russian foreign policy being different from that that was started with Tsars, changed the name and color with communism. And the new so-called democratic Russia is just continuing the same policies, taking an arrogant position among the European countries. And that's what really creates, I'd say, distrust in the country. You cannot actually accept their words and agreements," he said.