Euromaidan Press | Paul A. Goble
aA
Speaking in Russian-occupied Crimea, Federation Council Speaker Valentina Matviyenko on Friday gave the clearest sign yet that the Kremlin plans to expand its efforts to mobilize Russians and Russian speakers in the former Soviet republics and Baltic states, people she says are loyal to their new countries but remain Russian compatriots. 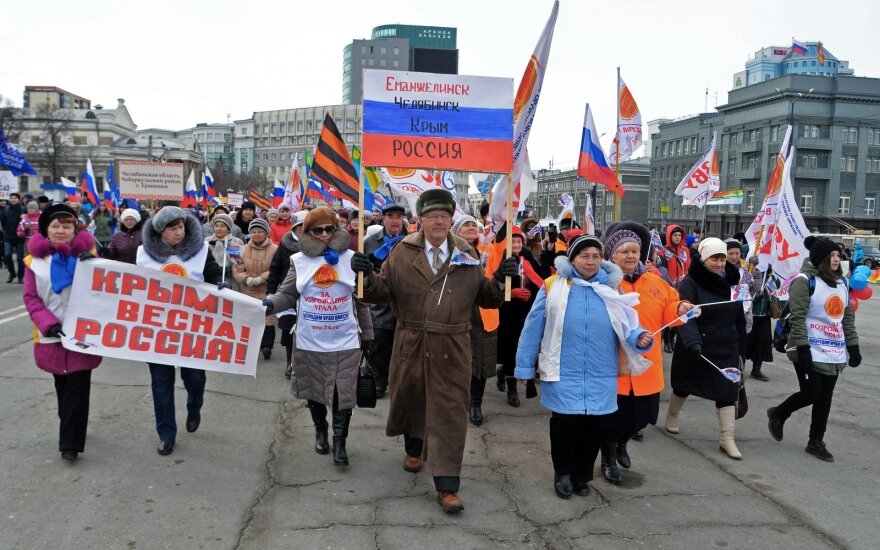 Russia does not want any longer to “sit quietly by and watch” as ethnic Russians and Russian speakers “in certain former republics of the USSR” are subject to become objects of “oppression and persecution” regarding their education and language rights, she insists.

Matviyenko says that “one can offer a mass of example of discrimination” against them, adding that “we know what is going on in this sphere in Latvia, Estonia and Ukraine,” as well as “in a number of other countries” including Belarus and Moldova. All this is unacceptable, and “Russia has supported and will support its foreign compatriots.”

According to the Federation Council head, “Russian compatriots beyond the borders of Russia wherever they live must have the opportunity to preserve their ties with their historical motherland, to study Russian language and culture, and to feel themselves to be Russian [‘russkiye’] people.”

She adds that “in certain countries,” governments and others are whipping up Russophobia and undertaking efforts to “isolate their citizens from the great Russian culture” under the pretext that the bearers of that culture are supposedly disloyal to the countries in which they live.

“If one calls things by their right names, this policy is unworthy,” Matviyenko says. “There are large numbers of Russians in Ukraine, in Belarus, Moldova and the Baltic countries… No one has ever produced facts or examples of their disloyalty or their support of the political and economic interests of Russia to the harm of the interests of the countries where they live.”

Matviyenko’s statement is breathtaking in its flight from reality – she speaks of “the former republics of the USSR” rather than the more normal locution “the republics of the former USSR,” for example – but perhaps the most damning part of her remarks is that they took place in Crimea, a part of Ukraine that Moscow invaded militarily in the name of helping Russians against Kyiv.

Artūras Morozovas, a Lithuanian photojournalist who recently returned from Crimea , spoke about how...