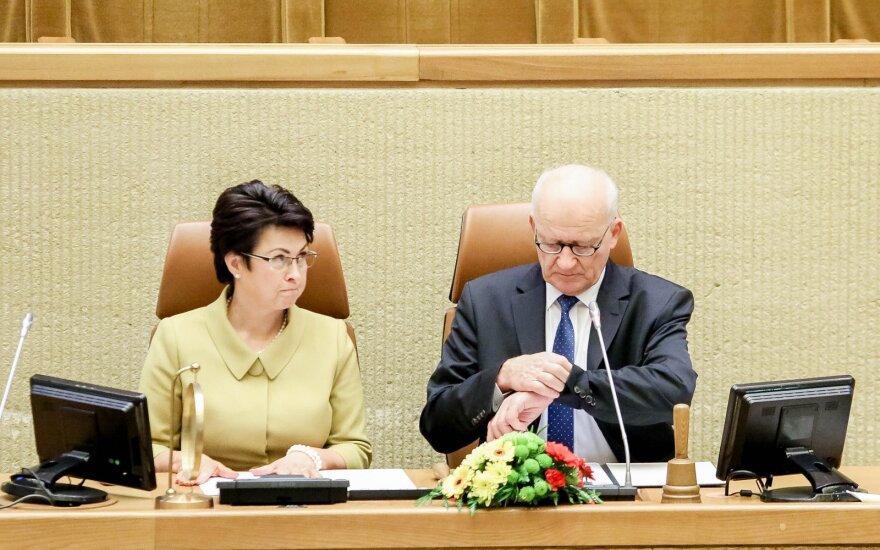 Earlier unofficial information appeared that “controlling” posts in parliamentary commissions and committees would go to the political powers which may officially not declare themselves the opposition, such as the Polish Electoral Action in Lithuania – Christian Families Union. It was stated that supposedly the Seimas Audit Committee would be headed by a member of the aforementioned party. Alfa.lt spoke to the Peasant Greens leader Karbauskis, who denied this.

“Without divining from coffee stains, I’ll say one thing, that in the [Seimas] statute it is specified that [“controlling” posts in committees] belong to the opposition and we will definitely not do otherwise than the statute specifies. Simply put, all the talks about this, how it could be, are without basis,” explained Karbauskis, noting that it is likely that the Conservatives or the Liberals could take leading posts in the audit, budget and finance committees.

The Seimas Statute specifies that the Budget and Finance committee, as well as the Audit Committee chairman and his deputy are elected by the opposition fraction or coalition of fractions which contain more than half of the Seimas minority.

Sees no issue with other posts

The LPGU leader noted that the Conservatives and Liberals could also aim for the anti-corruption, as well as the ethics and procedures commissions leaderships.

“We see no issue with having a particularly strong opposition. What matters is that it be constructive. We aren’t seeking anyone to be weaker or having less. The stronger the opposition, the better for this government,” explained Karbauskis. That said, it will only become clear who will run for the seats of Seimas committee and commission leadership.

The Homeland Union – Lithuanian Christian Democrat (TS-LKD) leader Gabrielius Landsbergis told Alfa.lt that he awaits the coalition’s decision on distributing leadership of various committees. He said he believes that the “Peasants” and Social Democrats will follow the earlier example of the previous Conservative and Liberal coalition.

“This is a choice. We will see how true and honest the proposal that the opposition should control the coalition is. In 2008-2012 the Homeland Union and Liberal coalition thought that their goals are the same that is that both the coalition and the opposition are for a transparent Lithuania, for an effective functioning of the state. Because of this the Seimas Audit Committee leader post was given to the Labour Party under goodwill, while it, to be honest, truly did put in every effort to control the coalition from the opposition, which is, in my opinion, a good thing,” explained Landsbergis.
Alfa.lt reminds that the 2008-2012 Seimas Audit Committee was headed by the then Labour Party member Loreta Graužinienė.

The Conservative leader stated that they have had no official talks with the Liberal Movement on who from the opposition will be delegated to lead the anti-corruption, ethics and procedures commissions and Audit Committee.

“Our attention is leaning to the Seimas Audit Committee, to a leading position there because we think that we truly have members who could take up that role,” admitted the TS-LKD leader.
“We have Ingrida Šimonytė, we have Agnė Bilotaitė,” Landsbergis named potential candidates.

Liberals aiming for one position

Eugenijus Gentvilas, the future prefect of the Liberal Movement fraction, which intends to be a separate opposition force in the Seimas to Landsbergis’ Conservatives, has told Alfa.lt that he believes that the “Peasants” will not break tradition and will cede the “controlling” posts to the opposition.

“Now that thought was expressed and probably a number of times, I think that they can act respectably. If three fractions declare themselves as opposition, then it could be a simple split,” assured Gentvilas, addint that “Well, I am simply not thinking of the other fractions. Our fraction would seek to have Vitalijus Gailius lead the Seimas Anti-Corruption Commission.”

According to Gentvilas, it would not be realistic for his party to expect more “controlling” posts in Seimas.

Karbauskis has news for citizens on benefits