Juncker address and its significance for Lithuania

aA
The President of the European Commission Jean-Claude Juncker made the annual State of the Union address in the European Parliament on Wednesday. He touched upon a number of topics that are particularly significant for Lithuania which range from refugees to border control and military union. 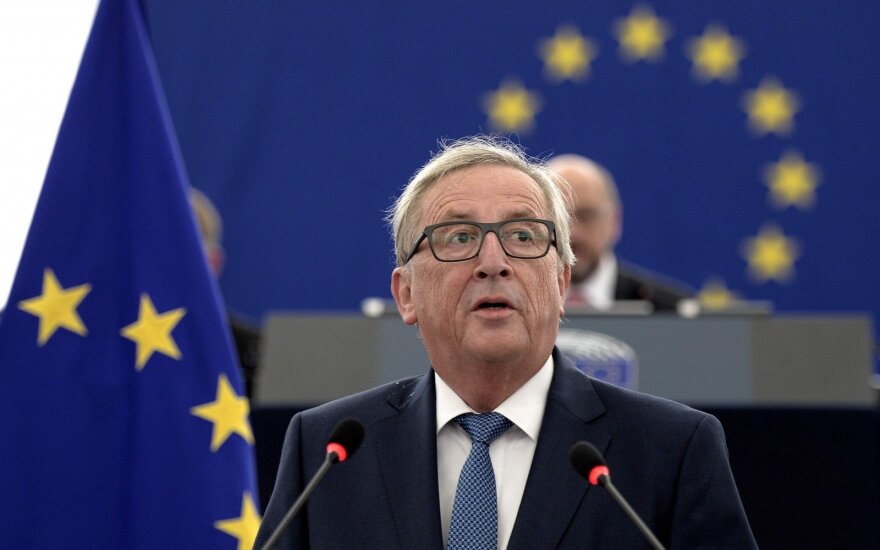 “And when it comes to managing the refugee crisis, we have started to see solidarity. I am convinced much more solidarity is needed. But I also know that solidarity must be given voluntarily. It must come from the heart. It cannot be forced.”

This could be a sign of Brussel’s shifting to a softer stance on refugee quotas. The Lithuanian government has so far had a moderate stance on the matter, accepting the quotas set for it, but not accepting the quotas being mandatory. For comparison the Visegrad states have been vehemently against accepting refugees under a quota system, while Germany and Southern European states, flooded by refugees, are in favour of mandatory quotas. Juncker’s comments mostly mirror the Lithuanian government’s stance.

“And this is why the Commission stands behind our proposal on the Posting of Workers Directive. The internal market is not a place where Eastern European workers can be exploited or subjected to lower social standards. Europe is not the Wild West, but a social market economy.”
This shows support for the principle of “equal wages for equal work in the same place” which the less affluent Eastern European states have been opposing. The Lithuanian government is concerned that the adoption of such a direction could make Lithuanian businesses lose their competitive advantage of lower wages.

“I have to take into account both levels of democracy of our Union, which are both equally important. We are not the United States of Europe. Our European Union is much more complex. “
With Eurosceptic sentiment on the rise in many of the larger EU states, the EU President of the European Commission stressed the importance of the member states several times during his speech, at the same time however he held back from directly criticising EU institutions. This could be seen as an effort to listen in on the voices that the idea of deeper integration supported by EU elites does not adhere to the expectations of many Europeans and that the unelected Brussels bureaucrats have become detached from the people.

“Investment means jobs. Today, I propose to double the duration of the Fund and double its financial capacity.”

Jean-Claude Juncker proposed to double the EU investment fund to €630 billion by 2022, thus encouraging economic growth. Lithuania was initially rather skeptical of this initiative, but the use of this instrument has gained momentum over the past few months.
International trade

J-C. Juncker’s speech had no mention of the free trade agreement with the United States. This could be a sign of him personally losing hope to come to an agreement this year. Based on survey data Lithuanians are the greatest supporters of this agreement, which is mirrored by the government. The failure of the agreement would be seen as a failure by the Lithuanian government, both due to lost business opportunities, as well as its geopolitical repercussions which could reduce US presence in Europe.

“We need to know who is crossing our borders. (…) We should also move towards common military assets, in some cases owned by the EU. And, of course, in full complementary with NATO.”
Juncker expressed firm support for a common EU border guard and stricter individual screening at the EU external border. Though these suggestions are a reaction to the refugee crisis, Lithuania hopes that this could also help strengthen the Lithuanian border controls with Russia and Belarus. The representative of the European Commission also urged closer military cooperation and the establishment of an EU operations headquarters. Lithuania is cautious regarding the concept of the EU as a military union, concerned over such a move potentially lessening the influence of NATO and the United States.

Jean-Claude Juncker , President of the European Commission , is facing growing criticism from the...

The unspoken about the European Union Army (1)