BNS
aA
Israeli Prime Minister Benjamin Netanyahu on Monday thanked Lithuania for its initiative to invite him to a meeting with EU foreign ministers. 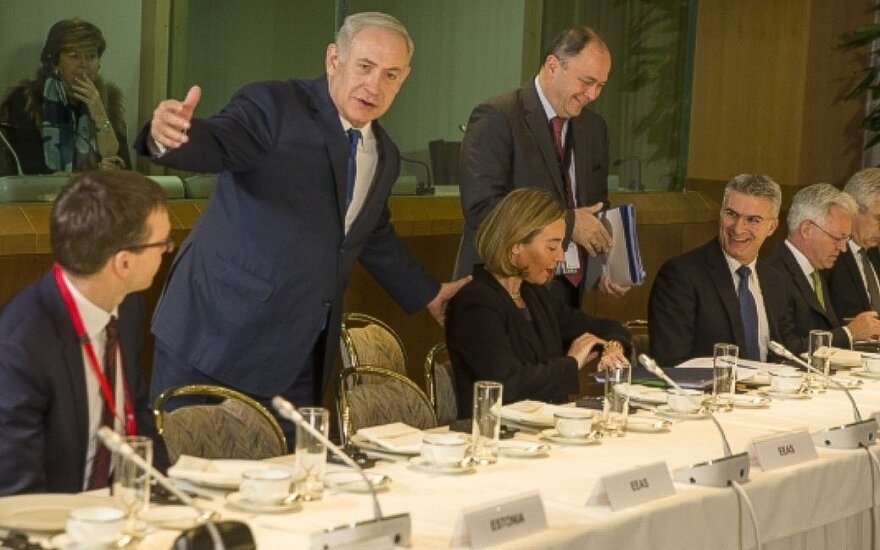 It was the first visit by an Israeli prime minister to the EU headquarters in Brussels in more than 20 years.

In response to the initiative, Federica Mogherini, the bloc's foreign policy chief who chairs EU foreign ministers' meetings, formally invited the Israeli prime minister on behalf of the EU shortly afterwards. However, she also sent a similar invitation to Palestinian President Mahmoud Abbas.

"I thank you for this invitation Federica, and also to the government of Lithuania", Netanyahu said at the start of a news conference.

Linkevičius said that the meeting over the breakfast table had lasted for over two hours, longer than planned.

Lithuania has in the past decade become one of the strongest diplomatic supporters of Israel in the EU. Many other European countries take a tougher stance toward Israel over the expansion of settlements in the occupied West Bank.

Linkevičius says that despite differences in positions, direct dialog is necessary if the EU wants a more active involvement in the Middle East peace process.

"The key thing Israel seeks is the right for Israel to exist as a state. The continuous rocket shelling from the Gaza Strip, suicide attacks and terror acts show that there is no such reconciliation, and, in the Israeli prime minister's opinion, this is the main reason why there is no such understanding," he said.

Monday's meeting in Brussels came shortly after US President Donald Trump recognized Jerusalem as Israel's capital. Many European politicians have warned that the step may hamper the peace talks.