BNS
During the official opening of Israel's first Embassy to Lithuania on Thursday, diplomats emphasized the exceptional importance of Vilnius in the Jewish history. 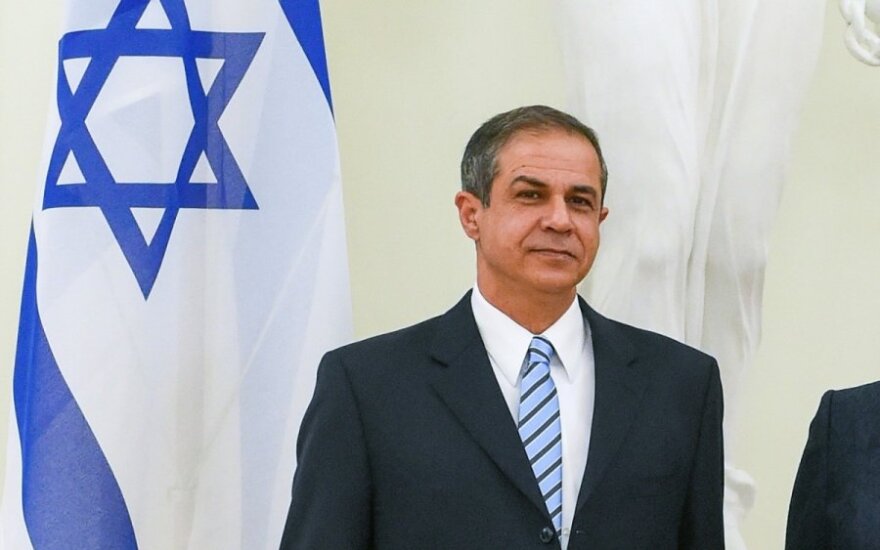 The Israeli Foreign Ministry's Political Director Alon Ushpiz noted during the ceremony that Jews were invited to Vilnius by the grand dukes of Lithuania, Gediminas and Vytautas, back in the fourteenth century, and Vilnius had acquired the name of Jerusalem of Lithuania.

"Flying a flag here in Vilnius carries a special significance. This is a country which is a cornerstone in Jewish heritage, where some of the great Jewish thinkers came from," said the diplomat.

Up until now, Israel's ambassador to Lithuania used to reside in Riga. Amir Maimon has been appointed as the first ambassador who will have his residence in Vilnius.

During the opening ceremony, a rabbi nailed a mezuzah – a box with a piece of parchment - to the doorframe.

Jewish communities in Lithuania have a long and sometimes troubled history. Some 90 percent of Lithuania's pre-war Jewish population of more than 200,000 was annihilated by the Nazis and their local collaborators during World War II. About 8,000 Jews of Lithuania were rescued during the war, and a similar number survived after escaping to the Soviet Union.

The Israel-based Yad Vashem center of Holocaust studies has recognized more than 800 Lithuanians Righteous Among Nations for rescuing Jews, with new names added to the list on a regular basis.

Lithuania's current Jewish population is about 3,000. 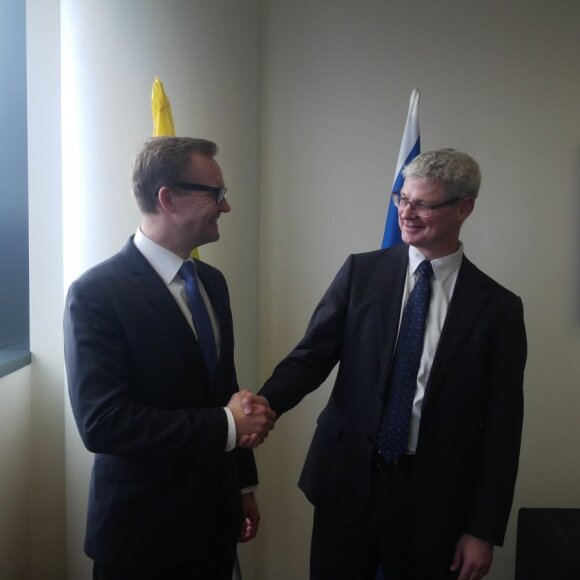 This is a special honour for me to join you here today, at the official inauguration of the Embassy of Israel in Vilnius, Lithuania. this is, for many Israelis and Jews (and not only for Israeli diplomats...), a special moment and a dream come true.

Israel formally recognised Lithuania's independence in 1992 and now, after 23 years of full diplomatic relations, we are opening our second Embassy in the Baltics, in a country which's history is intertwined with Jewish history. I would like to especially mentioned Foreign Minister Lieberman (who visited here last September), who made this happen, and helped overcome all the budget constraints - not an easy task in today's day and age.

As a symbol of the importance we regard to our relationship and upon the suggestion of Ambassador Maimon, we decided to inaugurate the Embassy here, in conjunction with the 25 year celebrations of independence of Lithuania. Indeed, this is a festive occasion, to hold this event the morning after the celebrations.

Additionally, we were keen on combining this event with a political dialogue between our 2 countries, putting even more substance into this occasion.

Thus, together with my colleagues, Ronaldas Kačinskas, we spent the morning covering a wide range of issues that both our countries are dealing with and concerned about - from regional issues in the Middle East, to Issues close to this region, bilateral affairs and much more. It is through such close interactions that we are able to understand each other better and further promote issues of mutual interest, as well as identifying additional areas for cooperation.

Indeed, the goal of opening an Embassy is not merely flying a flag, but rather a tool and facilitator in advancing relations. We have, to date, over 100 Missions abroad and each one of them carries significance of some sort. Flying a flag, however, here in Vilnius, carries a special significance. This is a country which is a cornerstone in Jewish heritage, where some of the great Jewish thinkers came from. A place which saw the ingathering of Jews since the 12th Century, from all over Europe and from all walks of life religious scholars, academics, artists, farmers and many more. later, thanks to Lithuanian leaders as Gediminas and his grandson Vytautas Jews found a home in Lithuania. In Jewish tradition, as many of you know, Vilnius is nicknamed "Jerusalem of Lithuania".

Almost two years ago (July 2013) President Shimon Peres visited Lithuania, where he had the privilege to meet President Grybauskaitė and partake in the 70 year memorial service for the Jews of the Vilnius Ghetto.

For Israelis and Jews, the connection and relations with Lithuania are more than merely a connection between 2 friendly countries. This is an emotional connection between two peoples, with a shared history (not always rosy) and from a Jewish angle - a connection with a country with a once thriving Jewish community and a heritage wich is widely known and cherished.

one cannot avoid thinking about "what if"? what if a higher percentage of the 5% of Lithuanian Jews who survived the horrors of the Holocaust would have been even one percent higher? What if there were not 871 brave Lithuanians who risked their lives in order to save jews, but 872 of them? Would there have been another great leader? Another great scholar? Perhaps a figure who would come up with another great Startup, or a cure for Ebola?

All these questions will continue to remain unanswered and as President Peres referred to his visit, he said: "I am coming to Vilnius with really a mixed feeling," and continued: "We cannot change the past so we don't have to forget it. But we can change the future and that we should always remember". In Israel today there are several thousand Lithuanian Jews, a community that serves as both a living heritage in Israel and as a bridge between our countries today and for years to come.

It is indeed upon us to look into the future and enrich the relations between our two countries in areas we both care deeply about whether in the Hi-Tech and Biomed fields, in Cyber cooperation, on Political issues, tourism and many more fields. That is what cooperation is about and that is what friendship is about.

I would like to take this opportunity to thank the Government of Lithuania for hosting us here and wish much success to Ambassador Amir, Deputy Chief of Mission Yehuda and their team in taking the relations between our two countries to the next levels.

On Thursday, the Political Director of the Ministry of Foreign Affairs of Israel Alon Ushpiz met...

A unique Vilnius Jewish archive, which was scattered during the Holocaust , will be revived in a...