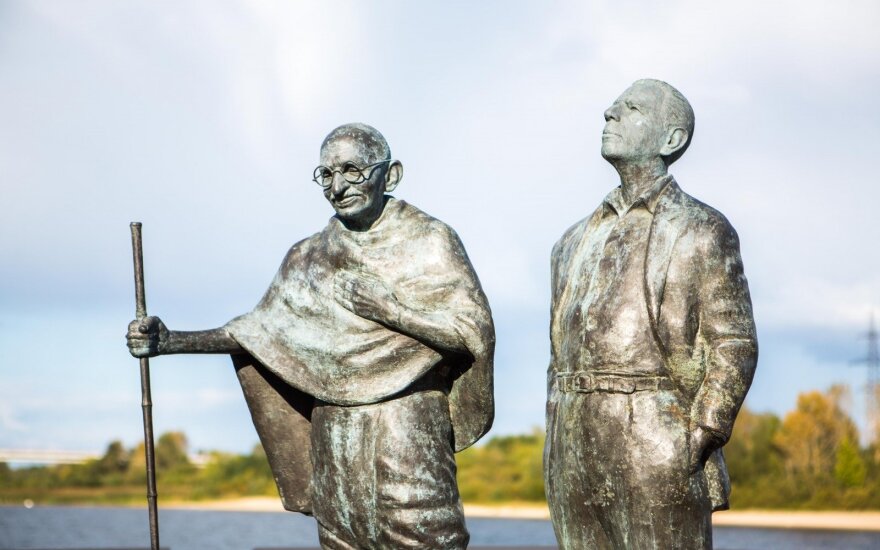 The book has been produced by the Lithuanian Embassy in New Delhi and is dedicated to the 25th anniversary of Indo-Lithuanian diplomatic relations.

“We believe that this important publication will further increase Kolkata’s interest in Lithuania, a small European nation with which Kolkata already shares many things in common,” said the ambassador during the book launch.

The book featuring Gandhi and three Lithuanians, Poška, Vydūnas and Kallenbach on its cover, contains seven articles on historical personalities who contributed to the forging of the special connect between two geographically distant nations.

For example, Hermann Kallenbach was Gandhiji’s closest associate during his South African times, his ‘soulmate.’

Meanwhile, Antanas Poška traveled from Lithuania to India on a motorbike in 1931, a journey that to this day would be hard to accomplish. Poška’s legacy served as a source of inspiration to generations of Lithuanians. The University of Calcutta also honored him with a posthumous D.Litt in 2014. More information on Poška available here.

“It is unique that Kolkata and West Bengal takes such a central role in the Indo-Lithuanian relationship and we must definitely try to build on that,” said Arvind Sukhani, Lithuania’s Honorary Consul in West Bengal, who co-sponsored the publication.

Over the last three years, Mr. Sukhani and the Lithuanian Embassy have arranged a number of important events in Kolkata, to promote public awareness about Lithuania.

Thus, in 2014, a philatelic exhibition featuring the coats of arms of Lithuanian towns and provinces was set up at the Conclave Club.

The same year, a renowned Lithuanian dancer Loreta Juodkaitė attended the Kolkata International Theater Festival, where she performed a mind-blowing solo act called ‘Salamandra’s dream.’ This included an almost one hour of vertigo spinning, an exercise so physically exhausting that only a few actors dare to perform it.

In 2016, when Lithuania inaugurated its Honorary Consulate in Kolkata, the Bengali edition of “The History of Lithuania” book was officially released. This edition represents the first of its kind in any South Asian language.

In February next year, the Republic of Lithuania will celebrate its Centenary. This will serve as yet another opportunity to present Lithuania to the citizens of Kolkata, both Mr. Sukhani and the ambassador maintain.

India and Lithuania established their diplomatic relations on 27 April 1992.

Prime Minister of Lithuania , HE Mr Algirdas Butkevičius , was the chief guest at a grand reception...

India and Lithuania agree to deepen cultural and economic ties

In a high-level interaction between India and Lithuania, the Vice President of India, Dr. Mohammed...

Mr M. J. Akbar, Minister of State for External Affairs, Government of India , and his delegation will...

The Lithuanian government on Wednesday gave the green light for recalling the country's ambassadors...