Implementing EU trade deals in the borderlands could prove complex

STRATFOR
aA
Talks have begun between Russia and the pro-EU former Soviet states of Ukraine, Moldova and Georgia. The sides are assessing how recently signed free trade deals with the European Union will impact the countries' trade relations with Russia. The effect will be muted for now, but the agreements could have a larger impact in the future if each country adopts them fully. Full implementation will be challenging because of Russia's influence and political instability in the three nations.
Analysis 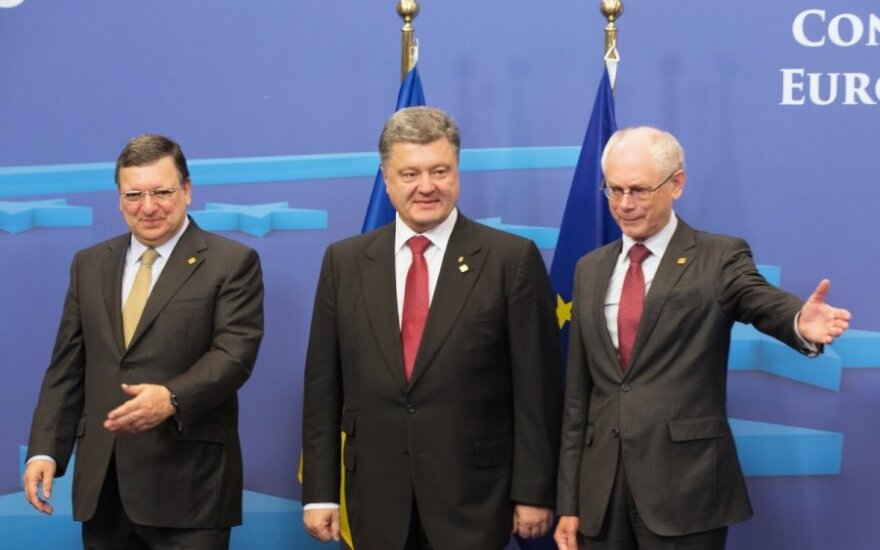 The signing of the EU association and free trade agreements by Ukraine, Moldova and Georgia on June 27 marked a new phase in their political and economic relationships with the European bloc. While the political ramifications of the agreements are evident in the growing competition between Russia and the European Union, the economic changes are not yet clear and will vary in scope.

The goal of the EU deals is to remove customs tariffs and trade barriers in order to expand trade and increase economic integration between the European Union and these countries. The bloc has set ambitious goals for free trade deals. According to a European Commission report, the European Union and Ukraine are set to eliminate 98 percent of trade duties on EU products and 99 percent on Ukrainian products in the next decade. The commission also predicts that the free trade agreement will increase Georgia's exports to the European Union by 12 percent and imports by 7.5 percent. The study reports that Georgia's gross domestic product could increase by more than 4 percent in the long term, "provided that the Deep and Comprehensive Free Trade Agreement is implemented and its effects sustained."

Implementation is a crucial aspect of the free trade agreements. Not all goods will be subject to tariff eliminations right away, and some will be deferred for quite a long time. For instance, certain products labeled as "sensitive" will be protected from the removal of tariffs, including steel, agricultural goods and products from Ukraine's automotive sector. These goods are not competitive on the EU market, and thus the complete elimination of tariffs on them would significantly hurt Ukrainian industry. Removing duties on such products could take as long as 10 years.

Therefore, the complete impact of the free trade deals will not be evident for quite a while. However, the deals are keeping with the larger EU strategy to expand ties and influence in its periphery, particularly when it comes to former Soviet states. The very nature of the bloc's Eastern Partnership program, which Poland and Sweden proposed in 2009, is to build long-term EU influence in the former Soviet periphery on a grassroots level. The efforts have contributed to EU (and especially Polish) support for pro-Western opposition groups and nongovernmental organizations in former Soviet countries such as Ukraine and Belarus, as well as long-term financial assistance and investment packages for these countries. The intent of the free trade deals with Ukraine, Moldova and Georgia is to open EU markets to exports and to offer investment and reform-related assistance to modernize the countries' economies, making them more competitive in the European market.
The Russia Factor

While the effects of EU free trade agreements will be significant in the long term, the effect on trade with Russia may be immediate.

After the European Union, Russia is the largest market for each country's exports. Each country's trade with Russia has been subject to intense volatility, however, primarily because of fluctuations in political relations. For example, Russia completely cut off trade ties with Georgia after the 2008 Russo-Georgian War, and Moscow has restricted key goods, such as agricultural and dairy products, from Ukraine and Moldova at times of political tension between the countries. Ukraine's trade with Russia has fallen by nearly 25 percent yearly, largely in the energy sector, because of tensions over the crisis in Ukraine.

The EU free trade and association deals, which pose a political threat to Moscow because they draw these countries closer to the West, create more motivation for significant trade restrictions. Indeed, Russian officials have warned that the deals could hurt the three countries' trade ties with Russia. The board of the Eurasian Economic Commission, an economic bloc comprising Russia, Belarus and Kazakhstan, met July 16 to discuss imposing "protective measures" on Ukraine, Moldova and Georgia. The Moscow-led Commonwealth of Independent States free trade zone, to which Ukraine and Moldova are both parties, will also have to be renegotiated.

Each of these countries has experienced Russian trade restrictions, but new restrictions or cutoffs could still have significant economic repercussions. For example, the chairman of Moldova's National Union of Agricultural Producers' Associations said July 15 that if Russia were to ban imports of fruit (the country's largest export to Russia, constituting nearly 15 percent of total exports), it would be a "disaster for local fruit producers." Moscow may not be able to completely cripple the economies of these countries, but it can inflict substantial pain in certain sectors. These countries have been able to divert trade to other markets in certain cases (as with Georgia and its wine exports), but other cases may prove more difficult.

Russia is in a better position to tolerate such trade restrictions, though Moscow would not want to see export levels fall too intensely, especially considering its stagnant economy. Moreover, certain Ukrainian products, such as helicopter engines and rocket parts, would be difficult for Russia to replace. Still, Moscow has often been willing to sacrifice economic gains for politics, particularly in former Soviet states.

The signing of the free trade deals does not necessarily mean Russia will enact major trade restrictions. Russia's talks with the European Union, Ukraine, Moldova and Georgia about the deals' potential effects suggests that Moscow is willing to cooperate to the extent that it fits with its political objectives. The Ukrainian Foreign Ministry has stated that it expects Russia to present estimates of potential risks to its trade with Moscow by July 20, with further consultations to be held in mid-September.

Moreover, trade has actually increased recently in certain cases. Georgia and Russia resumed trade after the emergence of the Georgian Dream movement, which has taken the reins in Tbilisi. While still pursuing integration with the West, the Georgian Dream government has had a more pragmatic relationship with Moscow than the anti-Russian former government of Mikhail Sakaashvili. This has led to a jump in trade from $46 million in 2012 to $190 million in 2013, a period that marked the Georgian Dream's first full year in power.

Trade between Russia and Georgia also reportedly increased more than 35 percent in the first five months of 2014, and Georgian officials have called consultations with Russia on the impact of the EU free trade deal useful and constructive. In response, Georgia has been much less aggressive in its relationship with Russia than under the previous administration. At the very least, it appears that deeper economic integration with the European Union will not necessarily come at the cost of trade with Russia but will depend on the political context of each country's relationship with Moscow.
Broader Constraints

The trade agreements are just one of many platforms in the competition between Russia and the West over the orientation of the borderland states. The manner in which this competition has played out in the realm of trade reflects each side's underlying strategy. Primarily motivated by countries most vulnerable to Russia, such as Poland and Lithuania, the European Union opts for long-term trade deals to build ties with these countries. This plays to the European Union's strength of pursuing small-scale and reform-oriented investment but falls short of crossing Russia's red line of full integration into the European Union and NATO. By offering deals short of full EU membership, the bloc can pursue closer integration without provoking the full ire of Russia or alienating Western European countries that are not interested in EU or NATO expansion.

For its part, Russia sees these deals as yet another setback in its periphery, a belief reinforced by the uprising in Ukraine and by the other countries' pursuit of a pro-Western path. But Moscow is not without leverage in these countries. Russia is still an important trade partner with each state, and that is not likely to change anytime soon, despite heightened restrictions. Russia also has significant influence in other economic areas, particularly evident in its energy ties and the large numbers of migrants from each country who work in Russia. Remittances, mostly from Russia, made up nearly 5 percent of gross domestic product in Ukraine, 11 percent in Georgia and 24 percent in Moldova. These are areas outside the realm of trade that will affect the countries' abilities to distance themselves from Russia.

Although each country is moving toward the West now, the trend is not definitive. Ukraine has been subject to wild political swings over the past decade, and the current Western orientation of the government cannot be assumed to last. Moldova, which will hold parliamentary elections in November, could also be subject to a change in government, and Georgia has already gone through a significant political shift in the past two years. Such political volatility can be expected to complicate the implementation of EU free trade deals and the likelihood that the countries will fully integrate with the West.

The Lithuanian parliament on July 10 adopted budget amendments to increase spending on national...

Opinion: Challenges in Europe and how Lithuanians should feel

These days, the international political scene has been shaken by two processes: the Kremlin’s...

The EU has signed association agreements with Georgia , Moldova and Ukraine in the margins of the...