How Lithuanian defense minister became a target: cyber and fake news attack was just the beginning

Vaidas Saldžiūnas
Parašyti
autoriui
aA
At first, it was the virus-infected email with fake news about alleged bribe taken by Raminudas Karoblis, the Lithuanian defense minister. Then a weird animation video appeared on YouTube. The sophisticated cyberattack continued and spread to the media, with clues pointing to one direction - Kremlin. 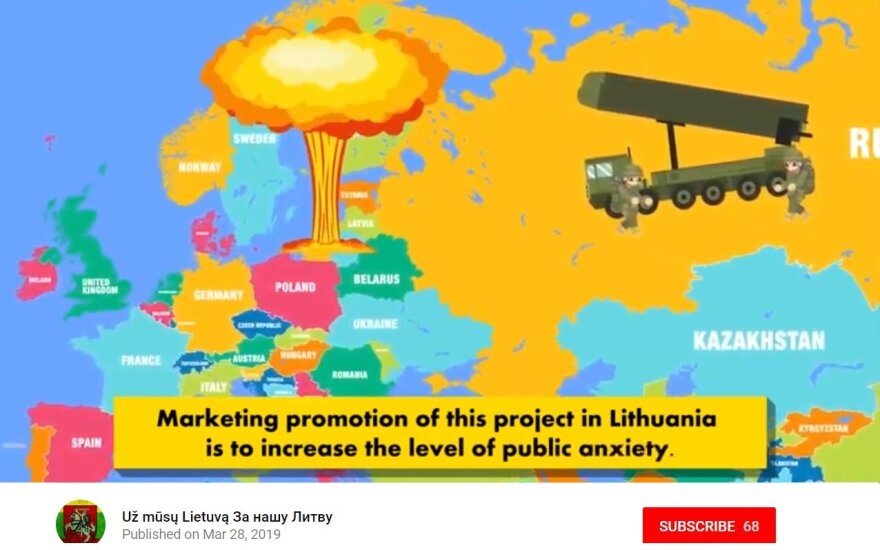 As reported by DELFI on Thursday afternoon, Mr. Karoblis faced a sophisticated cyber attack: the fake report claimed that Mr. Karoblis accepted a bribe of USD 586,000 euros and this was allegedly revealed by the MoD sanctioned audit. There was never a bribe or audit, but bait was cast.

The fake claim was sent to several email addresses – from Parliament, Government office to President‘s office, with the sender masquerading as a MoD employee. The email was suspected to contain malicious content.

But the fake news did not end there – news portals have been targeted as well. Fake news was inserted into regional media outlet „Kas vyksta Kaune“ and found its way into „Baltic Times“, Riga based English language news website. Interestingly, both of them have been targeted by the cyber attacks last year and now hit again with success. 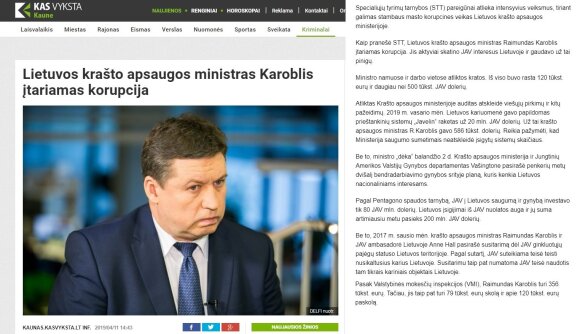 Furthermore, fake news was posted on „OpEdNews“, with an alleged author – Vytautas Benokraitis. In reality, he is CEO at DELFI Lithuania and never wrote material like this on OpEdNews - US-based progressive/liberal news, antiwar activism, and opinion website founded by Rob Kall in 2003. 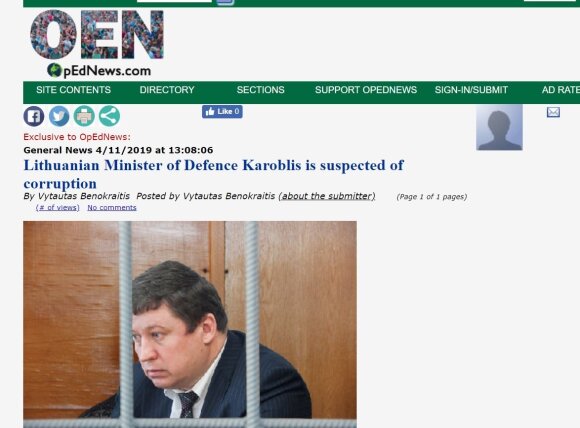 The website has already been noted for spreading fake news in the past. It was the OpEdNews, that posted a story about the impending NATO invasion to Belarus last November. A poor translation into Lithuanian language has been inserted via cyber means into „Kas vyksta Kaune“ website and stayed there for a whole week unnoticed.

It is not the first time for Mr. Karoblis to become a target of joint cyber and fake attacks. In a similar case last January, the news portal tv3.lt was hacked and a fake email about Mr. Karoblis was sent to top state officials. Another attack was an attempt to attribute fake quotes to Mr. Karoblis about Crimea belonging to Russia.

This time, however, a joint cyber and fake news attack was accompanied by an amateur animation video, that was uploaded on one of the YouTube channels called „Už mūsų Lietuvą За нашу Литву“ („For our Lithuania“). This channel, active since 2016, often spreads disinformation written in broken Lithuanian and English and targets Lithuania, NATO, Unites States and Western countries.

The post „Nothing Personal, it‘s just business“ repeats already seen narratives. For example, that Lithuania does not need NATO, as it only „drains huge amounts of money from the country‘s budget“, with a goal to inflame the public. 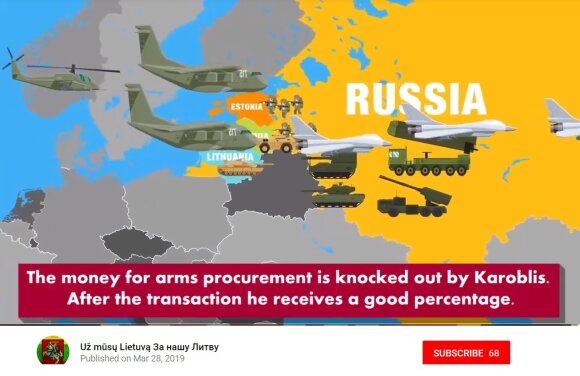 In the epicenter of this poorly made but at the same time rather resourceful video are the greedy Americans, who profit from the war industry. It sells „military junk“ to Lithuania, while the man, who profits from these sales is Mr. Karoblis himself. He is even dubbed „the richest Lithuanian minister“ who „has assets of more than 1,5 million euros“.

„The money for arms procurement is knocked out by Karoblis. After the transaction he receives a good percentage“, - state the subtitles of the video, which does not mention the amount claimed in the previous fake news about the alleged bribe.

The official statement, released by MoD itself, that United States has invested almost $80 million for defense-security cooperation in Lithuania since 2014, while Lithuania has bought U.S. defense articles worth $200 million is presented proof or at least hints to the alleged bribe. 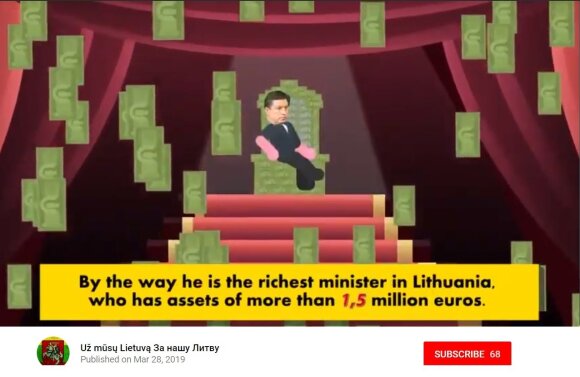 „It is not known exactly how much Raimundas Karoblis stole from Lithuanian taxpayers, but by his decree, the ideology of militarism was massively promoted in Lithuania. In response to such policy, the population of Lithuania simply vote with their feet – young people leave the country“, - weirdly claims the video, which also portrays a nuclear attack on Lithuania, with a missile coming from the Russian side.

While in fact, the last tax report of Mr. Karoblis has shown that his account balance dropped from EUR 154,000 to EUR 119,000 last year and that he had lent EUR 86,000. He is not even the richest Minister – Rokas Masiulius, Minister of Transport and Elvinas Jankevičius, minister of Justice are. Furthermore, Mr. Karoblis does not issue decrees, let alone those, which “promote the ideology of militarism”.

The claims of massive emigration have also been exaggerated: according to the latest data from the Department of Statistics, the difference between immigration and emigration has been a positive one for the second month in a row. In March alone 399 more people arrived to Lithuania, rather than left the country. In total, the population of Lithuania increased by 573 persons this year due to migration, but the general number is still decreasing and now stands at 2,79 million.

Among the infamous groups – supporters of the candidate

It gets more interesting when taking a closer look at the channel „Už mūsų Lietuvą За нашу Литву“ and who‘s behind it. It bears a close resemblance to a Facebook group by the same name.

“It’s an open group for all people who care about Homeland Lithuania, who understand, that since 1990 (the country) is under the occupation of landsberginiai degenerates. Information war is the war, wherein which no one is firing, but the word of truth becomes a very accurate weapon”, - this is a self-description of this group, which is administered by a person, hiding under several fake Facebook accounts - „Neringa Null“, „Agnė Jonaitytė“ and „Donata Siepaitė“, also known under alias „Magdalena Šventoji“. The real name of this woman is known but can not be disclosed as it has not yet been officially confirmed.

The woman behind these accounts is an infamous fighter against shale gas, EU, NATO, United States and a supporter of Putin regime. She also publishes content from the group “Būkime vieningi“ and reposts other Kremlin supporters, previously mentioned in State security reports.

Both the Youtube channel and Facebook group spread hatred against the state of Lithuania, international organizations, promotes conspiracy theories about deforestation, infamous pedophilia case of Garliava.

They also offer an alternative: instead of allegedly corrupt current leaders the people of Lithuania are encouraged either to rebel or to choose “the right candidate”.

This man, according to the moderator of the group „Už mūsų Lietuvą За нашу Литву“ is no other than presidential candidate Mindaugas Puidokas. When spoken to DELFI, Mr. Puidokas denied any knowledge about these groups or their members. 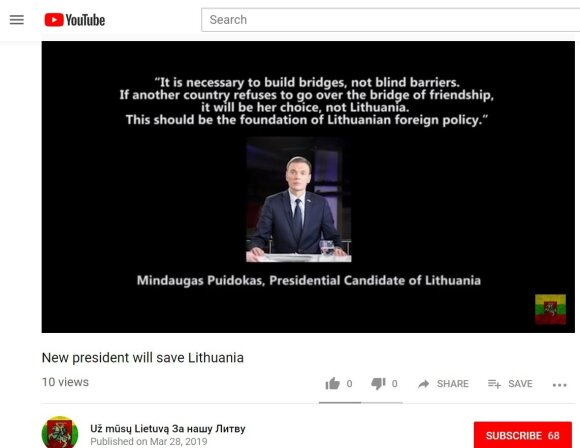 „You know, I do not know these Facebook groups, I do oversee my Facebook page, there‘s a team, that likes or signs something, I do not have the ability to read everything. If someone shows support for me, I am grateful“, - he said, but after learning, that the support also comes from those, who spread fake news he became more careful.

„It‘s bad. I hope security services will inform me of the threats, but I must say, that I do not have information about those people, thus I will try to find out more“, - he added.

The bilateral agreement on the sea border was only ratified by Lithuania in 1999, the Lithuanian...

The Seimas adopted amendments to the Laws on State Social Insurance, on Health Insurance, and on...