BNS
aA
A rally held in Vilnius on Friday in support to Hong Kong pro-democracy activists was overshadowed by a clash with Beijing supporters, two of whom were taken to a police station. 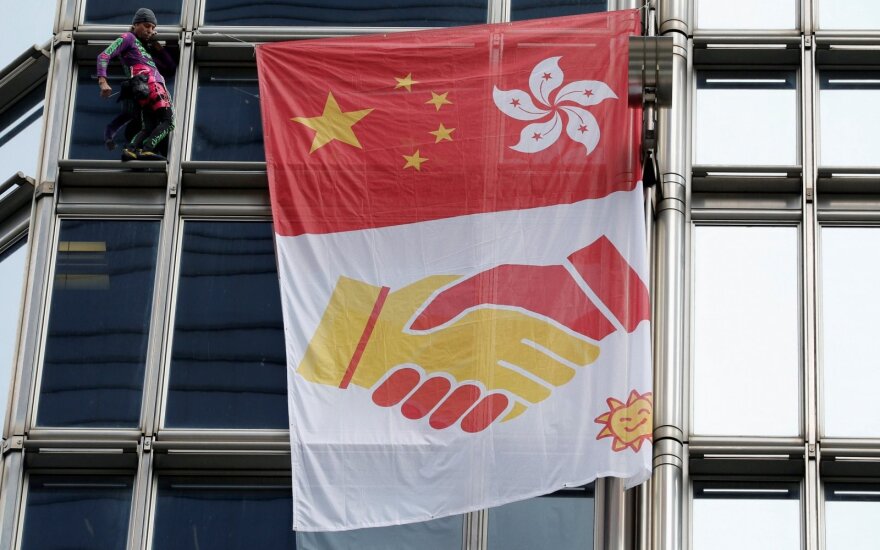 Just over 50 demonstrators gathered for the rally, organized by MP Mantas Adomenas, initially, but following a call for forming a human chain, a total of around 200 people joined hands in Vilnius' central Cathedral Square for several minutes.

It was a gesture of support to protesters in Hong Kong, some 8,000 kilometers away from Lithuania, who formed a human chain to protest against a bill on extradition to mainland China and police violence on the 30th anniversary of the 1989 Baltic Way.

Beijing supporters carrying Chinese flags, mostly Chinese people living in Lithuania, initially stood outside the square and watched the rally, but when the demonstrators began to disperse, they blended in among the initiators of the event.

Police officers arrived and began inquiring into the circumstances of the incident, and later took two of the counter-protestors away, a police spokesman confirmed to BNS.

Adomenas told BNS he planned to give a statement to police on Monday.

The lawmaker said earlier that the aim of the support rally was "to show Hong Kongers that they are seen and not forgotten".

"While we look at the Baltic Way as a beautiful, nostalgic memory, for Hong Kong, it is a situation where they are fighting now. For them, it is not a thing of the past," he told BNS.

Thirty years back, "every gesture of support from the free world was extremely important" for Lithuanians, the lawmaker noted.

The rally took place on the 30th anniversary of the Baltic Way, the 1989 peaceful anti-Soviet demonstration in which over a million Lithuanians, Latvians and Estonians formed a 600-kilometer human chain from Vilnius to Tallinn to demand an end to the Soviet occupation of their countries.

Lithuania's Ministry of Foreign Affairs on Monday summoned the Chinese ambassador and handed in a...