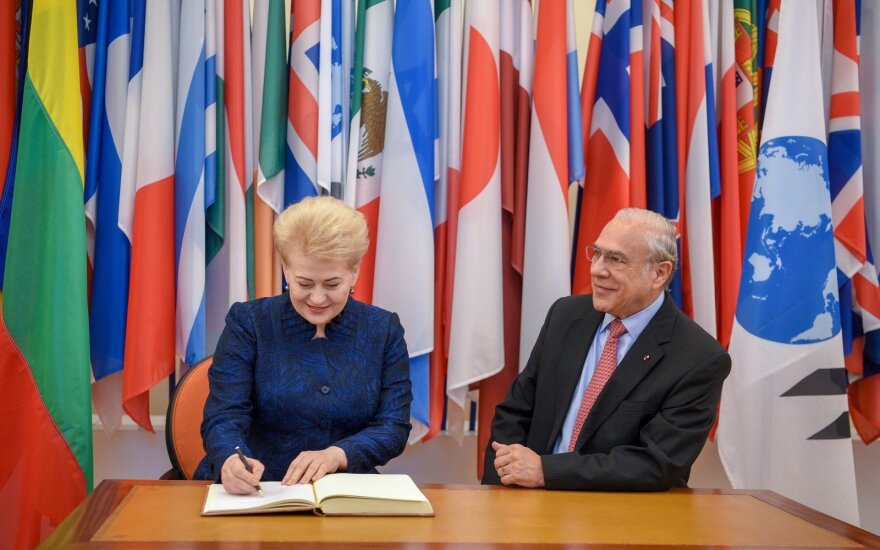 Lithuania on Monday officially finalized its membership talks with the OECD and expects to become its member in early May.

"The organization will further help Lithuania with its experts, expert knowledge to reform our country. It will help us to develop faster and will give our state a mark of quality," Grybauskaitė said after meeting with OECD Secretary General Angel Gurria on Monday.

"Three years of such direct negotiations mean a very fast pace. This organization is not used to membership being negotiated so fast. (...) All the more so because the window of opportunity to become a member is closing, because we know that some members of the organization no longer want to expand, at least temporarily. So I think that we finished the negotiations very much in time," she said.

The OECD secretary general said that Lithuania will be able to contribute to developing standards once its joins the organization and other members will be able to learn from its experience.

"Lithuania will now be part of the countries that design and develop and deliver the standards, rather than being a country that applies the standards made by somebody else. You will be part of process, part of discussion, but most importantly OECD countries will be able to learn a lot from Lithuania's experience," he said after the meeting.

Lithuania opened its OECD accession talks three years ago and has since implemented all key reforms to promote economic development and improve the well-being of people. At the end of May, the OECD Council of Ministers should make the final decision on Lithuania's entry. Lithuania will become the 36th member of the organization.

The OECD was founded in 1961 to speed up international economic recovery and trade relations among countries, as well as step up social protection of people.

Lithuania on Monday officially finalized its membership talks with the Organization for Economic...

Amid the declining population, Lithuania should tackle demographic problems and ensure quality of...

Romas Lazutka. The tax system is functioning, but only for the president and her favourites

Lithuania is ranked by the Organization for Economic Cooperation and Development (OECD) among the...

Lithuania expect to receive in June an invitation to join the Organization for Economic Cooperation...