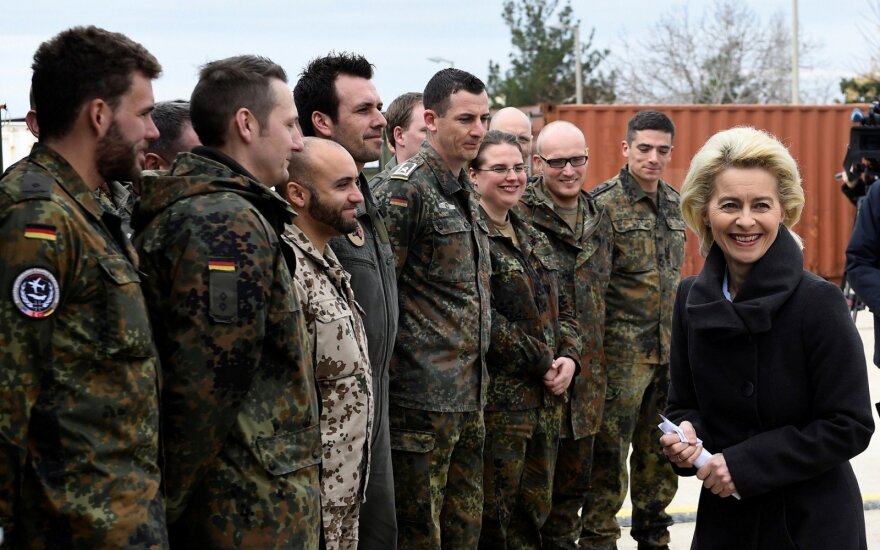 Von der Leyen told Lithuanian leaders and journalists that Germany will invest around 110 million euros in the development of the Baltic state's military infrastructure by 2021.

Von der Leyen also reiterated Germany's commitment to continue the deployment of its troops in Lithuania.

"We will stay here as long as the security situation requires it," von der Leyen said.

She visited the country to mark the second anniversary of the deployment of NATO's enhanced forward presence (eFP) battalion in Rukla, central Lithuania.

Germany leads an allied multinational battle group of around 1,200 soldiers sent to the country to strengthen defense amid tensions in the Eastern Europe.

Related articles
Identifying the biggest threats to the country, wanting to both punish and be friends
The future of Europe after Brexit: Lithuania and Germany?  (1)

According to the Lithuanian Defense Ministry, over the past two years around 8,000 soldiers from 9 allied NATO countries have served in the eFP battalion on a rotational basis.

"Lithuania and Germany enjoy the most successful cooperation in history in almost all areas, and intense bilateral military relations have already become an important part of the European security architecture," said Grybauskaite in a statement following her meeting with von der Leyen.

According to Grybauskaite, the German-led battalion "has become an integral part of Lithuanian defense".

Lithuania, a small Baltic country with a population of less than 3 million on NATO's eastern flank, has been stepping up its defense capabilities since 2014, citing security threats in the eastern Europe.

Who sympathises with German radicals in Lithuania?

Under the guise of their sense of national identity, anti-Ukrainian influence agencies in Lithuania...

Lithuania and Germany: a relationship that is better than ever before