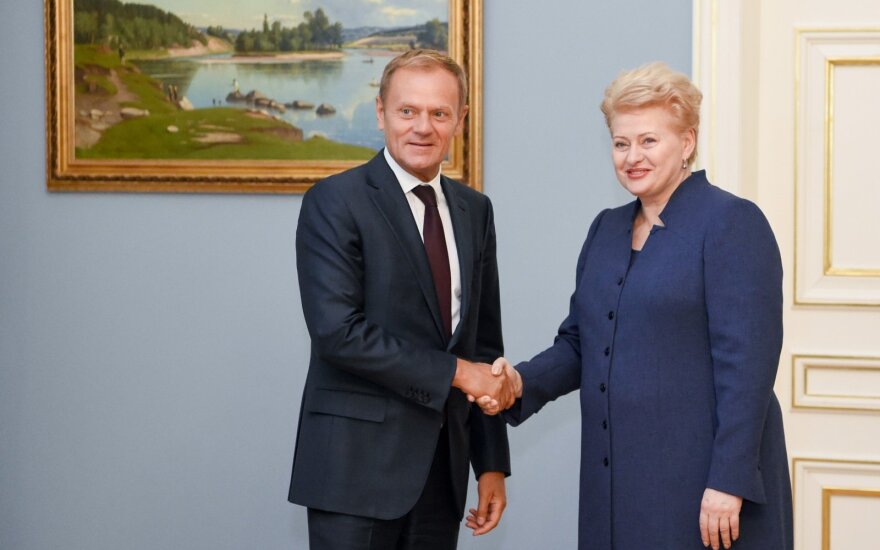 Linkevicius noted that Tusk was in part representing the part of Europe that includes Lithuania.

"Tusk, as Poland's ex-prime ministers, is still a representative of our region, and we appreciate this. In this case, the position of the majority of EU countries is what matters. It is my belief that the majority will support Tusk's appointment for another term. This is what we think," Linkevičius said at a joint news conference with Hungary's Foreign Minister Peter Szijjarto in Vilnius on Thursday.

The Hungarian minister said that Tusk's running for the post without support from the Polish government was a sensitive issue, however, refrained from commenting on the stance of Hungary's Prime Minister Viktor Orban who is considered a close ally with the leader of Poland's ruling bloc, Jaroslaw Kaczynski.

"It's undoubtebly, let's say, sensitive situation when a candidate is not supported by the government of the country where he or she comes from, but we leave it to our bosses to make a decision," said Szijjarto.

Earlier on Thursday, the Polish government threatened to derail the EU summit, if EU leaders re-elect Tusk to head the European Council regardless of its objections.

Hungarian Foreign Minister Peter Szijjarto said in Vilnius on Thursday that the EU's sanctions on...

The European Union (EU) should aim at ensuring safety of its population and economic development,...

The European Union should rely more on itself in the face of US President Donald Trump 's...

After signing the agreement on development of the European-gauge Rail Baltica railway in Tallinn on...