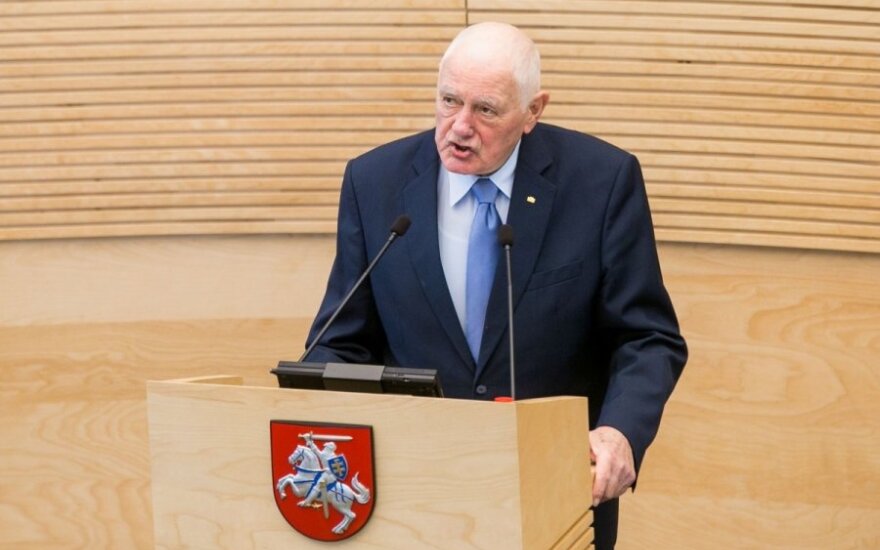 Former President attended the solemn inauguration ceremony together with his wife Alma Adamkienė.

He thinks that the second presidential term will be more about ensuring safety of the country and well-being of Lithuanian citizens.

Parliament speaker: By working together we can achieve more

Parliament Speaker Loreta Graužinienė congratulated President Grybauskaitė who started her second term of office. Speaker of the Seimas wished success and added that by working together they can achieved much for the benefit of Lithuania.

Graužinienė also wished for Grybauskaitė to achieve everything what she talked about in her address at the Seimas.

Parliament speaker noted that Grybauskaitė was the first woman to have become Lithuania's president.

"Our duty is to serve people of Lithuania with the highest dedication. We must acknowledge that there are no small problems or unimportant issues. We have committed and are responsible for the future of our country. Harmonious cooperation of all levels of government is a crucial condition to effectively solve issues significant to the state and the society," said speaker of the Seimas.

"Lithuanian people have once again showed their faith and elected you to be the head of the state. You are not only the first Lithuanian woman president, but also the first winner of the second presidency term," said Prime Minister Algirdas Butkevicius.

He congratulated the president and noted that faith bestowed by the people comforts but also puts great responsibility. Butkevičius added that one always has to be a leader and find the best solutions, look for compromises and make tough decisions.

"For the Sixteenth Government, cooperation with you has been a great challenge and very useful experience. The most important is that you have showed your support for our reforms and most beneficial solutions for Lithuanian people were adopted. I want to thank you for that," said Butkevičius.

The prime minister said that Grybauskaitė will continue to lead the country during strong international tensions which could not have been imagined several years ago. Butkevičius wished strength and success, as the president's success is a success of Lithuania.

"The Government is prepared to work with you as one team for the benefit of the people of Lithuania," according to Butkevičius.

The new team which will join the president during her second term has been announced on Saturday....

Inauguration events for Lithuanian President Dalia Grybauskaitė , who was re-elected for a second...