Flemish Minister-President on importance of economic cooperation with Lithuania

Ludo Segers ⎮ the Lithuania Tribune
aA
Belgium is a federal state and the regions, Flanders, Wallonia and Brussels each have exclusive jurisdiction in a number of important areas such as education, healthcare, economic affairs, culture and tourism. In many aspects of the daily life of the citizens, the Regions matter most. 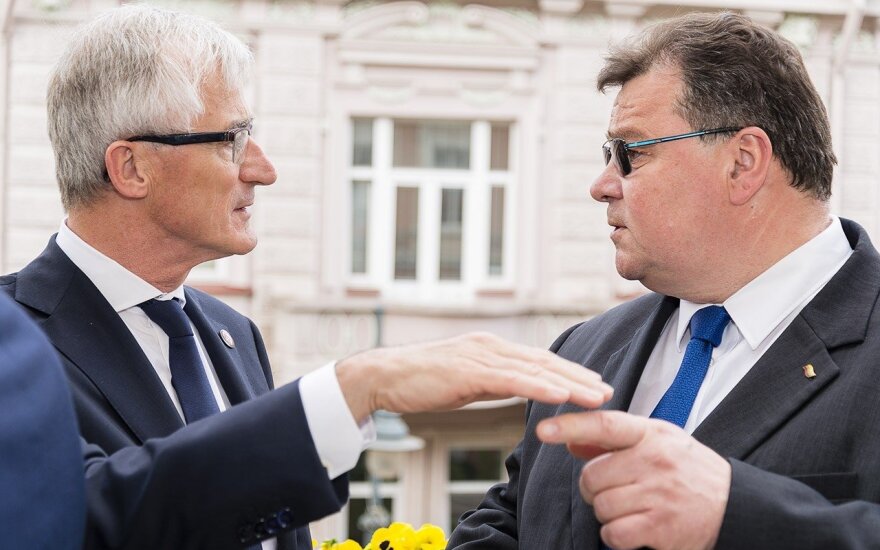 The Federal government has jurisdiction in the area of defence, communication, personal and corporate tax and most aspects of foreign affairs. Flanders accounts for about 60% of Belgium's population, but close to 70% economically, whilst exports from Flanders represent over 80% of the Belgian total. Flanders sits in the middle of the axis Amsterdam-Paris. Drawing a circle of 200 km around this axis demonstrates that no other area in the world has so much wealth and buying power.

It is in that respect that the visit to Lithuania by the Flemish Minister-President Geert Bourgeois earlier this week was significant. Lithuania is the largest trading partner in the Baltic region and the ice-free port of Klaipeda is important for the ports of Flanders, and Antwerp in particular. The Lithuania Tribune spoke with the Minister President, who shared his insights in a world where Flemish and Baltic companies have to compete and collaborate.

Lithuania Tribune: Minister-President what is the main purpose of your visit to Lithuania?

Flemish Minister-President Geert Bourgeois: The main reason is to strengthen ties. We have a long-standing relation with all three Baltic States, including Lithuania. We were among the first to sign a treaty with the three countries in 1996. There has been good cooperation in the past on a diplomatic, cultural and economic level. We think it is time to strengthen the ties, especially economic ties and trade. Flanders exports 1,28 billion Euros to the Baltic countries. Flanders is an export country. We export 3 times more on a per-capita basis than Germany. Of the Belgian exports, Flanders represents 83%. We see a lot of opportunity between the three Baltic States and Flanders. We are sure we can have better trade relations. Until the opening of [the Flanders Invest and Trade representative] office, we were serving the 3 Baltic States from St. Petersburg. It would be an understatement to say that this was not the best solution. Now that we have the office here (in Vilnius), I think we have made a good choice.

One of the first tasks of our representative will be to organise an economic mission of Flemish companies to the Baltic States and we hope that there will also be an economic mission organised from this Region. Such missions need to be well prepared with B2B contacts, interesting seminars, presentations, and economic related visits in order to create added value (for the participants).

There are many similarities between Flanders and Lithuania. We are both people with an entrepreneurial spirit, and we have a lot of family-owned companies. This means sustainable business and sustainable growth, and it adds reliability for both business partners. We are both port nations. Flanders is the gateway to Western Europe; we have within a radius of 500 km of our ports, 60% of the purchasing power of Europe. Conversely, we see the three Baltic States as the main entry point to serve the hinterland of Russia, Kazakhstan, Ukraine, and further on to China.

There are many opportunities for logistics. We try not only to transport between two points, but we like to add value. That is what we do at home, but that is also the goal of the logistic cluster here. We like to share our expertise, and clarify our policies, governmental actions, research centres and enterprises. There is already a lot of similar activity taking place here, perhaps not as focused. The main goal is to promote and stimulate trade and attract investment. That will be the main task of our representative.

LT: You signed this morning a Memorandum of Understanding in the area of Life Sciences and an agreement between the port of Antwerp and the one in Klaipeda. Life Sciences, logistics, the ports and IT - are those the main areas that Flanders wants to focus on in this part of the world?

GB: Yes, indeed, we really are investing in innovation and R&D. Life Sciences are one part of that, but there are other parts such as nano-technology and IT. Similar to Lithuania, IT is also very important. We are investing in new industries and new forms of energy. We believe that innovation is the key to the future. It is my feeling that these are the same issues that are on the agenda here, and therefore it is important that there is co-operation. A country or a region cannot be standing alone doing R&D. There has to be an exchange of researchers, young people, students and academics. In that respect the MOU in the area of life sciences is very important. The bio cluster and the VIB (Flemish Institute for Biotechnology) are significant parts of our innovation potential. We see that it is also very important in Lithuania and the Life Science Baltics conference, here in Vilnius in September demonstrates that Lithuania and the region, also have the same focus (on this type of innovation). I think it is of utmost importance that Western European economies have a future, but there is one essential condition, that is that we invest in R&D and innovation. The main industry in Flanders is no longer mechanics, but mechatronics and all these new technologies: nanotechnology and robotics, infinite computing, and machine to machine technology. If we invest in all these new technologies and emerging fields than we have a future for our industry. For all these reasons, it is important to collaborate at multiple levels between academia, centres of excellence, and industry R&D centres to create added value. Therefore, I am very satisfied that we could sign these MOUs. I have also invited the Lithuanian government to visit Flanders with an economic mission, so that we can show our strategic research centres. We like to bring them to the factory of the future where a large number of these new technologies have been implemented. We believe that all of this type of knowledge and expertise can be shared between Flanders and Lithuania.

LT: Are there particular areas within the field of Life Sciences where you see potential synergies between Flanders and Lithuania?

GB: As a government we are facilitators, creating an environment to makes things possible and bring business together. It is up to the enterprises to seize the opportunity and take the risks. It is up to them to go abroad, find and serve partners and sell their products. We cannot predict what is or will be a success and it is often (with new technologies) difficult to predict as it depends on many factors and there are often many variables at work. Sometimes it depends on coincidences or even good fortune.

LT: You have now been a few days in Lithuania, is there anything in particular that you would like to share with our readers?

GB: Yes, indeed. I think believing in the future is most important. This is a region that for a large part of the 20th Century experienced a terrible situation it is clear that people in this country suffered a lot. Now Lithuania is independent and a part of the European Union. There is solidarity in the EU that facilitates investment, such as in the infrastructure of the railway connecting the Baltic countries to the rest of Europe. If the country continuous to investment in education, in research, and facilitating entrepreneurship, then I believe there will be a bright future.