BNS
Firefighters are battling a huge peat fire in Lithuania's western district of Silute on Friday, covering an area of 12 hectares. Firefighting equipment is being sent from across the country. 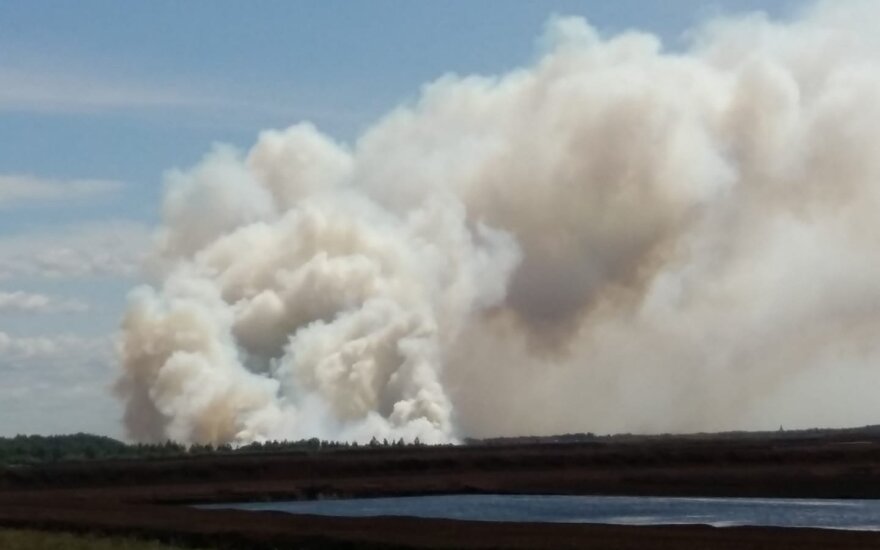 "The situation is very complicated because of strong winds which are not expected to die down tomorrow as well. (…) It will probably take very long to put it out," Laura Valauskiene, a spokeswoman for the Fire and Rescue Department, told BNS Lithuania.

In her words, equipment is being sent from across the country and a helicopter might also be involved.

The report of a peat fire in the village of Sisgyriai was received at 1.13 p.m. Some ten fire-engines have been sent to the scene.

Antanas Klizentis, the elder of Kintai, a town in Silute District, told BNS Lithuania the fire poses no direct threat to local residents as it broke out further from the settlement. But if winds change the direction, heavy smoke would reach nearby villages and the city of Silute.

A huge fire also broke out here in 2011 and destroyed an area of several hundred hectares.

Lithuania is looking for ways to send one of the army's Mi-8 helicopters to assist in the extinguishing of a huge peat fire in Lithuania's western district of Silute. And the country has already reached an agreement with neighboring Latvia on possible assistance if needed, a spokeswoman for the national defense minister, told BNS Lithuania on Friday.

"We are trying to send one of the Mi-8 helicopters, and we don’t know how but we'll probably send it. And if needed, we will ask the Latvians for assistance," Vita Ramanauskaite said, adding that National Defense Minister Raimundas Karoblis discussed such a possibility with representatives of Latvia on Friday.

"If needed, the minister reached an agreement that the Latvians will help," she said.

In her words, one of the Lithuanian army's Dauphin helicopters is monitoring the fire area.

The Lithuanian army has Mi-8 helicopters capable of extinguishing fires but the army's representatives told BNS Lithuania earlier that one of them is undergoing mandatory technical maintenance after 100 flight hours, and the other two are undergoing repairs.

Although the army also has Dauphin helicopters and border guards have Eurocopters, they cannot perform the fire extinguishing function.

Mi-8 helicopters have Bambi Bucket-type water collection equipment which allows collecting over 2,500 liters of water at a time.

57 people drowned in Lithuania in past summer, with alcohol and negligence to blame

57 people drowned in Lithuania this past summer, with the majority of them losing their lives in...

Lithuania's government is calling a meeting of its National Security Commission on Monday over the...