BNS EN
aA
Lack of unity in the European Union's (EU) stance on the United States' move to tighten sanctions for Russia is not a split in the community, however, a sign of stagnation in the organization, which is tying its hands behind its back, says Lithuania's President Dalia Grybauskaitė. 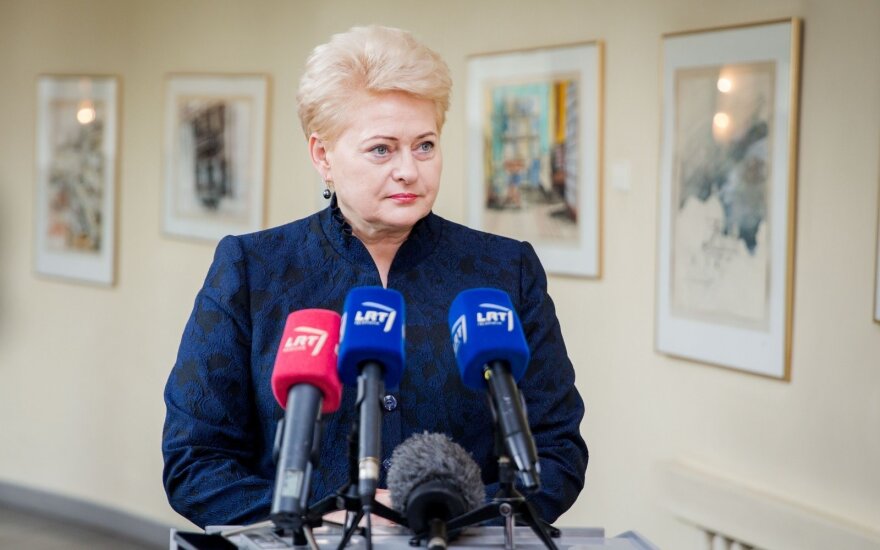 "I would not call this a split (of EU states), I see this rather as a choice of economic development model, as the fact that some Western nations are still tied to pipes when there is already a modern technology – LNG terminals, pipes will be virtually useless in the future, this shows that Europe is still conservative and stagnant in its development," the president told journalists after a meeting of her Baltic counterparts with US Vice-President Mike Pence in Estonia on Monday.

Related articles
K. Girnius. Trump and Lithuania – how we should act
Lithuania's president supports new US sanctions for Russia at Tallinn meeting with Pence

EU nations hold different opinions about the US decision to tighten sanctions against Russia in fears that they may affect joint EU-Russia projects, such as Nord Stream 2. Supporters of the project say it will allow cutting gas prices. German, French and Austrian companies cooperate with Russia's Gazprom in the project.

In a statement published by the President's Office, Grybauskaitė said that Europe was still choosing being tied to gas pipelines, thus holding back its economic potential.

"Meanwhile, we already have LNG, we are no longer dependent on any pipes, we can choose gas from any part of the world at the best prices. Unfortunately, Europe chooses being ties, being dependent have its hands tied behind its back, having its economic potential held back," the Lithuanian president noted.

The tightened US sanctions are aimed at punishing the Kremlin for interference with the 2016 US presidential elections and the annexation of Ukraine's Crimea region. The project envisages sanctions for companies that work with Russian export gas pipelines. Observers say the US may also seek to consolidate its influence in gas exports. The amendments are yet to be signed by US President Donald Trump.

Ukraine, Poland and the Baltic states say that Nord Stream 2 would make the EU more dependent on Russia's gas concern Gazprom, which already covers about a third of Europe's gas needs.

Baltic PMs in Tallinn to settle disputes on energy projects

The prime ministers of Lithuania, Latvia and Estonia are meeting in Tallinn on Monday to work on...

Lithuania's President Dalia Grybauskaitė on Wednesday welcome the plans of the US Congress to...