BNS EN
aA
The leader of the Lithuanian Farmers and Greens Union (LFGU) says that his party's relations with its ruling coalition partner, the Lithuanian Social Democratic Party (LSDP), are good, adding that the position of LSDP Chairman Gintautas Paluckas, who has said that the Social Democrats may consider pulling out of the coalition, differs from that of the party's parliamentarians. 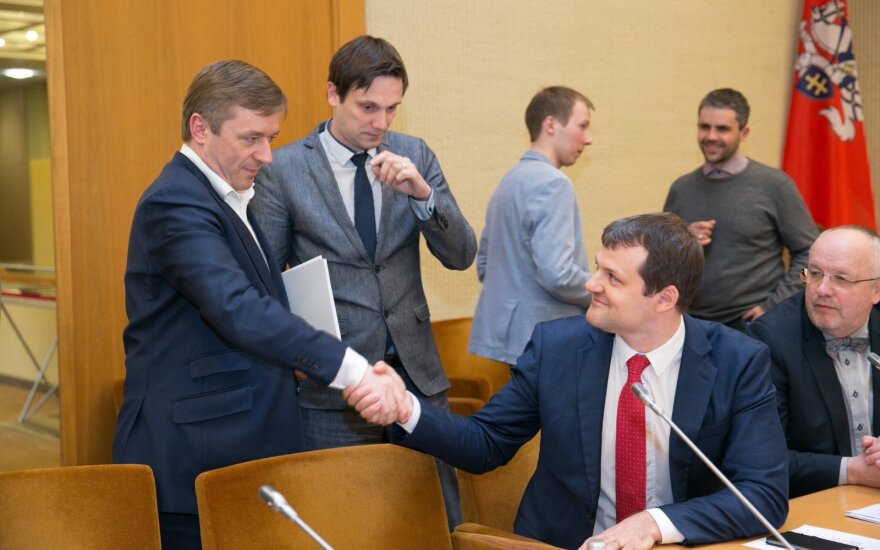 "We are on very good terms with the Social Democrats' political group (in the Seimas). While the party's chairman was making his statements about a possible withdrawal from the coalition, we disused preparations for the (parliament's) fall session with the Social Democratic leadership," Ramūnas Karbauskis told reporters after Wednesday's meeting of the LFGU leadership.

The LFGU leaders met to discuss the party's reaction to the Social Democrats’ discussions about leaving the coalition.

"Our relations are ready good and we are ready to work. I believe that the next session may be even better for our coalition in terms of understanding each other, because we are getting to known each other better. As to what the (Social Democratic) party's chairman thinks and why he thinks differently, I hope that they will discuss and sort it out among themselves," Karbauskis said.

"We are preparing for the fall session, because we have a lot of decisions to adopt, including the budget, which would allow us to state that we are delivering on our promises to voters," he added.

Viktoras Pranckietis, the speaker of the Seimas, said that "the way the Social Democrats' group (in the parliament) speaks is different from that the party's chairman speaks".

"Perhaps the chairman is still in an election mode. We are speaking with the group and they are determined to work", he said.

The LFGU political group has 56 members in the 141-seat parliament and the Social Democrats have 19 seats.