Ludo Segers | the Lithuania Tribune
aA
On Wednesday, the High Representative of the EU for Foreign Affairs and Security Policy, Federica Mogherini, met with US Secretary of State, John Kerry. The two discussed a number of issues during a luncheon meeting, in particular the situation in Ukraine, the recent wave of terrorist violence in France and other EU countries, energy independence, and other security issues. 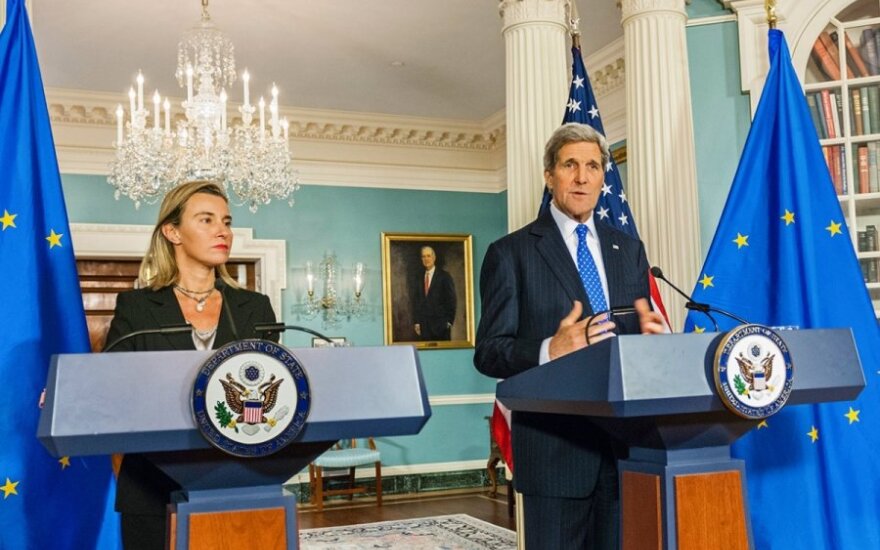 During a press briefing in the Treaty Room at the State Department, Mr. Kerry said that the two reviewed the recent reports about the alarming situation in Ukraine. Mr. Kerry said: “We are continuing to press Russia to live by the Minsk agreements which they negotiated and that is critical to our ability to restore the full sovereignty and the calm and the stability necessary for a transformation (in Ukraine).”

Mr. Kerry expressed his particular concern about Russian-backed separatists making a full-scale attack against the city of Debaltseve in an attempt to gain control of a very significant rail juncture. He said: “It is in blatant violation of the September 19th Minsk agreement ceasefire.” He further remarked that “there has been about a 800-square-kilometre extension of the so-called line of control – an effort to try to broaden the amount of territory that is being held from the time that they signed an agreement - a very blatant land grab that is in direct contravention to the Minsk agreement.”

Mr. Kerry made it very clear that the United States continues to strongly support Ukraine’s territorial integrity, stating: “The OSCE reported yesterday that at least 30 Grad rockets hit Debaltseve, and killed three civilians and wounding 12 people. According to the OSCE observers, those rockets came, specifically, from the separatist-controlled town of Horlivka.” He restated that the US is ready to help Ukraine with the serious economic challenge that it faces.

Referring to the meeting in Brussels about sanctions against Russia on Monday by the EU foreign ministers, Mr. Kerry said: “The European community decided to hold the line with respect to the sanctions and continues sending a message that the EU will not stand for this kind of violation of the sovereign integrity of a nation.”

Questioned by France 24 about her soft stand on sanctions against Russia, Federica Mogherini responded, defensively, her stand on the subject. She said that the EU and the US are united on three basic principles: “support to Ukraine on the reforms process, putting economic pressure on Russia to stay out of the Ukrainian conflict and implement the Minsk agreement” and “the joint political engagement to make a diplomatic channel work in support of President [Petro] Poroshenko’s efforts”. Ms. Mogherini said that meeting these principles would form the basis for any reconsideration of the sanctions from the European Council meeting in March.

High representative Mogherini and Secretary of State Kerry also discussed the mutual commitment to create energy independence for Europe. They addressed the issue of the sole source of supply from Russia passing through Ukraine. Strong plans are in place and acted upon in Europe to create that independence, according to John Kerry.

In addition to Ukraine and energy independence, the two also discussed a host of other issues, Libya, the proposed Transatlantic Trade and Investment Partnership (TTIP), the Israeli-Palestinian dispute, stabilizing Libya and the future of Bosnia. The two will meet again in London on Thursday to review with all partners the situation of ISIS and extremism in Yemen.