BNS
aA
European and US politicians and diplomats, in Vilnius for an international conference, on Wednesday underlined the need for strengthening transatlantic ties in the face of security and economic challenges from Russia and China. 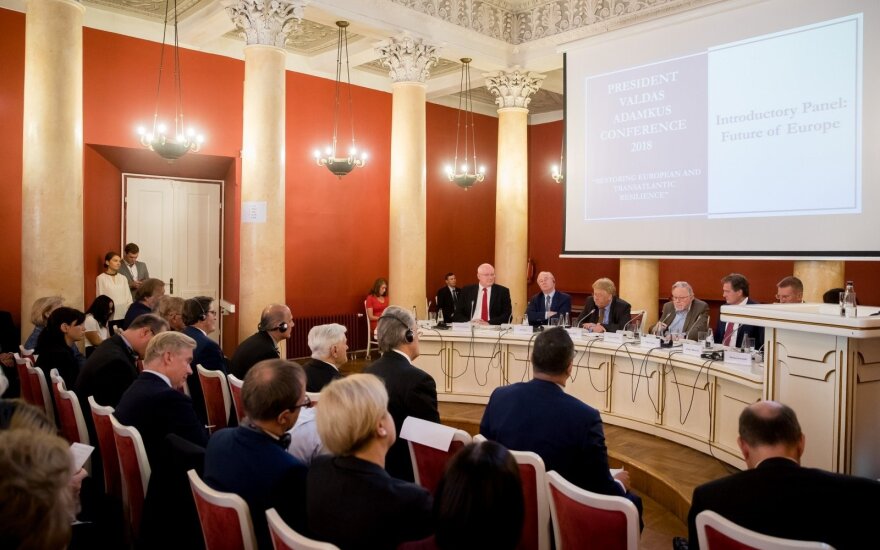 Participants of the conference, hosted by Lithuania's former President Valdas Adamkus, noted that in pursuing these goals, attention should be drawn to Washington's tariffs on EU steel and aluminum imports.

Christian Schmidt, a member of the German parliament's Committee on Foreign Affairs and a former member of the Cabinet, said that NATO's measures to beef up security in Eastern Europe, that is, deploying troops and armaments to the Baltic states and Poland, "can only be the first step".

Related articles
When we buy Russian gas, we buy them arms, Yushchenko says in Vilnius
Europe will not be whole without Ukrainian, Russian people, US rep says in Vilnius

"We have to understand that it's an integrated need of making, preparing for what we do not want to have, but to show to everybody that we are prepared to keep our Europe and our part whole and free," Schmidt said at a news conference in Vilnius.

"Personally, I would not suggest to have dancing festivals with Mr. Putin. It is everybody's own choice. But I would suggest that we sit very intensely within the hot agenda, which has been consented transatlantically together," he said.

Elmar Brok, a member of the European Parliament, said that international challenges are so big today that "it would be unreasonable for Europeans and Americans not to seek cooperation", adding that it is necessary to fight with "the imperialistic, military, economic ideas" of Russia and China.

"It is the European interest that the Americans and Europeans cooperate together. I think Americans are a very strong country, but if you see the challenges overall, I think nothing has changed in the last 40 years", he said at the news conference.

With reference to the steel and aluminum tariffs, the politician said that the EU and the US should "overcome the misunderstandings that we had in last months and to come back to the joint Western strategy both on the economic and security policy level".

Kurt Volker, a former US ambassador to NATO and now Washington's special representative to Ukraine, underlined that the West is united by a shared commitment to freedom, democracy, free market, rule of law and respect for human dignity.

In defense of these values, the US refused to recognize the Soviet annexation of Lithuania in the Welles Declaration back in 1940. US Secretary of State Mike Pompeo in late July 2018 adopted a declaration reaffirming Washington's refusal to recognize Moscow's annexation of Crimea, Volker noted.

"I think it's a very important statement from the Secretary of State, because that makes clear where the US stands on its issues with values," he said.

A speech by Member of the European Parliament Antanas Guoga at the Valdas Adamkus International...