European Defense: Time for a Higher Level of Ambition

Ambassador Alexander Vershbow
aA
President Donald Trump’s address to the UN General Assembly in September 2018 was a fresh reminder of the United States’ abdication of leadership and rejection of “globalism.” On more and more issues – trade, climate change, the International Criminal Court and, most recently, the Iran nuclear deal – the United States is becoming increasingly estranged from its traditional allies and partners. 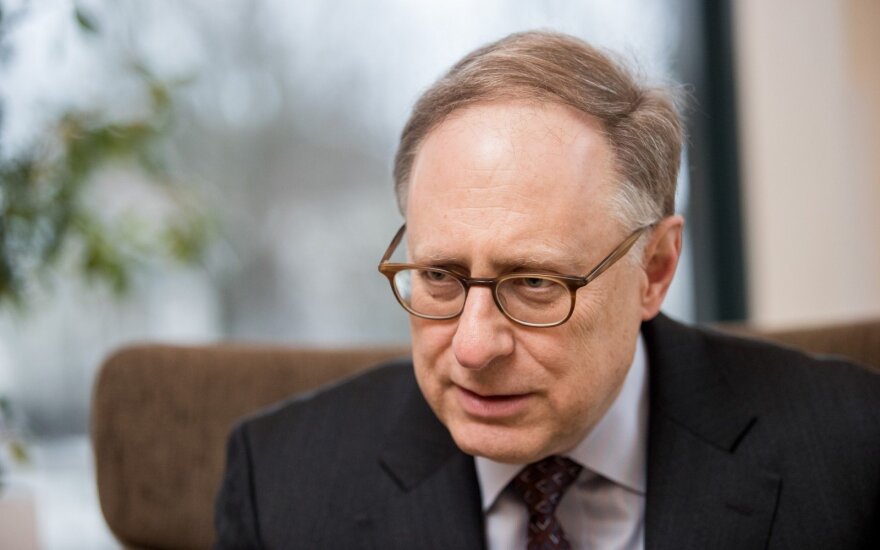 So far, NATO and transatlantic security have managed to survive the President's wrath. Despite Trump's complaints that NATO is "obsolete" and that Allies aren't paying enough for US protection, his Administration has actually increased US military presence in Europe and boosted funding for the European Deterrence Initiative. Thanks in large measure to the leadership of Secretary of Defense James Mattis, the Brussels summit in July 2018 adopted a wide range of decisions to bolster deterrence, increase readiness and expand NATO's role in fighting terrorism and instability along Europe's periphery.

Related articles
Identifying the biggest threats to the country, wanting to both punish and be friends
U.S. Ambassador Anne Hall: 100 years of U.S.-Lithuania Friendship

But the President's tantrums during the summit, and his recent outbursts during the end-of-World War I commemorations in November, suggest that his commitment to the Alliance is tenuous at best and should not be taken for granted. The European members of NATO (as well as Canada) will need to do more to convince this transactional US President to stay engaged with NATO, above and beyond meeting the 2%-of-GDP benchmark for their defense spending. Business as usual will not suffice.

Increased cooperation between NATO and the European Union is one way to show Trump that Europe is pulling its weight. It is encouraging that, in the last 4-5 years, the procedural and theological barriers to interaction between the two organizations have been overcome. Thanks to direct engagement between the NATO Secretary General and top EU leaders, as well as frequent contacts between their staffs, NATO and the EU have adopted a joint playbook to counter hybrid threats, coordinated their maritime operations to curb illegal migration, and adopted a comprehensive program for future strategic partnership.

For the first time, the European Union has agreed to take concrete steps to improve NATO's military readiness by using EU mechanisms to improve military mobility across European borders. This could include European Commission-funded infrastructure projects to enable the rapid movement of NATO forces to the Eastern flank, as well as political initiatives to overcome legal and procedural bottlenecks that could delay critical reinforcements.

For its part, NATO is taking a supportive stance toward the EU's latest initiatives aimed at boosting European capability development, Permanent Structured Cooperation (PESCO) and the European Defense Fund (EDF). Allies have also been supportive of the French-led European Intervention Initiative, which is outside the EU, but could enhance European capacity for crisis response operations in Europe's neighborhood.

This is all good news and I sincerely hope these efforts yield concrete results. But the question is whether, in the age of Donald Trump – when US security commitments to Europe are in doubt – these modest steps are going to be enough.

Time for Europe to be More Ambitious

I would submit that Europe – and I mean both EU members and defense minded non-EU Allies like Norway and post-Brexit UK – must think much more ambitiously about European defense. They need to do this not only for Europe's own sake, but to keep the US engaged in transatlantic security for the long haul.

Donald Trump may be more transactional than conventional American leaders, but US complaints about burden-sharing and domestic pressures to pull back from global commitments will not disappear when Trump departs the scene. Both major US political parties are emphasizing "nation building at home" and the need to address long-neglected problems of infrastructure, education and health care. This may become even more pronounced in the wake of Democratic gains in the recent US mid-term elections.

Moreover, the value of Europe as America's chief military partner is no longer self-evident. Even if European Allies meet the 2% and 20% targets under the NATO defense investment pledge[1], and even if they deliver on all 17 PESCO projects, there is a risk that Europe will fall further behind the United States in military capability and technology, creating a two-tiered Alliance that could jeopardize the transatlantic bond. This is especially the case when it comes to the high-end capabilities needed to deter and defend against Russia's technologically advanced forces – capabilities which, today, are provided disproportionately by the United States.

To reinforce the transatlantic bond, Europe needs to go beyond increasing the EU's capacity for crisis management under the EU Common Security and Defense Policy (CSDP). Allies need to get more serious about boosting Europe's contribution to NATO itself. The goal should be to make NATO a more balanced alliance than has ever been the case in NATO's 70-year history. This is the way to show Donald Trump that NATO is really a "good deal" for the United States.

To this end, European allies need to start talking again about a stronger European pillar within the Alliance as the goal of European defense, rather than placing the accent on "strategic autonomy" for the European Union.

Why broaden the focus of European defense beyond CSDP? The fact of the matter is that, with Brexit, CSDP missions may become less likely, not more. Without UK forces, the military capacity of the EU is going to diminish significantly, by about 20%. Conversely, 80% of NATO's total military capability will be provided by non-EU allies. In addition to a decline in the EU's capacity for CSDP missions, European publics' preoccupation with internal challenges and the growing isolationism of populist leaders could reduce the EU's appetite for expeditionary missions beyond Europe's immediate neighborhood.

While CSDP may still be a viable option for small-scale peacekeeping or training missions in North Africa, most of the current CSDP missions are still dependent on the United States for key enablers like airlift, air-to-air refueling, and intelligence, surveillance and reconnaissance. Without greater European capacity in these areas, talk of "strategic autonomy" is premature, if not disingenuous, and the burden-sharing benefits for the United States are less than meets the eye.

Rather than focusing on strategic autonomy, the EU and all of the European allies should focus on greater self-sufficiency. As emphasized earlier, the focus should go beyond capabilities for crisis response operations to include the more robust, technologically advanced capabilities and enablers required for collective defense and deterrence vis-à-vis Russia. The European Union could take concrete steps to encourage EU Allies (and close partners like Sweden and Finland) to move in this direction, building on the example of the EU project on military mobility.

For example, the EU could make it a legally binding requirement for member states to meet the NATO 2% and 20% goals. A new, more robust series of PESCO projects could be adopted to encourage multinational collaboration on high-end capabilities. The EU could agree to fully align PESCO and EDF-funded projects with the capability priorities set by the NATO Defense Planning Process. This could be accompanied by a commitment to ensure that PESCO and EDF projects are open to participation by non-EU allies (including Turkey).

In some areas, the European members of NATO (plus Canada) could commit to provide 50% of NATO's requirements for key capabilities like combat aviation, airlift, aerial refueling, reconnaissance drones, and air and missile defense – areas where the Alliance is now overly dependent on the United States. Right now the "50% rule" is only an aspirational goal within NATO, not a binding requirement.

Reaching 50% might take a decade or more to achieve, and it could require additional resources. A place to start would be the implementation of NATO's new Readiness Initiative – the "four 30s." Specifically, European Allies could agree to provide half of the 30 ground battalions, air squadrons and naval combatant ships that must be manned, trained and ready to move in 30 days or less.

Aiming for Europe to provide 50% of key capabilities would be a more equitable and politically sustainable basis for keeping the US engaged over the long term, well after Donald Trump is gone. A stronger European defense pillar within NATO would also give the European allies greater political weight in Alliance decision-making. And it would mean that Europeans would finally have the full range of capabilities that they now lack to make strategic autonomy more than an empty slogan.

Looking beyond the military sphere, the EU and the US also need to forge a more balanced partnership in other domains, such as: supporting Ukraine's and Georgia's independence and their resilience against Russian hybrid aggression; completing the Euro-Atlantic integration of the Western Balkans; and helping Europe's Middle Eastern and North African neighbors to fight terrorism and curb illegal migration. As would be the case with respect to defense capabilities, a Europe that can truly share political leadership and responsibility with the United States is the best way to convince the US to uphold its traditional role in Euro-Atlantic security.

In short, a more balanced Alliance would be good for NATO, good for the EU, and good for the transatlantic bond. Europe, the ball is in your court!

Alexander Vershbow is a Distinguished Fellow at the Brent Scowcroft Center on Strategy and Security of the Atlantic Council in Washington DC. He served as NATO Deputy Secretary General (2012-2016), and previously as US Assistant Secretary of Defense for International Security Affairs and US Ambassador to NATO, Russia and the Republic of Korea.

The article was published in the most recent edition of Lithuanian Foreign Policy Review, an annual magazine by Eastern Europe studies center in Vilnius, Lithuania. Access to the full publication - http://www.eesc.lt/uploads/Lithuanian%20Foreign%20Policy%20Review%202018.pdf

[1] At the 2014 Wales Summit, Allied leaders pledged to move toward spending 2% of GDP on defense by 2024, and at least 20% of their defense budgets on new equipment and technology.