(1)
BNS
aA
Lithuania's President Dalia Grybauskaitė, who is attending the European Union's (EU) Eastern Partnership summit in Riga, says that the promises made to Eastern partners are sufficient, although the West has not committed itself to accepting them into the EU in the future. 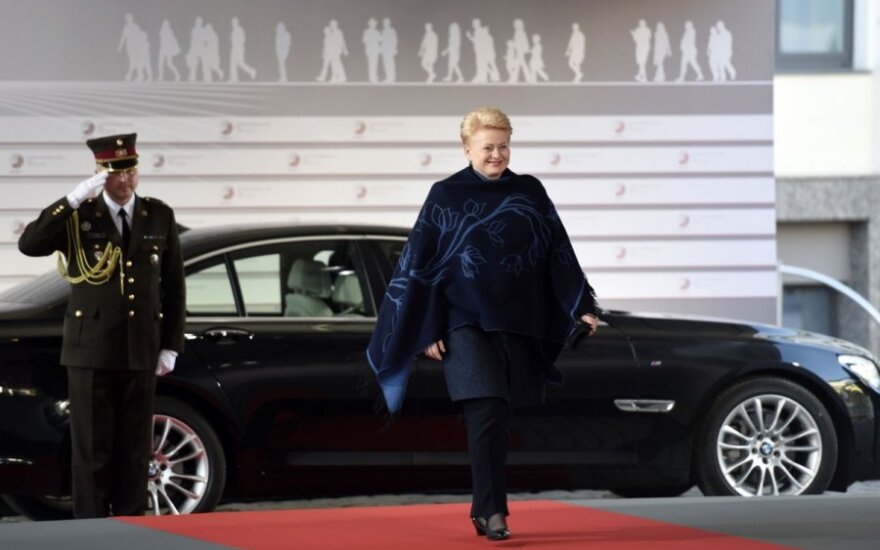 "I believe that a perspective is sufficient, as the process takes a long time. Pledging what will happen in maybe five or ten years, nobody knows this and there should be no guesswork," Grybauskaitė told journalists in the Latvian capital on Friday.

"All the countries that want to become European will become that. Everything depends on nations' will and governments' determination to pursue reforms, seek democratic and law-enforcement reforms, ensure human rights. If the countries do the homework like we did, they will always be welcome, as Europe is open," she added.

Moldova, Georgia and Ukraine are the most active aspirants for closer ties with the EU, while Armenia and Belarus participate in the Russia-led Eurasian Union project, and Azerbaijan wants a special status.

In Grybauskaitė's words, such differences are part of natural evolution.

"Differences have already appeared among the six Eastern partners, naturally, times have changed, and the decisions have changed during the two years after the Vilnius summit. We have two countries that are members of the Customs Union, which means that the Eastern Partnership will continue as a program and platform of communication with Europe, however, the processes, the pace and the quality will change with the counties in the Customs Union, the momentum will be entirely different with the countries that seek to become closer and that want association and future membership," said the Lithuanian president.

In the run-up to the Riga summit, Lithuania and other supporters of the Eastern Partnership wanted the summit's final declaration to clearly stipulate the perspective of EU membership, however, the move was objected by the largest nations of Western Europe.

Visa-free travels with the 28-member EU may become a potential impetus for Eastern Partnership countries. Moldova concluded the treaty back in 2014, with Georgia and Ukraine yet to ensure this.