the Lithuania Tribune, LRT
aA
European Union leaders are running behind events on the ground in their attempts to find solutions to the ongoing refugee crisis, said Lithuanian President Dalia Grybauskaitė who is attending a European Council meeting in Brussels. 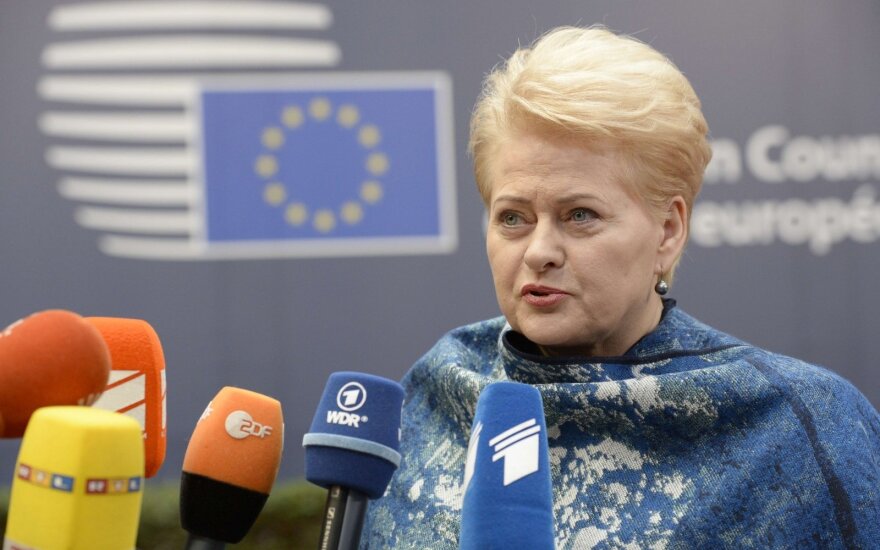 "The problem is that we are essentially running behind developments. We agree on measures, but the situation changes very fast," Grybauskaitė told LRT on Friday.

The European Council meeting is discussing Great Britain's demands for EU reforms and Grybauskaitė said that European and British leaders are nearing agreement on cutting benefits for EU migrants in the UK.

"Agreement is close on the issue that we, Lithuania, the Baltic States and new EU members, care about, the benefits. Many of our central demands have been taken into account - non-discrimination against our people, making sure that benefits are suspended for a limited period of time and only for new arrivals," Grybauskaitė told LRT.

She added that agreement on Britain's other reform demands is in sight, but might not be finalized on Friday. EU leaders are seeking to avoid giving a veto right to any one country, including Great Britain, on important eurozone decisions.

On the refugee crisis, she criticized Austria's recent decision to limit the number of migrants admitted to its territory to 3,200 per day and asylum applications to 80.

"This can start a snow-ball effect, leading to other countries introducing not just border controls, but restrictions of movement across their territories. This means that, instead of seeking common European solutions, we are complicating the situation even further inside Europe. That's what we were talking about," Grybauskaitė said about the Brussels discussions.

Many European decisions are rendered inadequate by the speed of developments on the ground, she said.

"These joint decisions on protecting external borders, on using NATO in the Aegean See and other measures that we were discussing yesterday - they are now starting to seem old news. We are running behind developments which are faster than the decisions and especially their implementation," according to Grybauskaitė.

Last year, over one million migrants reached Europe by sea, 3,771 are missing or dead. Lithuania has committed to resettling 1,105 refugees over two years. A family of four from Iraq arrived in Lithuania last December. About 10 more refugees from Syria and Iraq are expected to arrive in March.

European Union and British negotiators have reached agreement on most of Britain's demand for...

Lithuanians in Britain more concerned about Brexit than benefit cuts

The Lithuanian community in Great Britain have more concerns about the possibility of the country...

European Union countries must look for compromise and help the British government convince the...