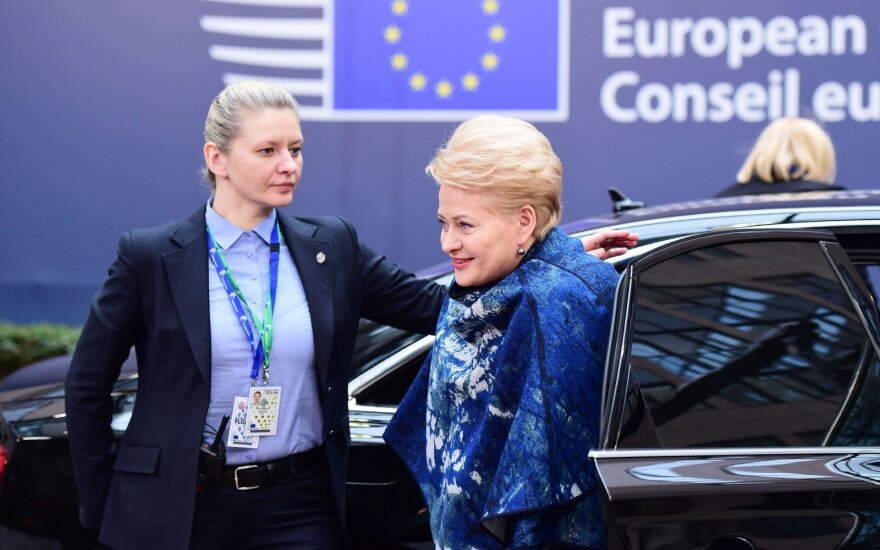 "Decreasing the flows on the path via Turkey and Greece will probably make us realize that we have increased the risk of them using other routes, as well," Grybauskaitė said in Brussels in a statement that was circulated by her press service.

In her words, the preliminary pact to be approved during the European Council meeting is highly complicated, but is in line with Lithuania's interests.

"Unfortunately, the agreement is very complicated, it will be difficult to address fast, as both Greece and Turkey will need to revise their national laws, ensure the Geneva convention and human rights," said the Lithuanian president.

She added that the document was in line with the interests of Lithuania, as the country was willing to provide financial aid to Turkey and Greece rather than boost the number of refugees and economic migrants in Europe: "It is cheaper to help the countries next to the crisis zone."

The EU and Turkey intend to agree that the new migrants coming to Greece should be sent back to Turkey. For every Syrian migrant returned to Turkey, the EU should host one person from the country's refugee camps.

Over 1.2 million people arrived in Europe last year, sparking the biggest refugee crisis in Europe since WWII. The EU last year worked out a scheme for thousands of refugees to be distributed across the community, however merely a few hundred have been resettled of the planned 160,000.

Up until now, the migrants mainly used the refugee route to Western and Northern Europe from Greece via the Balkan countries. After nearly all of them resumed border control, Lithuanian border guards warn that the other alternative migration route may lead via Lithuania.

Lebanon, the forgotten angle in the refugee crisis

Imagine for a moment that almost half of the population of Vilnius was Ukrainian refugees fleeing the...

Europe must, at least temporarily, close its doors to economic migrants according to Lithuanian...

As part of the European Union 's attempt to help solve the migrant and refugee crisis , Lithuania...