Energy minister's position on the line after reappointment of controversial deputy

BNS
aA
Renata Cytacka, a member of the Electoral Action of Poles in Lithuania, has been re-appointed as deputy energy minister. 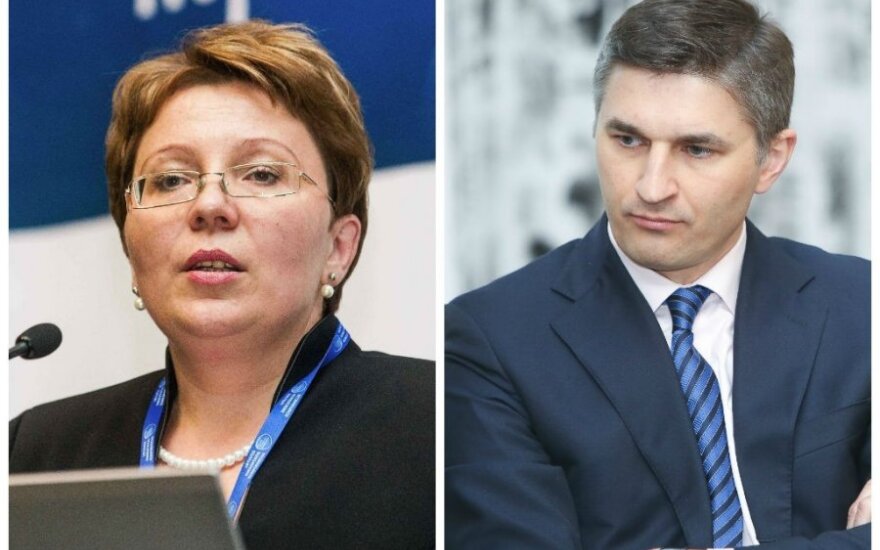 Cytacka and Aleksandras Spruogis, a member of the Lithuanian Social Democratic Party, on Monday took up their posts as deputy energy ministers, the Energy Ministry said.

Both of them held the posts until mid-July, when all deputy ministers resigned en masse before the government returned its credentials to the newly reelected president.

The ministry said that it had received no negative information about the vice-ministers in response to its inquires to relevant institutions.

The ministry is still waiting for a response to its inquiries about a third vice-minister who has been nominated by the Labour Party.

Cytacka was the only vice-minister who did not resign by 11 July, defying an agreement signed by the ruling coalition parties. Energy Minister Jaroslav Neverovič accepted her resignation in mid-July.

Prime Minister Algirdas Butkevičius has reproached Neverovič over Cytacka's behavior on more than one occasion.

The vice-minister made the headlines when she called President Dalia Grybauskaitė "a liar" in public and when she did not raise the Lithuanian flag outside her house in the district of Šalčininkai on two Lithuanian public holidays in a row, but raised the Polish flag on the occasion of a public holiday in the neighbouring country.

Cytacka, who was responsible for renewable energy and heating sector development and energy efficiency policies, started her work at the Energy Ministry in December 2012.

Prime Minister Butkevičius told reporters after the Cabinet's meeting that he would submit the proposal to the president to dismiss Neverovič on Tuesday.

"He (Neverovič) informed me that the leader of the Electoral Action of Poles continues to press for Ms. Cytacka's re-appointment as vice-minister. It was said very clearly that there was the political council's decision that all candidates for vice-ministers had to be approved by me. He did not have my approval and he was told very clearly on Thursday that if he re-appointed her as vice-minister, I would recommend that the president remove him from the Cabinet," the prime minister said.

"I will submit that recommendation to the president tomorrow," he added.

Modestas Naudžius, a spokesman for the president, told BNS that Grybauskaitė would decide whether to dismiss Neverovič from his office after receiving the prime minister's recommendation.

Neverovič is on vacation from 18 through 24 August.

Butkevičius said that the ruling coalition's political council would decide whether the EAPL would remain in the coalition.

Lithuania's Prime Minister Algirdas Butkevičius says he will not give in to the pressure of MEP...

Prime Minister Algirdas Butkevičius says that the participation of the Electoral Action of Poles in...

Renata Cytacka, delegated by the Electoral Action of Poles in Lithuania, who resigned as deputy energy...

Lithuania’s Energy Minister Jaroslav Neverovič has signed an order accepting the resignation of...