aA
Representatives from the Lithuanian Social Democrat Party (LSDP) and Lithuanian Peasant and Greens Union (LVŽS) met in a Delfi electoral debate in an exchange of opinions. LVŽS Chairman Ramūnas Karbauskis spoke for his party, while the LSDP was represented by deputy party Chairman and Seimas deputy Chairman Algirdas Sysas. Key focus in the exchange were artificial insemination, the writing of last names in original language in identification documents and matters of partnership. 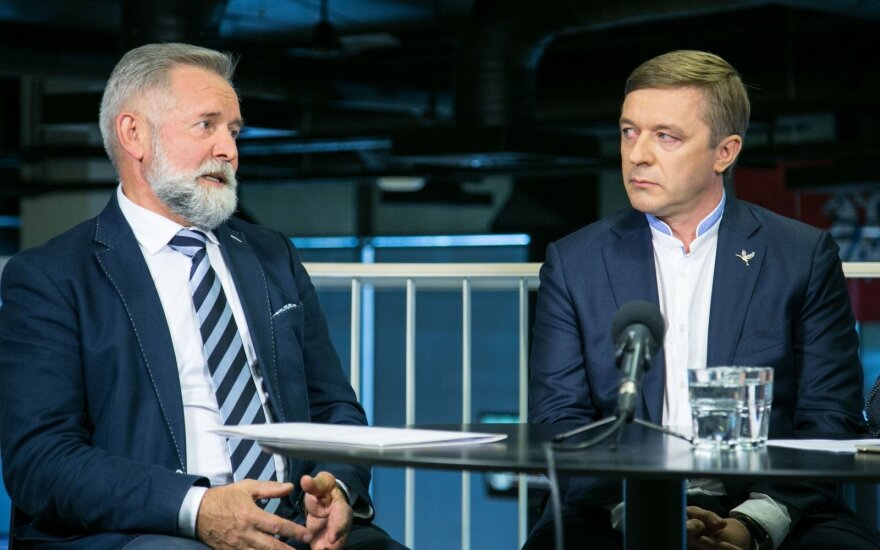 Karbauskis was critical of the Seimas ruling to allow artificial insemination, noting that there are other less invasive, but nonetheless effective options that could be employed and that the Seimas didn’t adequately examine the matter. He stressed the possibility of sanatorial treatment, particularly the way it is done in Poland and noted that the price of artificial insemination is significantly higher. “We are left with a question. What will be done with unused embryos?” the LVŽS Chairman concluded, during DELFI TV debates.

Related articles
ELECTIONS: Who will be the next Seimas Speaker?
ELECTIONS 2016 Economics. Kojala: the DP’s metaphors fell out of context

Sysas, speaking for the LSDP was far more optimistic on the ruling, noting that up to 50,000 families are in a position of having difficulties with conception in Lithuania and this ruling, a conclusion of decades of debate, gives such families hope. He stressed that most European states have this method legalised and in use, nothing that earlier families would just go abroad and pay for the service there.

The LVŽS was also unconvinced by the potential to write last names in the original language on personal documents, instead suggesting a compromise of allowing the original spelling in the second page of the passport. The LSDP stance is rather different, with Sysas expressing regret at failure to solve the issue during this coalition’s term, citing disagreement between coalition parties as the key problem. He noted that there could be difficulties in judicial proceedings if there were two different spellings of an individual’s name on their documents. Sysas concluded that “I believe that one’s name is individual property,” expressing support for foreign spelling and lettering in documents.

Karbauskis also spoke against some of the current proposals on partnership, expressing concern that they are constructed in a way that would force decisions on homosexual families. He expressed belief that the matter of partnership should left to the civil code and not built into a separate code, as codification of partnership between man and woman would lead to inevitable lawsuits forcing the Lithuanian government to adopt homosexual partnership. A. Sysas’ stance was more liberal, seeing no issue with homosexual partnership, stating that “It is a matter between consenting adults.”

Karbauskis also revealed some of his party’s objectives in the upcoming election, expressing interest in party members taking the posts of Minister of Culture and Minister of Education and Science. He also noted that the party has not begun coalition talks yet, but expects his party to play an important role in the new Seimas.