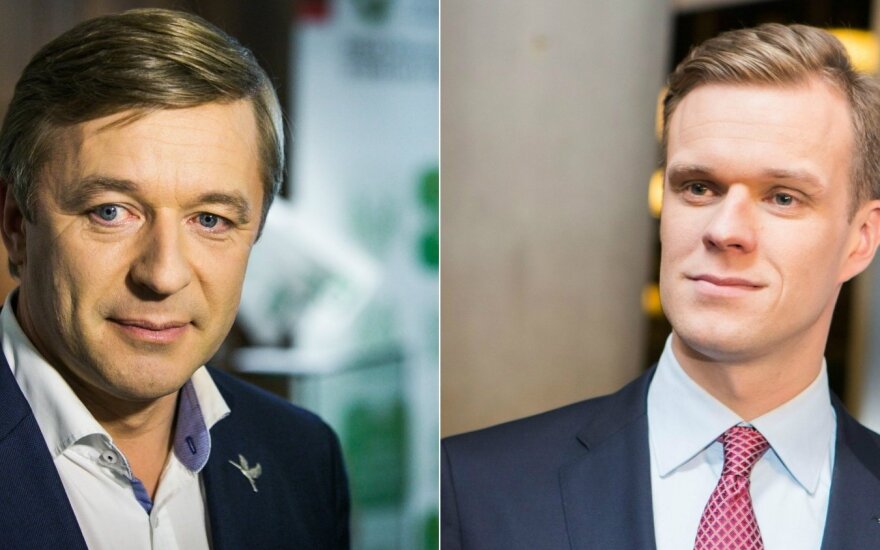 During their elections campaigns both the Conservatives (TS-LKD) and the “Peasants” (LVŽS) stressed the need for education and social reform. How the reform should be done, however, particularly education, is where their opinions split.

For the entirety of the previous Seimas term, “Peasant” representative Rima Baškienė worked in the Seimas Education, Science and Culture Committee. She believes that there is a need for another review of the student baskets, both for schools and universities, while also increasing funding for the education system to 6% of the GDP from 4.2%.

Related articles
ELECTIONS. Reflecting on an LSDP – 'Peasants' partnership
ELECTIONS. Who will win the 2nd round and form the coalition government?

Meanwhile one of the Conservative candidates for Minister of Education and Science, member of Seimas Mantas Adomėnas stresses that first of all it is necessary to raise the prestige of the teacher profession by raising wages and improving their training. Regarding higher education, the Conservative focused on the need to begin a university reform based on combining universities.
A minister from a condemned university?

R. Baškienė stressed that the “Peasant” take on education reform will be prepared by professionals. One of the party’s candidates for Minister of Education and Science is the dean of the Lithuanian Educology University (LEU) History faculty Eugenijus Jovaiša. Based on M. Adomėnas’ vision for higher education reform, this institution would find itself disbanded.

“There are definitely too many universities. Three universities should remain, while ensuring necessary specialties are not lost. Administrations and specialties that overlap should be unified. This way a critical mass of scientists would be placed in universities, which would allow to develop larger scale scientific project,” spoke Adomėnas. When asked which universities could be up for disbanding, the Conservative was unwilling to comment, apparently in order to avoid offending those placed on the lsit.

“University unification is a long term process which will take not a year and not two. If the unified universities begin normal operation by the end of the new Seimas term, it would be excellent,” mused Adomėnas, mentioning that the LEU should no longer exist, instead pedagogues should be prepared in other, far stronger universities.

Such reform, believes Jovaiša, should help raise the wages of lecturers in higher education. This averages at only €619, while officials in the Finance Ministry earn an average of over €1900 and their counterparts in the Ministry of Education and Science – around €1600.

The “Peasant” representative is also convinced that it is necessary to once again reform that system for final school examinations, despite a myriad of attempts to fix it.

Not actually that many universities

On the idea of unifying universities, Jovaiša observed, that the number is not actually as large, as publically declared, stating that “Supposedly there are 40 or 44 universities in Lithuania. In fact there are 14 state universities and 10 state colleges. But that is not the important part. It is important that our higher education is two stage. The goals of college higher education are one, while those of university higher education are another. But when colleges were allowed to prepare bachelors, confusion ensued. When the system is sorted out, designating who has to prepare bachelors, it will become clear that Lithuania does not actually have that many universities.”

E. Jovaiša noted that only two Lithuanian universities qualify to identify themselves as true academic universities – Vilnius University and Vytautas Magnus University (VDU). All other universities arose from specialised institutes after independence: LEU from the Vilnius Pedagogical Institute, Kaunas Technology University – from the Polytechnics Institute and so on. All Lithuanian spiritual seminaries also joined the list of universities.

“But we definitely need those specialised institutes turned universities. We cannot do without medics, artists and teachers,” says E. Jovaiša.

He views the LEU and VDU merger positively. Jovaiša believes that pedagogical training should be a state concern, something that has absolutely not been the case as of late.

Moving colleges into the province

“Currently vocational educations are equivalent to a profanity in Lithuania. But often those finishing bachelors studies end up working in some sort of narrowly specialised companies. This should not be the case,” the politician said.

Both parties intent on remedying the Labour Code

Both parties agree that it was necessary to uphold the President Dalia Grybauskaitė’s veto on the Labour Code and are prepared to amend the document.

Both the Conservatives and the “Peasants” are prepared to firstly amend the Labour Code in a way that would ensure the employee is returned the status of the weaker party in labour relations.
Speaking on social reform, one of the potential Conservative candidates for Minister of Social Security and Labour, member of Seimas Liutauras Kazlavickas stated that it is crucial to conclude the reform of Sodra [state social security company] as soon as possible. First of all – to get the state debt off its “shoulders”.

The Conservative is also convinced that one of the priority tasks to do is to pass the Basic Children’s Rights Act.

“It is crucial to provide as much as possible attention to families, creating favourable conditions for children to grow up in them. Thus families should be provided professional social, psychological and educational assistance,” said Kazlavickas.

The “Peasant” representative Dovilė Šakalienė agrees on this, however recalling her experience in the working group behind the new Basic Children’s Rights Act, she expressed regret that this terms Seimas has made over 500 amendments to it, ruining it beyond recognition.

“I am convinced that this law should be passed on to the Seimas Human Rights Committee which I am very interested in leading. Firstly we would have to agree that professionals have to help asocial or increased risk families. Experience from the West shows that assistance from NGO’s could help them change. It is important to work in the regions, where there is a lack of qualified specialists. Furthermore temporary childcare, when social workers work with families, cannot exceed a year, as is in Lithuania now. Sometimes temporary childcare in orphanages can last up to even five years,” spoke Šakalienė.

“I am against legalising partnership and believe that both a lone mother and lone father can be identified as a family. But let us leave this issue to party leaders,” cautioned D. Šakalienė.