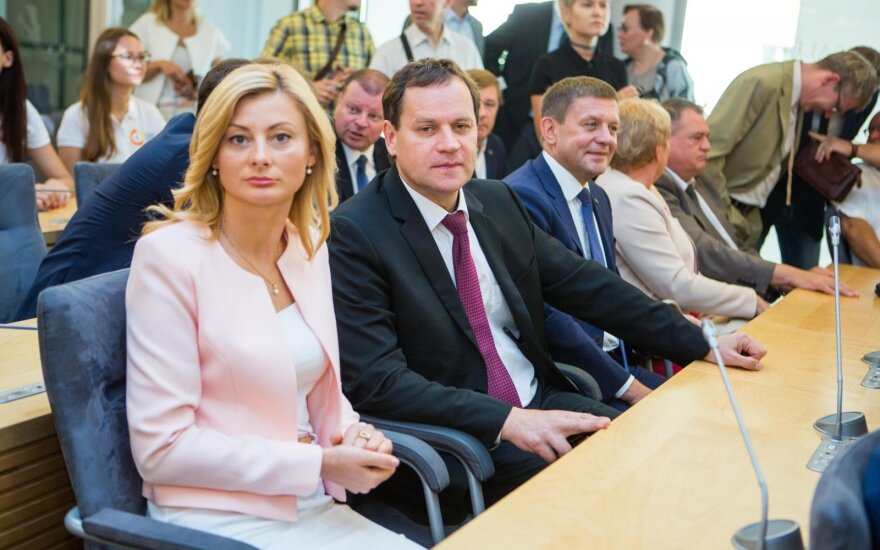 Experts have observed that the Lithuanian People’s Party and the Electoral Action of Poles in Lithuania-Christian Families’ Union (LLRA-KŠS) electoral programmes discuss the same things, just in different wording. Furthermore they have noted that the two parties simply opted to mimic the programmes of other radical parties in Europe, sometimes word for word, LRT.lt reported.

In their programme the People’s Party emphasize a number of supposed issues brought about by Lithuania’s entry into the EU. “The People’s Party mentions not only the adoption of the euro, but also has a whole list of how we’ve suffered from entering the EU. Several times they describe Lithuania as a municipality devoid of its own currency, tariffs and capacity to create public sector jobs, increasing state debt, even if we seem to actually have such opportunities,” observed DNB bank Chief Economist for the Baltic States Jekaterina Rojaka.

Analyst Ramūnas Bogdanas echoes Rojaka’s sentiments, further noting that wanting to not be part of the EU, it would be necessary to not only have a more powerful economy, but also be placed somewhere else geographically; Rojaka observes this as well, noting that Lithuania is sandwiched between two major powers and has to adapt to the prevailing political climate.

Vilnius University professor Ainė Ramonaitė believes that the party is seeking to win the vote of those dissatisfied with the adoption of the euro and the resulting rise in prices through such rhetoric. She, however, stresses that it is important to have a broader perspective on the matter – Lithuania has gained far more than it has lost economically. Ramonaitė muses that betting on such a line of rhetoric may not be a well thought out move as Lithuania remains one of the most pro-European, most optimistic about the EU country.

The LLRA-KŠS also take an anti-EU and anti-euro stance, albeit focusing more on the currency as a measure of national identity and stress how Poland is able to get by just fine without the unified currency. Ramūnas Bagdonas rejects such claims, stating that identity and the litas are a very different set of concepts, with the litas simply being an economic category, something stated by the man behind the creation of the litas in the inter-war era. Furthermore Bagdonas points out that using the same standards as for Poland is not viable in this case as the dynamics of the much larger economy allow it to maintain its own national currency.

While regarding education the parties have somewhat different points of view, they also warrant examination. A. Ramonaitė observes that the LLRA-KŠS focus on the need to maintain access to schools in rural areas and keep rural schools operating, but without substantiation as to how they would ensure educational quality and accessibility. Based on current finances, it is simply not viable to make educational facilities available separately for every village. Meanwhile the Chairman of the People’s Party Rolandas Paulauskas has stated that education is actually too accessible in Lithuania and urged to focus on developing more practical vocational education, such as welders or blacksmiths. Ramonaitė notes that such a view is somewhat misguided as higher education provides more than just professional skills, it also provides the necessary flexibility and awareness that is needed to flourish in a contemporary labour market.

Both parties notably urged disarmament and isolation, with one party envisioning a Lithuanian fortress, another envisioning a Polish one, each of course focusing on their own electorates. As they claim that Lithuania is surrounded by various evils, they focus on a need to surround Lithuania with a wall of tariffs, borders and currency, furthermore banning non-Christian faiths observes R. Bogdanas. While both parties’ stances would leave Lithuania exposed to potential Russian aggression, he particularly notes that the People’s Party positions are specifically a poorly masked pro-Kremlin position.

“It is apparent that many parts of their programmes, both for LLRA-KŠS and for the People’s Party, are simply copied from, for example, the Polish Law and Justice party, as well as some from Hungary. They have copied specifically from parties that rose with slogans such as “against emigrants” or “against European politics”. Such parties are particularly useful for Russia,” A. Ramonaitė highlighted, noting that both parties adhere to this stance, which is rather common among radical rightist parties across the West. She muses that the two Lithuanian parties seek to emulate the success of such parties in Poland and Hungary, sometimes copying programme points word for word.