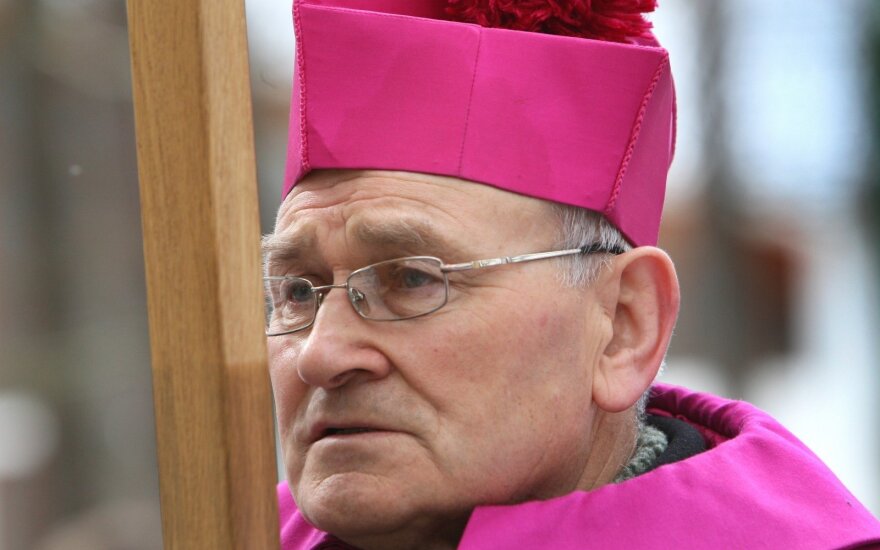 Panevėžys' Bishop Emeritus Jonas Kauneckas has accused the Homeland Union – Lithuanian Christian Democrat (TS-LKD) leader Gabrielius Landsbergis of hypocrisy. According to the bishop, the latest statements by the chairman do not reflect the moral principles of Christianity, despite him declaring himself a friend of the Church and him being expected to represent the interests of believers.

G. Landsbergis himself responds that the Church is more than just one or two questions for him. Furthermore he denies the accusations of hypocrisy, instead stressing that he would have been a hypocrite if he had lied to himself.

Criticisms to the leader of the Conservatives

“It is not he who fights against a truth that is its greatest foe, but he who preaches the truth, but does not live by it,” – Julius Rupp, such is an inscription on a monument next to the Karaliaučius [current Kaliningrad] cathedral. So how should we think of those who call themselves friends of the Church, but are inclined to recognise immoral partnerships?” the bishop wrote on his Facebook.
On an inquiry by Delfi, whether this was directed toward the Conservative leader Gabrielius Landsbergis, Kauneckas confirmed it to be the case.

At the beginning of September, a discussion at “Loftas” by the youth organisation initiative “Žinau, ką renku” [I know what I elect] was highlighted by responses to a question on whether homosexual marriages and adoption should be legalised.

The most surprising response for most was that of G. Landsbergis. So far the TS-LKD has been vehemently against such initiatives and even initiated and supported a number of laws that were seen as homophobic. Meanwhile the new party leader expressed support for homosexual partnership and hopes the Seimas will resolve the issue.

“As a real Conservative, on receiving such a question, I should probably stand up and leave, it should be terrible. No, I am in support of partnership, I believe that the time has come and hope that the new Seimas or our coalition will finally bring this question to Seimas and pass it,” spoke Landsbergis.

That said, immediately after, at a Conservative board meeting, Landsbergis’ deputy Irena Degutienė assured that support for homosexual partnership is only Landsbergis’ own stance and not that of the party.

Not only failing to keep to it himself, but leading others astray as well

“After all if they are claiming to be Conservatives, then it is terrifying that they are veering toward Liberalism. They are not Liberals after all. I would not be surprised by Liberals stating so, but unfortunately Landsbergis declares himself a Conservative. Even more so that they have the Christian Democrats attached to them, they will always speak against any living outside of marriage. And to officially recognise it is perhaps a misunderstanding,” Kauneckas made no effort to hide his frustration, expressing disappointment in Landsbergis and his supposed bringing others astray as well.

“A part of the so-called Conservatives did not vote for defining the concept of a family, that it is a union between a man and a woman, of course children can be included as well. Another case is the discussion on artificial insemination. I am a bishop after all, we can vote for those who operate under provisions grounded in moral norms,” he explained. The bishop also mused on the potential for the party to split, with a portion of the TS-LKD still adhering to Christian dogma.

Assures he intends to stay true to himself

“As far as I have interacted with (in close company) people who hold themselves to be believers, I sometimes want to reflect, faith is much more than just one question. It would be a sad time, if the Church spoke only one thing; individuals have the right to come to terms with anything. We can protect a family in perhaps thousands of different ways. For example by helping young families obtain a home, the help them feel happier, to provide assistance both to them and their children. If those living in Lithuania can make an agreement and establish it as living together, I do not believe that this breaches the sanctity of the Church and the values it defends in any way,” G. Landsbergis told Delfi.

He also firmly denied any suspicions of hypocrisy, repeating that it is his personal position.
“I was being fair toward myself and my conscience by stating my opinion the way it is and not drawing back, as happens often in our politics, when a negative reaction is observed. No, I believe so,” assured Landsbergis.

Talks of a party split denied
When asked whether the bishop’s notions could encourage the Christian Democrat wing to break away, G. Landsbergis assured that currently there are no such ideas in the party.

“I hope that people are intelligent. And it is my invitation to party members to remain democratic. Conservatism and Christian Democracy are not matters of just a single question. I hold myself more of a representative of the former, but by joining in the Christian Democrats we discovered many new colours. For example social sensitivity, aspects of regional politics, a struggle against poverty and such. To bring such a wide spectrum into one question, I apologise, but it is slightly funny,” stated the politician.

He explained that this is the first time he receives criticism from high profile Christian leaders for his statements or activities.

“I sincerely hope that the bishop will find time to discuss this and will allow me to present my position, expand his opinion on this a little because I do not feel alone in it. One of my relatives, it so happens, also thinks the same way, which was unexpected,” G. Landsbergis urged to widen perspectives.