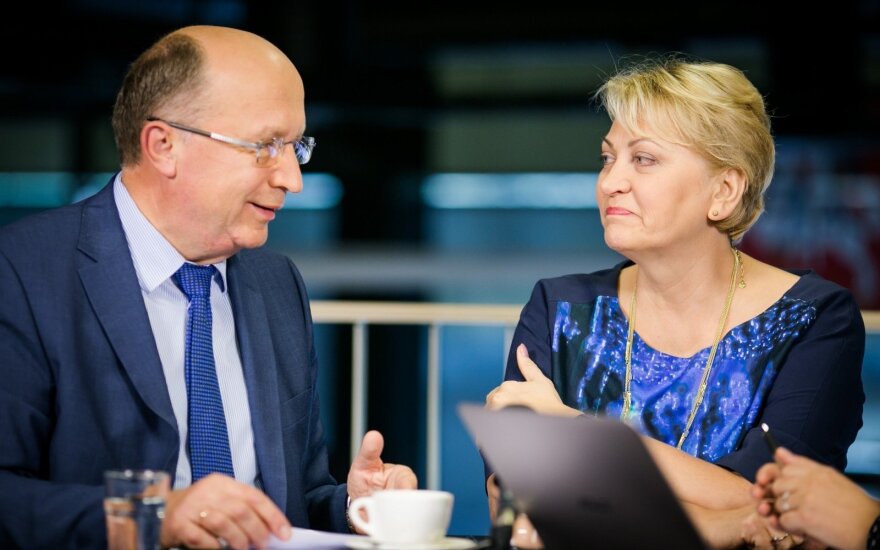 Both the coalition government and the opposition parties agree that too little tax revenue is collected in Lithuania and also that there is a need to reduce labour and property taxation. The means to do this, however, remain unclear in speeches by politicians. Former PM and potential Conservative candidate for the post of Minister of Finance Andrius Kubilius and current Minister of Finance Rasa Budbergytė participated in a Delfi debate discussing potential taxation changes.

The 2008-2012 cabinet led by Kubilius raised VAT from 18% to 21%, when asked what he would do regarding the tax if he were forming a new coalition, the former PM responded that currently he would make no changes to the VAT, including not creating any VAT exemptions as they are of little use to either consumers or producers. Kubilius pointed to a “big reserve” in regards to VAT collections, expressing belief that there is much of this tax that is simply not collected and that there are lessons Lithuania could learn from neighbouring Latvia regarding this, albeit not specifying what exactly.

Related articles
'No new taxes in the near future' - new Finance Minister  (1)
ELECTIONS 2016: Key points on debate of economic from small parties

Meanwhile the Minister of Finance was a little less confident in such a “reserve” existing, citing that during a recent visit to Latvia she observed that the differences in VAT collection are more related to how the measure is calculated. She spoke against reducing VAT, citing it as benefitting both the poor and the rich, instead suggesting to establish targeted benefits for the poor.

Kubilius was sceptical of the current coalition government’s efforts in fighting the black market economy in Lithuania and proposed an alternative approach “We aren’t suggesting increasing taxes. We’re suggesting to decrease them for those with low income. Furthermore we propose that formally labour taxes would be paid not by the employer, but the employee and to add them all into one place. Then employers will have no more reason to hide taxes.”

This way the tax-free income size would be applied to not only the individual income tax, but also to social insurance and mandatory health insurance payments. That way those in the low income brackets would receive higher incomes and the taxes would become more justified. The tariffs for the lowest income bracket would thus decrease from 36% to 26%.

Budbergytė agreed labour taxation should decrease, but believes that the government should simply stick to increasing the tax-free income size.

The former PM believes that Lithuanians have a tendency to expect many state financed services, but tend to avoid paying taxes and expect a free ride. As such he finds it better to not discuss tax cuts in a vacuum, but also include discussions of public services that are financed by the taxes. Kubilius noted that Lithuania redistributes far less tax income from its GDP than other EU states and hopes that new taxes won’t be needed to resolve this, rather that better handling of VAT, income tax and black market labour should suffice.

The state budget misses out on €1 billion due to exemptions for the four main taxes pointed out R. Budbergytė, albeit not specifying whether it would be a good decision to remove any or all of the exemptions. That said she expressed confidence in the stability of state finance and overal growth, with no expected rapid increases or decreases. When Delfi inquired about the potential need for propperty and vehicle taxes that Budbergytė hinted about at the start of her term, she was less specific, stating that “I definitely did not say that a vehicle tax is inevitable. I said that most likely there will be a time when it will need to be considered. Before a car tax, however, there is an environmental pollution tax. It is not made to simply fill state coffers.”

The minister hinted that she is more inclined to raise taxes for “immobile property”, with taxation on property currently only composing 1.5% of tax income, she was not very specific however, explaining that “If we are to consider it, we need to perform very detailed analysis and examine how it could be done, by raising the progressiveness of the real estate tax or raise the tax for those with high income, or reduce the general tariff, but broaden the tax base.”

A. Kubilius stated that the Conservatives have no such plans.

'No new taxes in the near future' - new Finance Minister (1)

The current government has no plans to introduce any new taxes, says Lithuania's new finance minister,...

Seimas electoral debates are to go on for four weeks leading up to the October Seimas elections ....