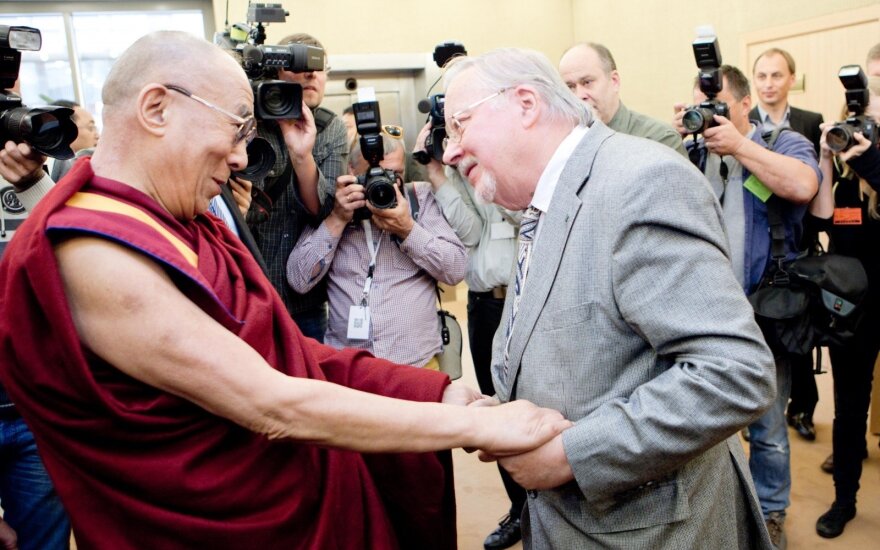 Landsbergis had a separate meeting with the Tibetan spiritual leader.

Andrius Navickas, chairman of the Lithuanian parliament's Provisional Group for Solidarity with Tibetans, told BNS that their meeting with the Dalai Lama covered topics such the significance of culture, military conflicts and climate change.

Arūnas Gelūnas, deputy chairman of the group, said that not much attention was paid to the situation in Tibet.

"He, of course, condemned the brutal use of force, violence, and even mentioned Bolshevism and said that Lenin corrupted Marxism, making it a militant, vengeful system," he told BNS.

Navickas criticized Lithuania's leaders for not meeting with the Tibetan spiritual leader during his fourth visit to the country.

"That seems a short-sighted approach to me. I think the leaders of our state, I mean the speaker of the Seimas and the head of government, forget that the world likes the brave and principled ones, and those who try to guess where the wind blows from and to see economic benefits eventually lose," he said.

"I believe the president would have benefited if she had met," he added.

Prime Minister Saulius Skvernelis has said that there was no need from either side for a meeting between him and the Dalai Lama.

The Dalai Lama will go to Latvia after completing his visit to Lithuania.

Prime Minister Saulius Skvernelis says that there was no need to meet with the Dalai Lama who is...

The Dalai Lama on Wednesday planted an apple tree in Tibeto Skveras, a small park in Vilnius named...

If US, North Korea nuclear talks serious, "most welcome" – Dalai Lama in Vilnius

Tibet's spiritual leader, the Dalai Lama , expressed hope during his visit to Vilnius that the...