ECB President Draghi in Vilnius: Lithuania would be disadvantaged among Baltics without euro

BNS
aA
Mario Draghi, President of the European Central Bank (ECB), has handed a symbolic “Euro Star” to Vitas Vasiliauskas, the governor of the central Bank of Lithuania, on the occasion of Lithuania’s upcoming accession to the euro area. 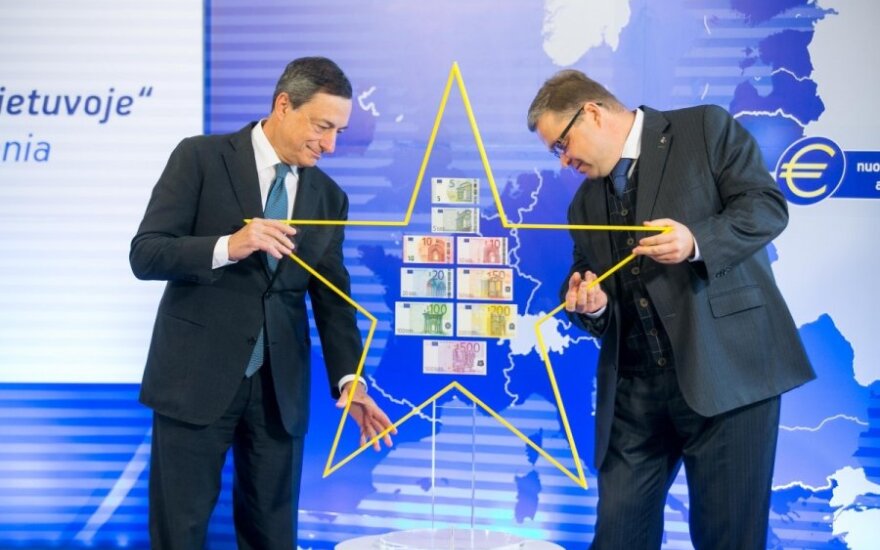 “This morning we welcomed a very distinguished guest. Mario Draghi, the President of the ECB, presented Lietuvos Bankas with the Euro Star — a symbol confirming that the national bank of Lithuania has been accepted into the euro family”, Vasiliauskas said at a news conference on Thursday.

“The euro area gets a financially stable, responsible and reliable partner. In the past two decades, we faced several dramatic shocks… However, despite those unexpected shocks, we managed to prove our ability to work successfully under a fixed currency exchange regime,” he added.

The Euro Star is a sign traditionally presented to the countries adopting the single currency.

Changeover to the euro will help Lithuania attract foreign investment and will ensure stability in geopolitical terms, ECB President Draghi said in Vilnius on Thursday.

Lithuania’s decision to join the euro area demonstrates that “our common currency is attractive, despite difficulties in some euro area member countries”, Draghi said at a conference dedicated to the adoption of the euro in Lithuania.

“International investors usually perceive the Baltic countries as belonging to the same economic area. With Latvia and Estonia already using the euro, Lithuania would have a clear competitive disadvantage when it comes to attracting investment from abroad if it delayed adopting the euro,” he said.

“Furthermore, belonging to the common currency area may provide stability for the country in the current geopolitical environment”, Draghi added.

Lithuania will adopt the euro next January.

The results of the poll published on Wednesday showed a near-tie between euro supporters and opponents in Lithuania, with 47 percent in favour of adopting the single currency and 49 percent against.

However, according to Draghi, “recent experience shows… that initial scepticism might well turn into support, once people become more informed about their new currency and the changeover modalities”.

No reasons for high inflation

The governor of the central Bank of Lithuania sees no reasons for inflation to grow in Lithuania in the medium term and believes that the authorities will manage to keep inflation close to 2 percent.

“In a medium term, we, of course, will keep on the target, I’d say, of 2 percent, so I don’t see any circumstances which could influence aggressive increase of inflation in this part of the world,” Vitas Vasiliauskas said at a news conference on Thursday.

Meanwhile ECB President Draghi downplayed the fact that a country with deflation was about to join the euro area.

“No, it doesn’t worry me. We already have our own problems; I don’t think things are going to change much… This is a country that is growing at 3 percent, which will also make changes in a positive way,” he said.

According to Draghi, a slowdown in Russia’s economy will have effects on the economy of the European Union (EU).

“We don’t know how it will unfold in the future and I think at this stage it would be premature to foresee any definite consequences of these developments,” Mario Draghi said at a news conference in Vilnius on Thursday.

The effects of Russia-Ukraine conflict on the EU had thus far been minor, he said, adding that the downturn of Russia’s economy would have repercussions for the Community.

“The Russian economy has been going down, growth has decreased considerably and it will have some effect on the European Union,” Draghi said.

The European Union (EU) and the euro area may help Lithuania shield itself from Russia’s economic...

Half of Lithuanian euro coins minted

The Lithuanian Mint has already minted 97 million Lithuanian euro coins, which is about half the...

Ranks of euro supporters swell to 47 percent in Lithuania

The Lithuanians have slightly warmed up towards the euro, which the country will adopt next year, a...

Lithuanian prime minister: Euro adoption has had no effect on prices

Prime Minister Algirdas Butkevičius has emphasised that statistic data do not give grounds for...