Jonas Baltaduonis
aA
Without much of a fervour or pomp last week saw the end of the most prominent and quite efficient couple in the Foreign Affairs Council. Carl Bildt and Radoslaw Sikorski left the stage and took up their new roles. It’s an end of an era and I am afraid also an end to their most precious pet project of the two gentlemen – Eastern Partnership. 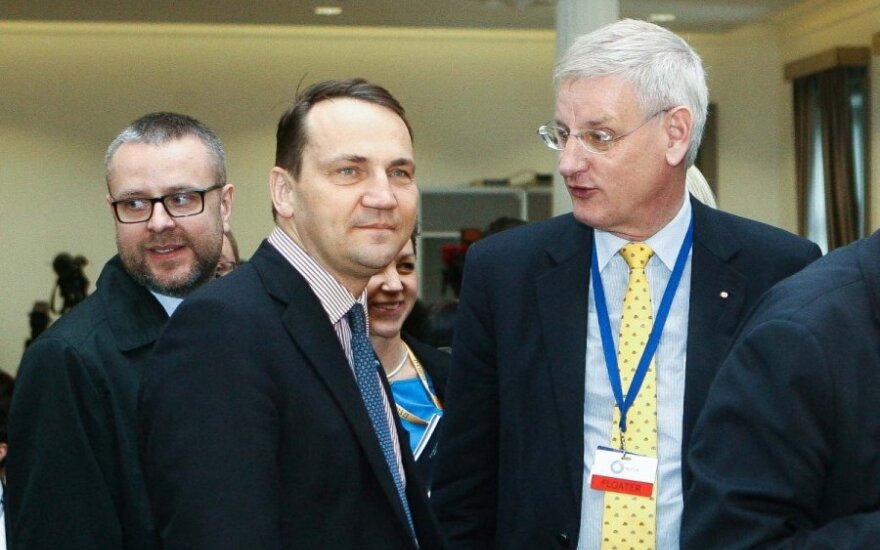 It was Stockholm and Warsaw that pushed forward this new notion into EU-speak. Create a space in the EU neighbourhood that through their European aspiration and ardent reform effort float towards Brussels. It wasn’t straightforward strategic thinking, it was introduction of politics into EU foreign policy. It was playing geopolitics Brussels style. Difficulties were clear. Belarus remained largely uncooperative and self-isolated. Armenian and Azerbaijani leaders hardly saw eye to eye on any of the relevant questions. And then there were eager students like Moldova and Georgia and the one which was the anchor for the whole initiative Ukraine. For better or for worse, the European Commission has done a lot to bring closer our civil societies, officials and legislations. There were ups and downs in each and every country, and after 4 years in existence came the test of the Vilnius Summit. If Vilnius Summit was the peak of the Eastern Partnership process, everything thereafter was a slide downhill.

Having witnessed the Euromaidan and continuous military conflict between Ukraine and Russia, the politically correct talk of building bridges and comprehensive dialogue were over. Nevertheless one need to reflect on what were the faults of the Partnership and what are the perspectives for the neighbourhood.

Eastern Partnership was a concept where on paper multilateral political effort was accompanied by a bilateral track of negotiations of relevant agreements. In practice, an often ceremonial and prone with diplomatic problems gatherings were delivering little or no substance, while bilateral track was moving forward at differentiated speed. A difference of commitment by EaP countries emerged immediately. Armenia moved quickly in negotiations, but stalled in implementation finally abandoning the whole project altogether. Azerbaijan moved swiftly prompted by the success of Armenian negotiations, but later demanded a special status, closer to the one of “strategic partners” rather than just partners (sic!). Moldova started with 7 April 2009 unrest on the streets of Chisinau and since the election of Alliance for European Integration coalition moved decisively pursuing the spirit the letter and the in-between the lines of the European agenda. Georgian politics were turbulent more often than not, nevertheless the progress the country reached in initialling agreements is remarkable and represents another success story.

And then Ukraine happened. As negotiations with Yanukovich-led government moved along, it was clear that without Ukraine Eastern Partnership won’t fly. At the same time, Brussels was well aware of the deficiencies of the regime in Kyiv, yet the ends have justified the means. As heads of states gathered in Vilnius, the expectation was still strong that Yanukovich will sign. He did not. He asked for postponement of DCFTA and was told “NIET”. Later followed Euromaidan, deaths of protesters, green men, occupation of Crimea and war. And with the unfolding events Eastern Partnership came to terms with its key question. Is European Union prepared to do geopolitics or not? 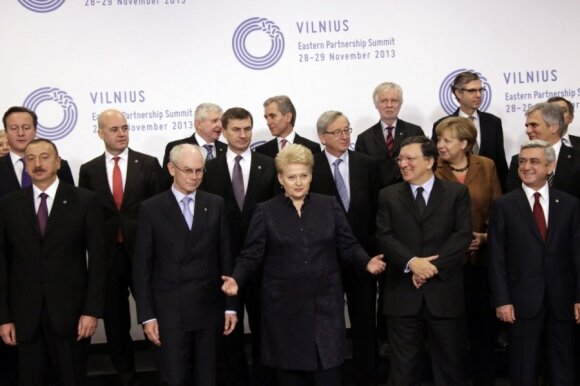 It’s all about Russia

More often than not the discussions surrounding the ever closer integration of EaP countries turned towards Russia. Either for its monopoly of energy supply, or impact on the solution of the frozen conflicts, or effective control of breakaway regions, Russia inevitably always was in the centre of the debate. Eventually, it was an outright competition of two geopolitical narratives for us in Europe, but for our partners it was a straightforward blackmail. And admittedly the European Union has failed on many counts or is failing still.

Russia from the outset was against the Eastern Partnership and considered it interference into its zone of influence. The European Union never accepted it and hoped that in a few years Moscow will come around and there shall be a format in which they could cooperate. This did not happen. First, the stagnating economy in Russia and endemic corruption put a heavy strain on Putin’s legitimacy. History tells us that Russian leaders solve their legitimacy issues by resorting to violence and identification of external or/and internal enemies. Second, the enlargement of the European Union has changed irrevocably (let’s hope) the balance of power in the European Union. Central and Eastern European Member States have strongly opposed some of the efforts by the Commission to accommodate Russia’s interest and involve them in the decisions affecting EU Eastern Partnership.

What happened in Ukraine is an impressive push by the citizens for change. No one ever thought that after Orange revolution hangover the Ukrainian people were capable of that. What happened thereafter is simply insane. Irrational and yet meticulously planned invasion of Crime and Donbass. Occupation of former, installed frozen conflict in the latter, tells us what it means to be a geopolitical player in the Eastern Europe or as Moscow would put it in Russia’s exclusive zone of interest.

The deafening question is what EU is going to do about it? This question largely will define future of European Neighbourhood Policy, Eastern Partnership or EU Foreign policy. So far the answer to this question is abundantly clear. The European Union is not prepared to be a player and our ambition has been thwarted by brutal power.

The future is wide open

So what is the future of the Eastern Partnership?

The European Union needs to come to terms with the reality. It would be disappointing if we were to be pretending to play “chess”, while Kremlin is playing “bowling”.

First, a visa free regime as part and parcel of the Association Agreement with EU. So if Russia ever wishes to have visa free regime with the EU it needs to adhere to the EU acquis and open its markets.

Second, the European Union needs to put more emphasis on the bilateral track and differentiate as much as it is necessary among different EaP countries. The multilateral track needs to take secondary if not tertiary importance.

Third, the European Union needs to seek an important role in all negotiations formats in the frozen conflicts in the region – Minsk Group, Geneva talks, 5+2 format. New Foreign policy chief Mogherini could appoint personally EU representatives in those groups and provide strong mandate to push for more progress in de-escalation and internationalisation of the conflict (removal of Russian troops from Nagorno Karabakh, South Ossetia, Abkhazia or Transdnistria.

Fourth, eliminate an existing distinction ENP South and ENP East. These are good geographic features for bureaucrats, but effectively it allows for Member States to have pet project countries and divides us as a Union. It is natural that Lithuanian Foreign Policy has little or no interest in Tunisia and possibly understandable why Portuguese diplomats are disinterested in Moldova, but if we do not “unionise” the neighbourhood, we will be cheating ourselves and most importantly our partners. EU can’t offer things that all of its Members not willing to commit to.

Is it not a death warrant to the Neighbourhood policy?

That would depend on the tools that we are able to mobilise to spur change. Action is precipitated by the events. Events in Ukraine show that the EU can unite in the face of aggression, but it is slow, it is bureaucratic and resolve wears thin with time passing by. Therefore one neighbourhood policy with many bilateral tracks is the way forward.

Departure of Carl Bildt and Radoslaw Sikorski will be felt in many circles in Europe. The Eastern Partnership that they sought to build was the right project for the peaceful times we have had. Now it is time to change tack and move decisively and invest in the consolidation of democracy, rule of law and human rights in the neighbourhood as this still remains the only way to protect the European Union from disintegration or outright military confrontation.

Starting from the beginning of 2014, both the EU and Ukraine have been facing many common challenges...

EU countries are planning to tell Russia it has no say on changing the Ukraine trade treaty...

Visegrad differences will always exist, but V4 is much stronger than critics make out

An interview with Andras Racz, a Senior Research Fellow at the Hungarian Institute of International...

Amid conflict, Poland pushes Ukraine to align with West

Throughout the conflict in Ukraine , Poland has tried to use competition between Russia and the...