BNS
aA
Early voting in Lithuania's local elections started on Wednesday, allowing voters who will not be able to come to polling booths on Sunday to cast their ballots for candidates to municipal councils, mayors and one vacant seat in parliament. 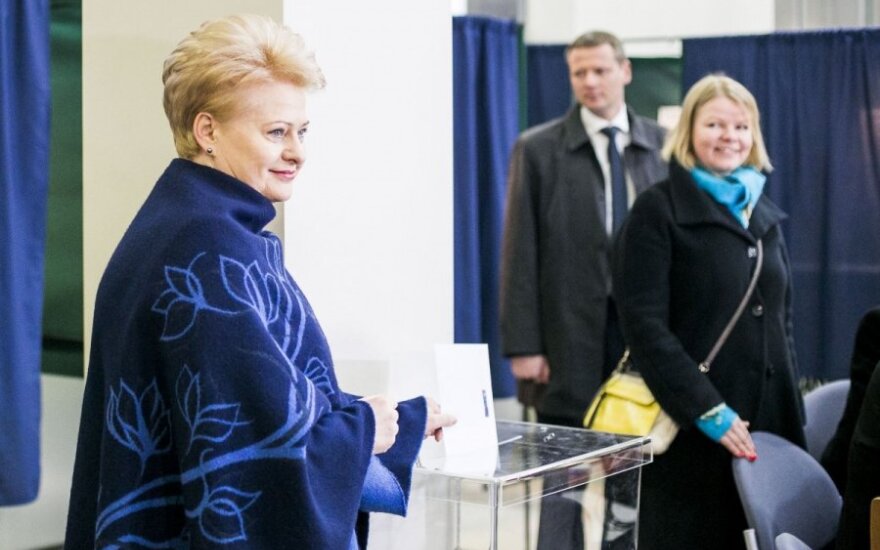 Lithuania's President Dalia Grybauskaitė was among the first voters at Vilnius City Municipality on Wednesday morning. She refused to specify what candidates she voted for but assured her vote did not go for the candidates who represented interests of the Kremlin or oligarchs.

"I can only say who I didn't vote for: I definitely didn't vote for two persons, definitely no, although there were 12 of them and I would never vote for them. One of them is a person who currently represents the Kremlin's interests in Lithuania, and the other person represents oligarch interests in Lithuania and has put Vilnius in deep debt," the president told journalists. She voted early because she will not be back in Lithuania on Sunday from a conference of women leaders in Chile.

A total of 2.54 million voters are eligible to vote in the elections to local governments and mayors, while the Žirmūnai constituency in Vilnius, which will have to elect an MP to replace Vytenis Povilas Andriukaitis, a Social Democrat who took a post at the European Commission, has 42,000 voters.

Over 15,000 candidates will vie in the elections to local governments, with more than 400 running for mayors. Some 1,524 members of local governmental councils will be elected on Sunday, including 60 future mayors. The municipalities that fail to elect a mayor in the first round of voting, i.e., a single candidate is not supported by more than half of the vote, will hold a second round of voting in two weeks, on 15 March.

Twelve candidates are running for the MP mandate in Žirmūnai. If necessary, the second round will also take place on 15 March.

Some betting companies in Lithuania allow placing bets on the results of the upcoming mayoral...

According to the Central Electoral Commission (VRK), 23 political parties intend to participate in...

President Dalia Grybauskaitė has commented on the new mayoral election procedures and said that the...

A large group of prominent Lithuanian politicians will vie for a parliamentary mandate at the...