BNS Lithuania has asked three analysts whether this meeting poses any threat to Lithuania. 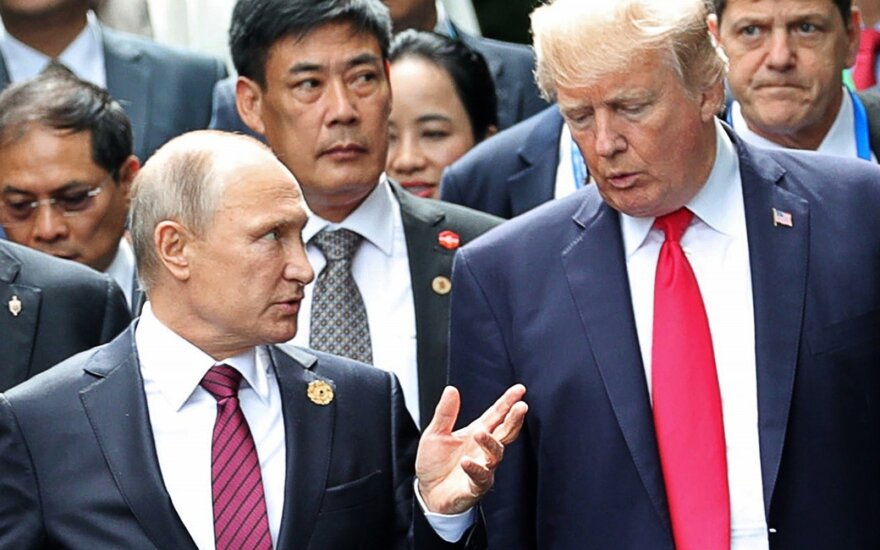 Vygaudas Ušackas, former foreign minister, ambassador to the US, UK, Afghanistan and Russia, director of the KTU Institute of Europe.

The meeting is risky as Trump makes decisions as a showman and investor. He creates a screen of fuss and seeks benefit. He does not believe in liberal democracy and international rules and he doesn't like international organizations. He knows that Europe needs the United States more than the United States needs Europe, especially in the area of defense. He wants to show American voters that he's capable of resolving conflicts and is a true leader. With Kim Jong Un in Singapore, and with Putin in Singapore.

Meetings between highly unpredictable leaders, especially like Trump and Putin, are always potentially dangerous. Both of them now target the EU and international rules-based system. Both put their countries above others and this is what might unite them. Moreover Trump does not always listen to his closest advisors. During a meeting with Putin last year, despite recommendations, he agreed to set up a bilateral commission on cyber security. Later on, the decision to withdraw the company of US troops from Lithuania followed. A coincidence? I said then and believe now that it's not. Let's not be naïve.

What would pose a direct threat to Lithuania and the whole region? First of all, suspension of military exercises by American troops in the Baltic states. When I asked General Curtis M. Scaparrotti, the current Supreme Allied Commander Europe (SACEUR) of NATO Allied Command Operations, about such a threat during a discussion, he was more than diplomatic and evaded a direct answer. I'm afraid this might be another signal of unpleasant surprises.

Another threat is Trump's public or private hint that Crimea is part of Russia he may deliver to Putin. Finally, nobody will ever learn everything about what the two leaders agreed during their confidential meeting before official talks. So no news from Helsinki is good news for us.

Kęstutis Girnius, an associate professor at the Institute of International Relations and Political Science at Vilnius University

There are no major threats. Trump barely knows anything about the Baltic states and doesn't really care about them. He will probably focus more on Russian support for new sanctions on Iran and the old ones on North Korea. For Putin, the Baltic states are small beer, compared to other issues. During Trump's term the United States decided to supply arms to Ukraine, called on NATO to increase defense spending (which lessens Russia's security), and lambasted the Nord Stream 2 project.

NATO Secretary General Jens Stoltenberg's claim that Georgia will eventually join NATO will be cause concern as it's a red line for Russia, which is reflected in its actions after the 2008 NATO Bucharest Summit opened the door for possible future membership for Ukraine and Georgia. I think Putin will pay attention to these issues, the renewal of nuclear weapons and missile treaties (an arms race is too expensive for Russia), as well as trying to convince Trump that he is right in planning to withdraw American troops from Syria.

I really doubt that Putin would ask Trump to stop NATO training in the Baltic states. The parallel move in South Korea has been harshly criticized, and Trump knows it would cause a storm in the Congress and within the Republican Party.

Trump does not have any specific goals, he wants to show that, in contrast to Barack Obama, he's capable of finding common grounds with Putin and winning his trust. Putin also cares more about the meeting itself rather than any concrete agreements. This summit confirms Russia's 'indispensability' in international politics and paves the way for convincing wavering EU states to object to prolonging the economic sanctions against Russia.

Vytautas Keršanskas, a political scientist and analyst at the Eastern Europe Studies Center

I cannot completely discount the possibility of any threat. Something that might seem insignificant for President Trump from the perspective of the United States' global interests and is worth exchanging for something valuable related to some other issue, might be a key security challenge for Lithuania. Even more so, he's not a president who draws clear red lines in his public rhetoric, and this becomes a basis for raising these questions.

For example, arising challenges related to the security of the Baltic Sea region and the militarization of the Kaliningrad region. Trump has not denied that he might agree to halt American troops' participation in military exercises in the Baltic Sea region. But at the same time I believe that Trump's team has fairly good knowledge of security challenges transatlantic partners, especially the eastern members of NATO, are facing, and there's no such possible "exchange" in the positions prepared for the American president ahead of the meeting.

In general, Trump sees the world from the position of power and is therefore going to meet with Putin demonstrating the power of the United States. He achieved a considerable rise in the military budget early this year and told a press conference during the latest NATO summit about achieved agreements on increasing the defense budget of the whole Alliance, which „the Alliance has never seen".

Looking at work done, including new sanctions for Russia, the sale of arms to Ukraine, the bolstering of the US military forces in Europe, and not doubt-causing rhetoric, I don't believe Trump's meeting in Helsinki might pose threat to Lithuania.

Unexpected words to Grybauskaitė from Trump and Macron

The NATO summit meeting could have ended in failure – there were talks about US President...

US President Donald Trump says he might discuss American troops' training in the Baltic states...

Irish president, in Vilnius, calls on EU to defend multilateralism

Irish President Michael D. Higgins , on a visit to Lithuania, on Wednesday called on the European...