(1)
the Lithuania Tribune, LRT
aA
European Union countries must look for compromise and help the British government convince the British people to stay in the Union, but not at the price of discrimination against EU citizens, says Lithuanian President Dalia Grybauskaitė ahead of important talks in Brussels. 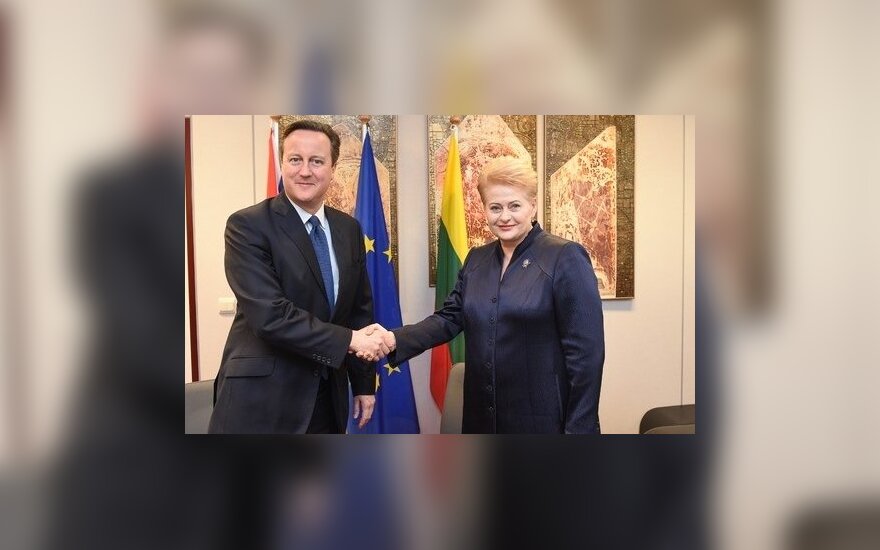 A European Council meeting starting on Thursday will address, among other things, Britain's reform demands for the European Union.

"One of the main questions is the UK's proposed EU reform that contains many things: promoting competitiveness, proposals on sovereignty and economic management," Grybauskaitė told LRT radio before the summit. "But one item concerns social issues, it is the so-called immigration reform which would affect benefits that all newcomers to the United Kingdom get from day one."

"Our position - my own, that of the [Lithuanian] government and the European Affairs Committee - is clear enough: we will not accept discrimination against European, including Lithuanian, citizens. We absolutely must help find a compromise and help Great Britain come up with solutions so it can convince its people to stay in the EU, but this must be done in the way that does not discriminate EU citizens in relation to third countries," Grybauskaitė said.

Britain's proposed measures to withhold in-work and out-of-work benefits for newly arrived EU migrants cannot be applied indefinitely, Grybauskaitė added, but only for a limited and finite period. Moreover, the new measures on cutting social benefits must not apply for migrants who are already in the UK, according to the Lithuanian president: "New arrivals could be denied some benefits for a limited period of time. But only Lithuanians who arrive now, not those already there."

"So we have a number of conditions and our position coincides with the one of the Visegrad states [Poland, Hungary, the Czech Republic and Slovakia]. I think we will look for compromise, but there must be no discrimination," Grybauskaitė insisted.

The Visegrad-4, as the group of four Eastern European countries are known, recently presented a unified position, insisting that cutting child benefits for migrant EU workers in Britain who leave their children at home can only be applied to new cases and not to people already in the UK.

The four countries want to limit the changes to the UK and resist applying the new system uniformly across the EU. They also want the “emergency brake” on migrant benefits demanded by Britain weakened in return for approval of any deal.

British Prime Minister David Cameron presented four key demands to European Council president Donald Tusk. First, London wants assurances that Britain can opt out of further political integration in the EU; the second demand concerns competitiveness and cutting regulation from Brussels; third, restricting access to in-work and out-of-work benefits to EU migrants for the first four years of residence in the UK; fourth, Cameron has demanded explicit assurance of non-discrimination against EU states outside the eurozone.