BNS EN
aA
NATO's former Supreme Allied Commander Europe (SACEUR), retired General Philip Breedlove, has said in Lithuania that dialogue with Russia is inevitable, suggesting that it should be started with minor issues before moving on to strategic decisions. 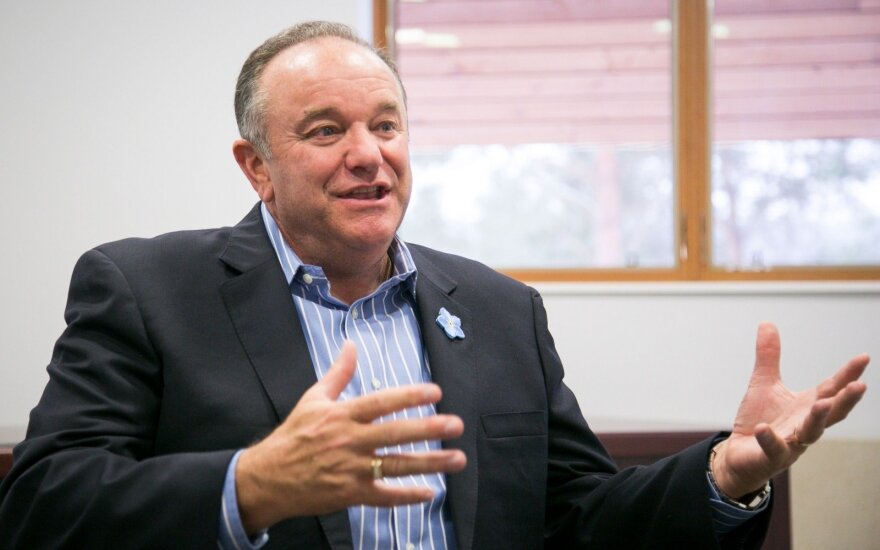 "I think dialogue is inevitable, it's a matter now of structuring and building a dialogue to have constructive and conclusive way forward," Breedlove said in an interview to BNS. The general admitted he was not overly optimistic about the matter.

Mr. General, in Lithuania there is some concern in the air that President-Elect Donald Trump may seek a quick deal with Russian President Vladimir Putin over zones of influence, some even call it Yalta 2. Do you see it as a possible realistic scenario?

Breedlove: What I would say is that let's not jump to conclusions, there are lots of rumours out there, I don't think that there is any profit in getting too concerned with them.

BNS: Do you believe there will be efforts to renew dialogue with Russia from the US side?

Breedlove: I think dialogue is going to happen. Now what we should do is work to structure that dialogue so that it is constructive and that it meets and speaks to the desires of all our European allies, partners and the United States.

I think dialogue is inevitable, it's a matter now of structuring and building a dialogue to have constructive and inclusive way forward.

BNS: In this part of the region there is a widespread belief that previous reset policy has failed. Are you optimistic that Russians would be willing to engage in meaningful dialogue and that would end differently than previous resets?

Breedlove: This sounds a little cold but I don't have a lot of optimism about that. I think Russia started in 2008 and then from Georgia to Crimea to Donbass to northern Syria they have made their intentions pretty well known by their actions. I think this is something that's going to have to be cultivated. I think that Russia has demonstrated that it is very interested in what is best for Russia. I think that's normal for a nation to have its own self-interest but I think that in the collective sense we all, the Europeans, Russia and the Atlantic partners in the United States, in Canada, we need to come to a future that is good for the collective vice individuals.

BNS: You talk about structuring the dialogue. What are the red lines? What can be traded and what cannot be traded?

Breedlove: I don't ever use red lines. When I draw a line, I intend to keep it and so I do it very sparely. What I talked about last night is the way I see this and that is that we cannot start having a dialogue that immediately jumps to grand strategic issues. I think that is doomed to failure and it will not be productive and could actually be disruptive. I think that what we need to do is begin a series of dialogues and address small incremental things that we see as mutually beneficial. If we have success in those small efforts and we build trust and confidence in each other and we build effective communication, then we move on to something a little more challenging. If we have success there, you can see the pattern. If we establish over time – and I am not talking 20 years or 10 years – but if we establish over the next year or two a series of successful places that we have worked together through dialogue and had success, then maybe we can begin to tackle with our European brothers and sisters the bigger problems that we face.

BNS: Are you talking about dialogue between NATO and Russia or bilateral American-Russia dialogue?

Breedlove: In my opinion we should have a more inclusive dialogue.

BNS: Yesterday American armored brigade started entering Poland. Some Lithuanian officials says for Baltics it's not enough because it may be understood that NATO potentially prepares to defend Baltics from Poland rather than from inside. Would you agree?

Breedlove: I think NATO has made pretty straightforward through the enhanced forward presence that NATO intends to be inside the Baltic nations. Here of course you 're looking at German battalion. I think you're more questioning about where the United States intends to be. NATO of which the United States certainly is a large part has made it very clear that they are gonna put presence in the Baltic nations. Where and when US troops will end up will evolve over time I think and will also be reflective of how well the enhanced forward presence. Let 's just be very straightforward, I've been very vocal for years that enhanced forward presence is a wonderful thing but we need more.

BNS: So is NATO capable at this stage of reinforcing the Baltic states in case of crisis?

Breedlove: The answer is yes, NATO absolutely has the capability. The question is: is NATO ready and does it have the will. The size of the NATO force, the capability that is in NATO is really quite good. If we work to bring the readiness and responsiveness of the whole NATO military force up, it wou ld be very impressive. The question is will the nations invest the money required to train so that the readiness and responsiveness is better and also invest so that they have better capabilities.

BNS: Your former deputy general Richard Sheriff wrote a book about the potential war in Baltic states and he said that 'West could find itself at war with Russia in 2017'. Is that possible, is it a plausible scenario?

Security policy experts are gathering in Lithuania on Thursday for an informal Snow Meeting to...

Kirkilas – Russia wants neither Trump, nor Clinton – it wants a weak America

The coming 45th President of the United States of America Donald Trump could be the first to end up...