Deep inside Russia: A few questions that guys in Petrozavodsk backyard have for Lithuania

Artūras Morozovas,
DELFI EN
aA
The most changeless of all places in the world. That’s Petrozavodsk, a city in Russia’s north-west and the capital of the Republic of Karelia, according to its inhabitants. They express strong sympathy with Lithuanians because of corruption, their “Washington-serving president” and membership in the “homosexual union”. 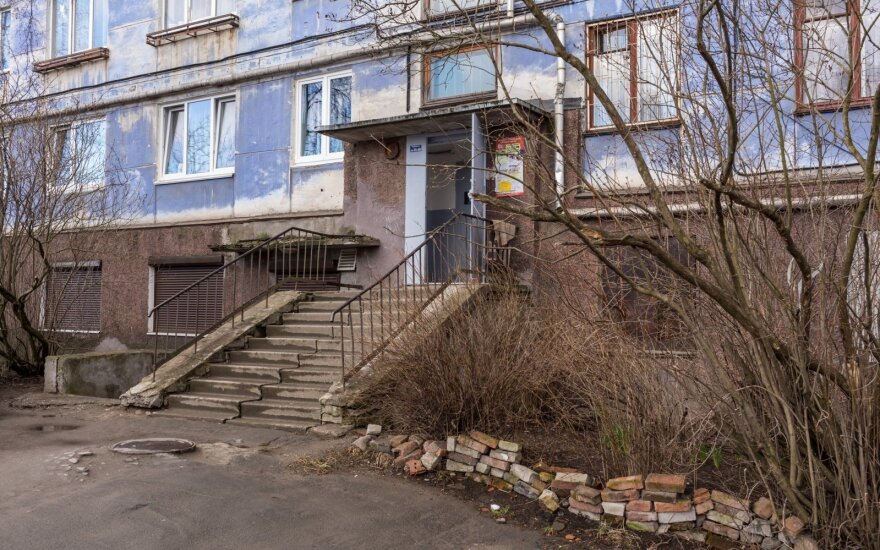 When one early Sunday morning Kolya, the main character in the film, comes back to the backyard of his home in Petrozavodsk, to the apartment block on 14 Frunze Street, the people living on the fifth floor, as he describes them, are looking out of their windows. They hadn’t seen their neighbour for fifteen years and couldn’t believe it. It was as if the Far East that he had returned from was another planet. And they welcomed him back in exactly the same way that they had seen him off – at the kitchen table, drinking vodka and sniffing bread, an old custom.

When Kolya asks them what’s new in the neighbourhood, his close friends, neighbour Fedya who always twists his moustache with a nostalgic smile, says “Nothing. Nothing ever changes here. This is the most changeless place on Earth.”

Having spent three days in that very apartment block on Frunze street in which Kolya and his nosy neighbours of Nikolai Dostal’s film grew up, I am convinced that the director did not have to think too hard when creating a scene for the story.

The backyard of the Khrushchev-era apartment block was and remains like a film set. Behind each window there is a real-life family drama and each stairway landing has its own comedy, detective stories and tragedies.

A man returning from fishing puts away his filthy fishing rods into some warped wooden cupboards, his wife, despite her husband’s very obvious anger, takes a look at the contents of his plastic bag.

A woman from the third floor landing carrying a plastic brush stops in front of me and asks me if I am going to photograph everybody for another film.

And the manhole cover that protrudes from the tar, invariably tripping you when you walk down the tilting staircase of the apartment block, dwarfs all of the world’s problems. The obstacles in this backyard are more real than any decisions made in the Kremlin. This backyard is one of millions of independent republics where an upturned head can see a “cloud paradise”.

Don’t come here and tell us what to do, understand?

So the day passes in this microscopic piece of Russia, in the backyard of a five-storey apartment block of faded blue in a suburb of Petrozavodsk.

The focal point of this yard are two sagging wooden benches on which many a confession has been immortalized: Ksyusha admits to being in love with Stasik, and uttering “Love is” Danil makes known his feelings for Dasha.

Evening falls over the yard which comes to life and three heroes of the yard worthy of the camera sit on the bench of love confessions. Olga, always smiling and holding a two-litre bottle of beer, sits down with Vitalik, who’s arrived on crutches and in slippers, and another comrade. The latter's perpetual smile shows missing teeth, but his shiny ring and one tattoo after another on his arm and a silver cross around his neck take all the attention away.

Walking out of a small shop, I join them all and open a can of beer and it’s not long before a conversation starts. 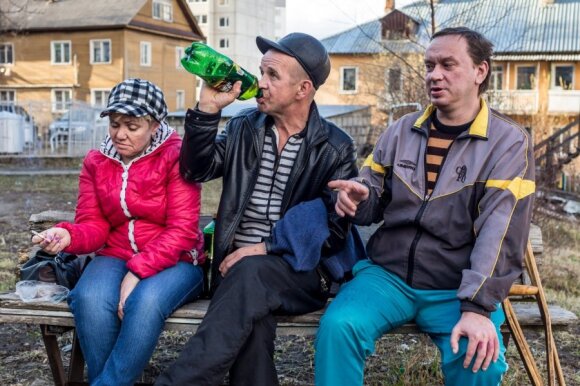 The man in slippers knows quite much about about Lithuania, too. He feels for us because of the corruption, a “Washington-serving president” and our membership in the “homosexual union”. He extends his brotherly sympathy.

Olga stays out of the conversation and looks at me, smiling. The third person who has not introduce himself pulls a bottle of “Baltic Bear“ beer out of her handbag.

“OK, so what do you think, are Russian soldiers fighting in Ukraine?” asks Vitalik after a healthy gulp of beer, continuing the political topic. There are two questions that I get often asked by those who want to determine which side of the barricades I and my country are.

The first question is if there are Russian soldiers in Ukraine and the second, who shot down the Malaysian Boeing over the Donbass.

I silently nod, disappointing the company that hoped to assign me to their side.

“Don’t come here and tell us what to do, understand?” Vitalik warns me with a grin and with that the conversation about politics ends.

No sense of economic crisis

Vitalik points out two most important moments in his life - one happened ten years ago when he suffered a spinal injury and the other one when they filmed “Cloud-Paradise” in his kitchen.

“You could even see my granny in the film. She was still alive then. People say that they’ll make another film. This time I want to be in it,” Vitalik says as he sorts out his crutches that have fallen down.

I get the feeling that he’d like to continue the conversation in the site of one of his life's proudest moments, his kitchen, but he then makes the excuse that it’s too much of a mess right now.

This backyard is like a time capsule. In sharing their reminiscences, none of them are specific about dates and often it’s hard to tell if they are talking about yesterday or the Soviet times. The only thing you understand is that specifying time would not change the point.

When asked what life is like today, Vitalik repeats the words of Fedya, a character in the film: “Our lives are stable. Nothing changes here. We don’t experience any crises. We live from allowance to allowance and that’s that.”

His friend with a leather hat takes the point further: “Before, it was a lot better – if you could steal, you could live well. At that time everybody was stealing from the factories and warehouses. These were the rules of life, understand?”

The conversation then turns to alcohol. I express my surprise that I hadn’t seen as many alcohol-stricken Russians as I had expected. My opinion was interrupted by a burst of laughter from the three: “Come later this evening. You’ll see a lot of them lying around in corners.”

Nothing can relate you more about the life and existence of a people than its relationship with death....