(1)
Vladislav Moiseyev,
DELFI EN
aA
Nothing can relate you more about the life and existence of a people than its relationship with death. Death is an inevitable conclusion; what’s left behind when there's nothing else; the very essence. 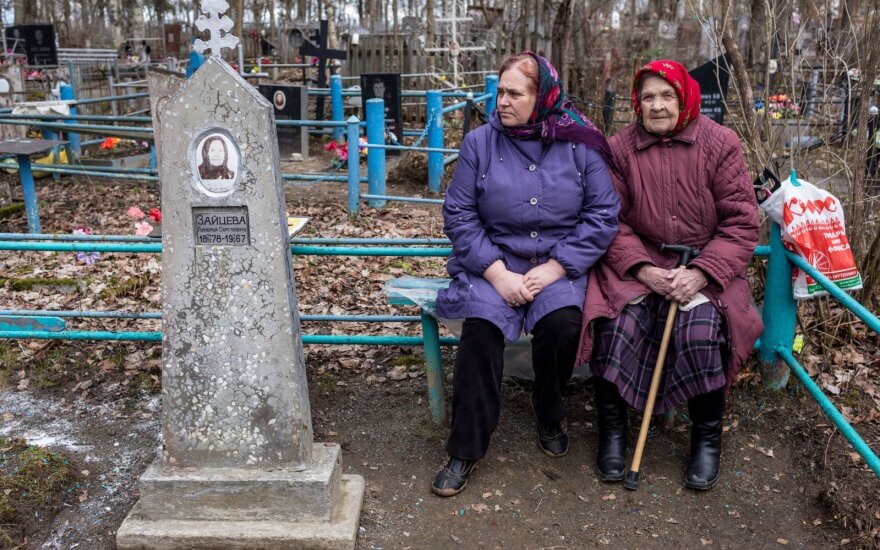 There are those who see death as a bliss and others for whom it brings anguish. The footprint that a person leaves as he makes his exit reveals not only what his life was like and how he lived but also what his people were and how they thought. Very often a person leaves nothing of themselves behind other than a tombstone in a cemetery, but even that’s enough to decipher what he and his life were about.

There’s a whole history in a handful of ash released to the winds somewhere over the Ganges River; a cemetery in America is a fine illustration of the American way of life and the American dream. Rows of near identical tombstones in perfect alignment, very much like small houses somewhere on the New Jersey coastline all constructed and landscaped in exactly the same way.

In Russia’s north-west Petrozavodsk region there is a place called Sulazhgora. An unbelievably big cemetery lies on a slope. It's thousands upon thousands of graves – some only just filled, others centuries old. On a regular day there’s hardly a living soul there, just the peace and quiet and the sound of the old trees creaking in the wind and the incredibly fresh air. On the weekends the Petrozavodsk cemetery comes to life with the local people visiting the graves of their loved ones.

Almost all the graves are surrounded by ubiquitous little fences: each grave is a piece of private property, carved out with a view to the future and realization that your closest relatives will one day be laid to rest next to you. One grave often shelters many generations: great grandparents, grandparents, parents and their children.

We walk amongst the graves. There are three women sitting at one tombstone. One of them is over ninety years old and gazes thoughtfully into the distance, reacting little to what’s happening around her, a warm scarf covering her grey hair. The woman is very sad, her eyes are weary and sunken and her mouth is wrinkled. Her mother and other relatives are buried here. Her gaze is piercing. One sense that in her thoughts the old woman is already in another world.

A younger woman at her side is her daughter. She tries to get her mother’s attention but the latter does not care. The third woman stands up and starts scattering salt on the stony soil to keep the weeds away. She will most likely be the last one to be laid to rest in this family grave. There’s a small bench and a table in this piece of land with its little fence. People come and visit the grave and eat and drink and leave these treats to the spirits. “This is a pagan tradition. We entertain the spirits. The priest at the church reprimands us saying that this isn’t Christian, but tradition is tradition,” says the woman scattering the salt. They say that the dead are best visited on Sundays before five o’clock in the afternoon. After that it’s best not to disturb them. You can leave some sweets and fruit. 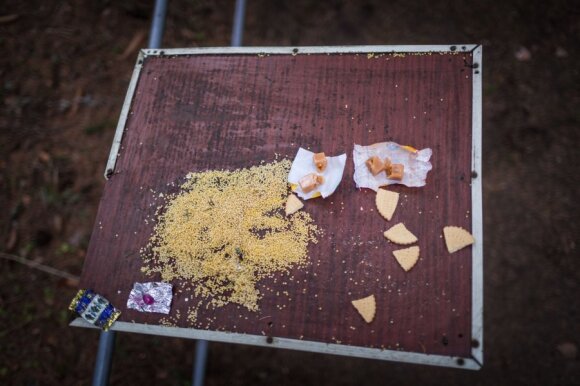 Indeed, there are sweets, apples, tangerines and water placed on some of the graves. Sometimes homeless people sneak in and help themselves to these treats. Candy wrappers and tangerine peels litter the graves but not everybody dares to touch the delicatessen intended for the dead. “Not good at all”, they say. A part of of the old cemetery is very run down – the grass is all overgrown, the little fences are rusted, the tombstones are sagging and the crosses are all rickety. Here there are old graves bearing small plaques and colourless portraits of the departed that have found peace. The sun and rain have faded many of the plaques, making them practically illegible and the portraits lie underfoot in the grass. At times it’s difficult to tell who’s buried in which grave.

As time goes by these nameless graves become choked with litter such as leftover funeral wreaths and uncut grass and turn into small garbage dumps. Sometimes the memory of a person that lived is lost forever. Maybe all of those close to him themselves have died or have gone to live elsewhere. But that’s something that happens rarely.

There are still Soviet monuments adorned with military stars or some other symbol making it known who is resting under your feet. The graves are menacing and almost identical in appearance. Some graves have the Jewish Star of David while others have the lithe crescent and star of Islam. Still, Soviet-era graves are quite uniform, just like the lives of the people buried here. A collective death. 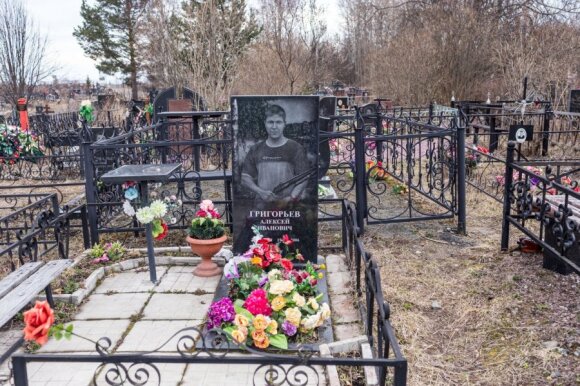 The new part of the cemetery and the old part are like day and night. One black memorial stone sports an image of a road, a forest and a power line, with no writing. It’s therefore unclear if it’s the grave of an electrician or of someone who found their end in these particular surroundings.

There’s another incredible specimen – against the background of a forest and a river, a young man with cropped hair stands wearing a shirt with a large “Reebok” sign on it. In his hand there is a hunting gun. He lived on this earth for merely 27 years. Apparently he liked hunting. And there’s another exhibit close by – a tombstone with a steering wheel decorated with flowers. Another tombstone depicts a huge truck depicted with a stanza written in italics:

“You were a driver from God, a beloved man. Infinite sorrow and grief after you have gone forever.” 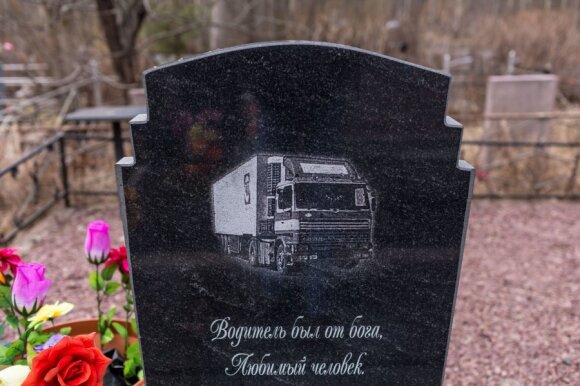 Not far away there’s a tombstone that shows a football field with balls flying around. An epitaph beneath reads, in English: “You’ll never walk alone”. A little further a tombstone is inscribed with a piece of lyrics ”The world deserted without you”. Another heart-rendering line from a poem on another tombstone reads: "Impossible to bring back, impossible to forget”.

Heart- and flower-shaped tombstones show favourite possessions of the departed: cars, weapons, dogs, cats and other pets, forests, rivers, lakes, a train, a volleyball net, a constellation. At times one cannot help thinking that some of the tombstones were part of creative story or art competition.

The graves of the very rich are adorned with sculptures of angels, massive marble features and surrounded by luxurious little fences, while those of the very poor have simple black stones with laconic inscriptions like “We remember, we mourn” or “To my beloved wife”.

It would be wrong to make generalizations after visiting just one cemetery in Petrozavodsk. We simply understand that Russians love driving cars, that their hearts are close to matters of transport and that they love nature and their pets. Just one thing may asserted with some degree of certainty – we have changed profoundly after the times of the Soviet Union.

Simple tombstones bearing nothing but a passport photo and straighforward dates of birth and death have been replaced by gaudy individualized graves. To be honest, though, such individuality often strikes as rather disingenuous, even bizarre, infantile or ridiculous. As if someone has torn the noble veil of grief from the face of death.

Plastic flowers, solemn meals, tears – these attributes of funerals and mourning haven’t gone anywhere, but our attitudes to death have changed. It has become more philosophical and ironic. Soviet modernism gave way to Russian post-modernism and the deceased can now cheerfully play with their favourite dogs, smile and eat, drink or drive around in their SUVs.

Death never has, does not and never will make people equal. These days, funerals are not only about bidding farewell to the deceased but also a demonstration of social status, financial power and imagination (or lack thereof). What’s more, in a cemetery one must never allow thy neighbour outdo you, with the resulting races taking on truly strange form. Certainly it says more about the living than about the dead.

As the slope reaches its peak the graves get more scattered ultimately the cemetery fades into a forest. It takes a long time to walk from one end to the other. It looks like an entire village lies buried here. In Russia, cremation is still looked on with suspicion, especially by the faithful who say that it is not very Christian. 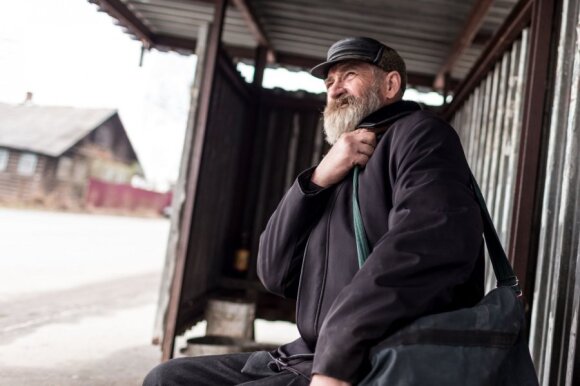 We go back to our hotel. At the bus stop an old man in a cap and leather jacket comes up to us. He has a small packet in his hands. He doesn’t look at the number of the bus. He asks for help and starts asking who we are and where we’re from.

It turns out that he’s been on pension for a while now and lives partly in a village and partly in the town. He smiles a lot and states that he doesn’t live badly, his health is not too good but he doesn’t buy medicine and so he doesn’t feel any crisis.

“I recently had a stroke and after it I almost stopped eating. I pick nettles and boil them and make a soup. It’s been like that for a year now and only when I get very dizzy must I then go and buy food. And you’ve come from the cemetery? Well, that’s obvious. We'll all meet there,” says the old man thoughtfully nodding his head and looking at the road to the cemetery on Sulazhgora. The next moment he jumps into the bus with incredible agility.