Deal to buy 200 Joint Light Tactical Vehicles from US signed 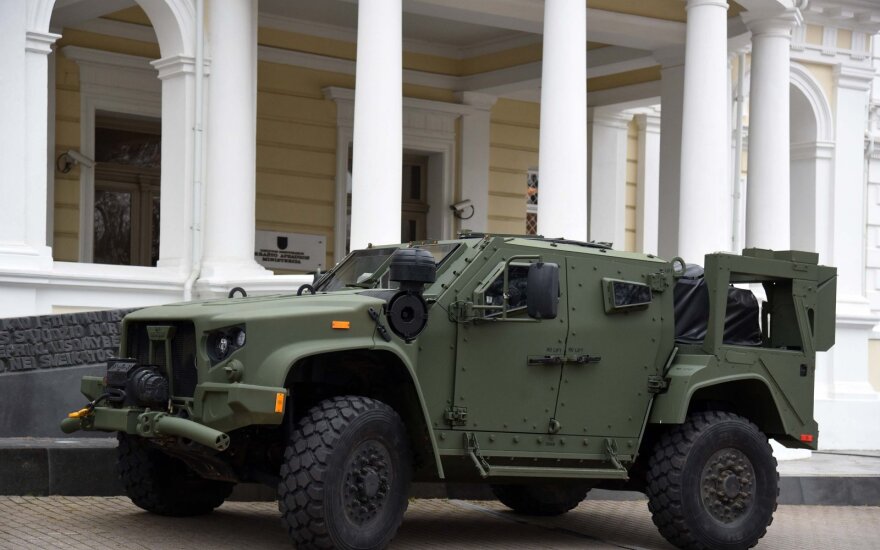 Under the deal signed with the US government, the JLTVs will be manufactured by Oshkosh Defense.

The vehicles are to be delivered to Lithuania between late 2021 and 2024, and will be allocated to the Land Force and Special Operations Forces.

"This will strengthen the support of the Land Force and Special Operations Forces, and will enhance specific intelligence, artillery and logistics capabilities," Defense Minister Raimundas Karoblis told reporters after the signing ceremony.

"It is the most advanced armored all-terrain vehicle in the world today, with excellent characteristics and security for soldiers. It will be used for decades," he added.

Related articles
Defense Ministry hopes to sign JLTV purchase contract in November
Nauseda: Europe can no longer blindly rely on US for its security

Under the agreement, Lithuania will be able to buy another 300 vehicles if needed.

According to Karoblis, Lithuania will decide on this toward the end of the first phase of the contract in 2024, based on its existing defense funding and priorities.

Lithuania needs the JLTVs it is buying both for its defense needs and for international operations, he said.

Sigitas Dzekunskas, the director of the Defense Materiel Agency, which signed the agreement, told reporters that the vehicles will be equipped for different tasks and will have more than ten configurations.

Marcus Micheli, the chargé d’affaires at the US embassy in Vilnius, said the deal is "more than just a purchase".

"This is a really strong symbol and sign of incredibly strong and productive relationship between the US and Lithuania," the diplomat said.

Oshkosh Defense Vice-President Mike Ivy said such JLTVs are used by the US military, and Slovenia, Montenegro, and the United Kingdom are planning to buy them, too.

Delivery of Boxers delayed due to identified defects (5)

The delivery of German Boxer infantry fighting vehicles ( IFVs ) to Lithuania is running behind...