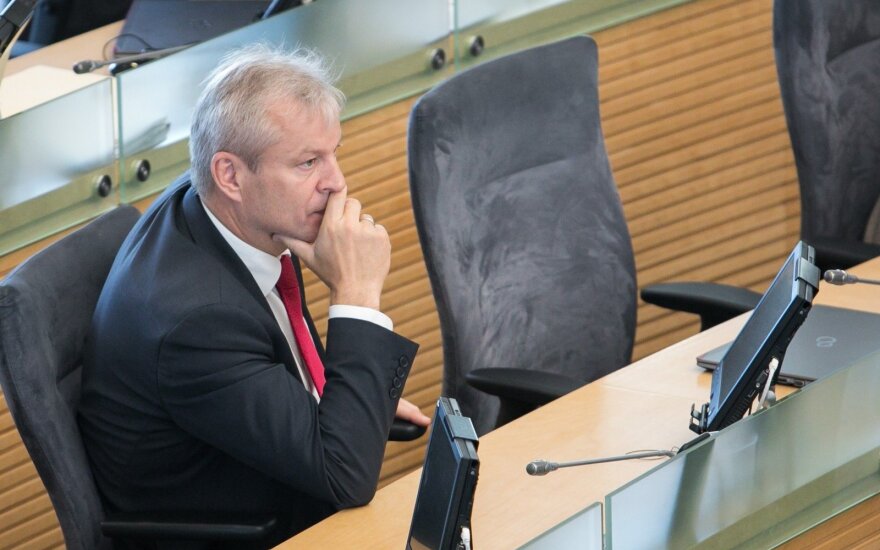 The Seimas has asked the Constitutional Court for its opinion on whether Bastys' actions listed in a parliamentary impeachment commission's conclusion run counter to the Constitution.

The commission has stated that Bastys breached the oath by concealing his ties with Piotr Voyeiko, a former KGB agent, and by helping to arrange publicly unannounced meetings between people from Russia's state nuclear energy corporation Rosatom and Lithuanian officials.

Bastys told reporters as he arrived in the court for the hearing that he was sticking to his position that he had not breached the oath and that the allegations that he had helped people working for the benefit of Russia were groundless.

"I have my position, which I have repeatedly stated both to the Seimas and to the special commission, and I am holding to that position," he said.

"Too experienced not to perceive the risks"

The Seimas' position was presented to the court by Vytautas Bakas, chairman of the impeachment commission. According to him, the situation Bastys found himself in was not a conflict of interest or an incidental acquaintance with former or current agents of Russian special services.

"We are speaking about Lithuania's paramount interests, such as energy independence", Bakas, a member of the ruling Lithuanian Farmers and Greens Union (LFGU), said.

Stasys Šedbaras, another member of the impeachment commission, said that Bastys, an experienced parliamentarian who has in the past worked as an adviser to the prime minister, could not have been so naive as not to perceive the danger of his ties with the Russians, all the more so because he had been warned by the State Security Department (VSD).

The defense ask for more witnesses

Bastys' defense lawyers asked the court to summon VSD Director Darius Jauniškis and two men named in the impeachment commission's findings -- Piotr Voyeiko and Yevgeny Kostin, who is seen as a representative of Rosatom -- to testify as witnesses in the hearing

The Seimas' representatives objected to this request, saying that VSD had already provided information regarding Bastys' ties with these persons and the lawmaker himself had not denied it, and that the hearing was into the lawmaker's actions, not into those of Voyeiko or Kostin.

The court decided to dismiss requests for additional witnesses and noted that Algirdas Bloze, a VSD employee, had been summoned to testify.

Bastys did not comment on the case before the start of the hearing, apart from saying that he was sticking to his position that the allegations were baseless.

"You'll have my answer after the Constitutional Court issues its ruling," he told reporters.

Faces impeachment over ties with people working for Russia

The impeachment commission says in its conclusion that Bastys breached the oath by concealing his ties with Voyeiko, by giving conflicting statements and explanations to the State Security Department and the Seimas Committee on National Security and Defense on whether he knew that Voyeiko was working for KGB, and by helping to arrange publicly unannounced meetings between Rosatom's people and top officials of Lithuanian state authorities.

Bastys also faces impeachment over his ties with certain individuals named in intelligence materials, including Yevgeny Kostin, who is seen as a representative of Rosatom, Ernest Matskevich, a journalist of the Russian state channel RTR, Saturnas Dubininkas, who is said to be a former Kaunas mafia leader, and Vadim Pakhomov, a businessman suspected of illegal activity.

The lawmaker denies all allegations, describing the impeachment process as political retribution against him.

If the Constitutional Court rules that a lawmaker has breached the oath and grossly violated the Constitution, the parliament may strip that person of his or her mandate if at least three-fifths of all of MPs, or 85 lawmakers, vote in favor.

If Bastys leaves the parliament, a new election will be held in his Zanavyku single-member constituency in southwestern Lithuania.

Seimas to conduct probe of suspected influence to politicians, institutions

Lithuania's parliament on Thursday authorized the National Security and Defense Committee to conduct...