BNS EN
aA
Lithuania's new parliament will have to do without an opposition leader, at least for now, as the conservative Homeland Union – Lithuanian Christian Democrats and the Liberal Movement, the biggest opposition parties, have failed to reach a deal on the post. 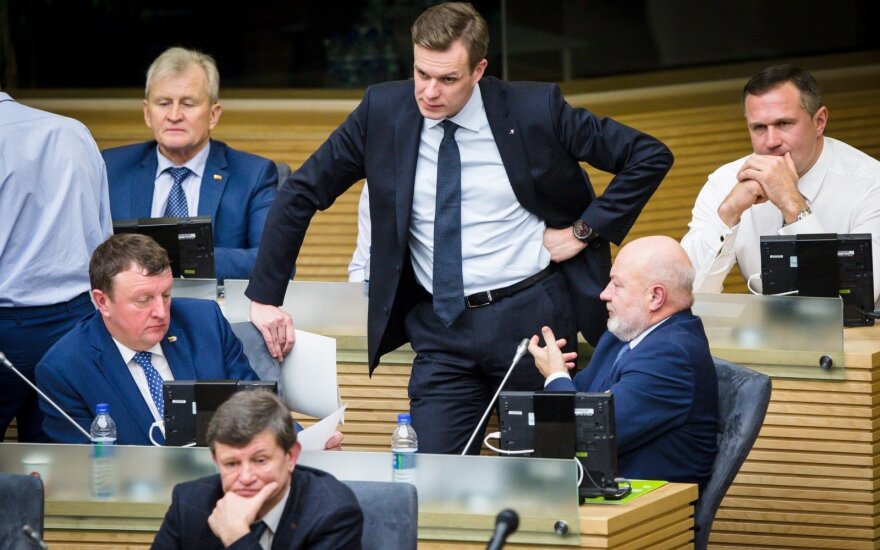 "We have not received an answer from the Liberals as to whether or not they support a joint decision on the opposition leader for a week now, and our political group (in the Seimas) decided today that we are withdrawing from further discussions and will instead focus on what is the most important, that is, the budget and so on," Gabrielius Landsbergis, the Homeland Union's leader, told reporters on Thursday.

Landsbergis said in a LRT TV program on Tuesday night that the conservatives had "put an end" to the opposition leader talks.

"We planned to discuss the document in our group today, but I heard (Landsbergis) saying in the television program yesterday that they were putting an end, but perhaps not for good," Eugenijus Gentvilas, head of the Liberal Movement's political group in the parliament, told reporters on Thursday.

"I spoke with Mr. Landsbergis last night and it seems that this is not yet a full stop during this parliamentary tenure," he added.

The two parties began consultations on the opposition leader when the new Seimas convened earlier this month, but the talks broke down after Gentvilas confirmed to reporters that his party would not sign a deal with the conservatives. The Liberals later changed their mind, but now it is the conservatives who have ended the negotiations.

The conservatives hold 31 out of 63 opposition seats in the Seimas, one voice short for their head to automatically become the opposition leader.

Bad news from the Liberals to G. Landsbergis

The Liberal Movement has refused to form a fraction coalition in Seimas with the Homeland Union...

The conservative Homeland Union –Lithuanian Christian Democrats, the Liberal Movement and the...