Linas Jegelevičius | the Lithuania Tribune
aA
Gabrielius Landsbergis, Lithuanian conservatives’ 33-year-old star and very likely future chairman, has perhaps just made his first major gaffe. His flip-flop on the issue of (dis)continuing in the European Parliament seat in case he gets elected to chair his party, the Homeland Union - Lithuanian Christian Democrats, has drawn some irk from Jurgis Razma, one of the light-weight contenders in the race. 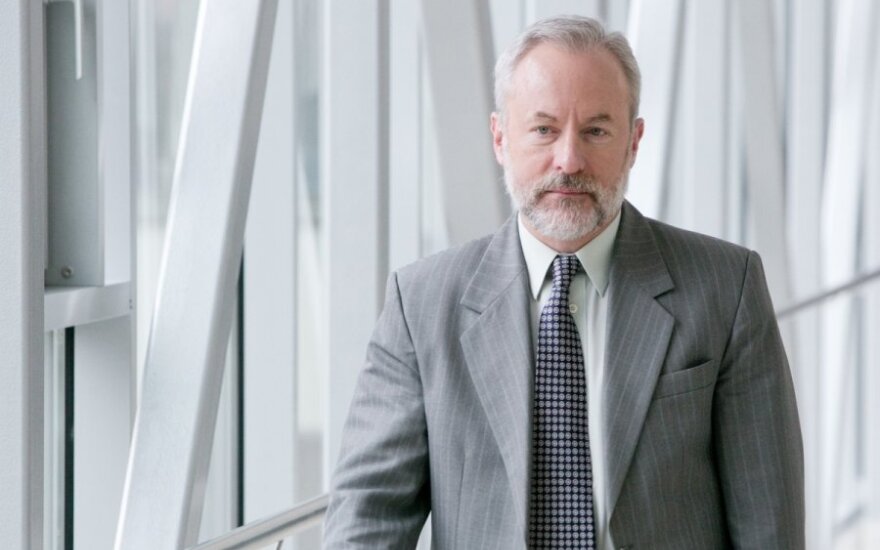 “First he says that he will leave the European Parliament as soon as he becomes the new chairperson, then he says that he will stay in Brussels until next year, when the Seimas election campaign starts off. He should not be wavering on things like that from the start. If he opts for the latter, it may not work for the best interests of the party,” Razma insisted to the Lithuania Tribune.

Gabrielius Landsbergis, the grandson of Vytautas Landsbergis, the patriarch of the Lithuanian conservatives and modern politics in general, has come 21 votes short of beating Irena Degutienė, the 66-year-old stalwart of the Homeland Union - Lithuanian Christian Democrats, in the first round of the election. With the ballots counted, the famous grandson garnered 4,525 votes and the former Seimas chairwoman got 3,913 votes - both are set to jostle in the run-off vote this Friday and Saturday.

In fact, with the voting time last Sunday ticking down and the preliminary vote count giving a slight edge to Landsbergis, Degutienė hurried to announce her concession, but with the results in two electoral districts put in question by the party’s election watchdogs, she hurried to backtrack, saying she was “misinformed”.

Although her chances to pull off victory in the nail-biting election remain slim, Razma believes neither of the contenders has a “clear ace” now.

Especially since other former candidates in the race are likely to endorse Degutienė. Razma and Mantas Adomėnas, another contender in the Homeland Union's chairperson election, have in fact already done that. 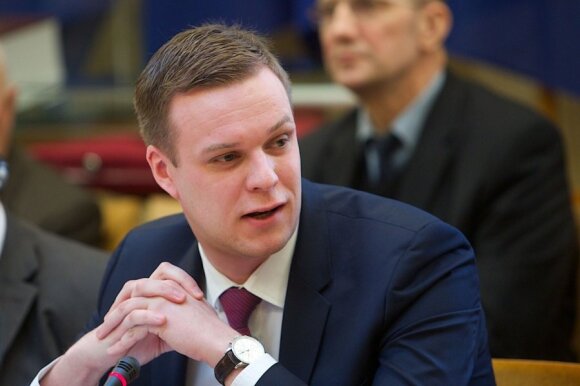 “Frankly, I thought the gap between Landsbergis and Degutienė will be even narrower, but one could hardly expect a wide margin. I personally believe it has to be a very close race,” Razma told the Lithuania Tribune.

With 231 votes cast for Razma, he stayed behind Landsbergis and Degutienė in the election.

“Obviously, some of the party's grassroots, and not only them I reckon, are wondering perhaps if the young man, who has become a member of the Homeland Union - Lithuanian Christian Democrats relatively recently, is ready to lead the party.

“I barely know Gabrielius Landsbergis, frankly. His personal traits are commendable, but I fear that such a rapid political rise might impede his future political career,” Razma reasoned. “He might stumble upon a roadblock with the burden on his shoulders, especially that he is planning to continue working in the European Parliament until the elections to the Seimas. I think this would be a mistake.”

“Some analysts and party members have obviously rushed to declare Gabrielius Landsbergis the winner. I believe Degutienė does stand a chance: she has proven to be very efficient and responsible in assessing a situation and has made right decisions for the party in the past. No question about it, she can obviously lead the party successfully,” Razma suggested. 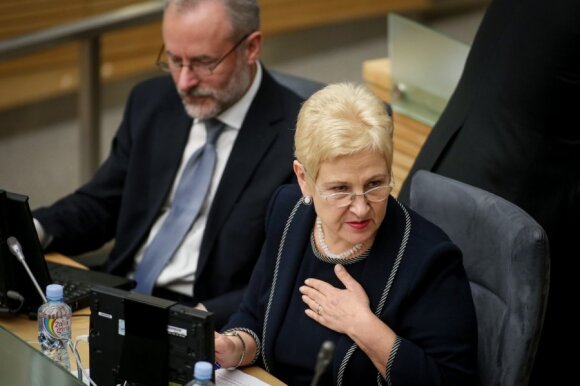 Asked about the last municipal elections, which are nearly unanimously deemed a loss to the Homeland Union, Razma downplayed the murky commentaries, saying “the party has not lost any votes” in terms of the overall tally.

“On the other hand, the results could have been better,” he acknowledged, “but our problems stemmed partly from the poor performance in the largest Lithuanian cities, like Panevėžys, Šiauliai and Klaipėda. For example, in Vilnius, we came up with a candidate in the mayoral race only at the last minute, so, certainly, it was hard to expect a major success there.”

Explaining the windfall success in the elections of the conservatives' “junior” brother, the Liberal Movement, Razma praised the party for finding “suitable candidates” in the largest Lithuanian cities, particularly Vilnius.

“Look, the discussion about the liberals’ mayoral candidate in Vilnius has created a ripple effect, with all talking about it across the country. So, again, at the end of the day, the candidacy of Remigijus Šimašius and a good, though-out strategy for the election campaign has worked out."

Amid the agitated talks that the conservatives might stay overshadowed by the liberals, the prominent Homeland Union member hastened to dismiss the view, saying that a political process and participation in an election cannot be viewed as “a race”.

“What I am concerned about most is that the ballots we get in an election would enable us to be a nucleus in forming a coalition, which is the case now in the Council of Vilnius Municipality. The key thing is to have leverage that would enable us to carry out our promises to the voters,” Razma emphasized.

Razma is reluctant to scrutinize the responsibility of Andrius Kubilius, the outgoing chairman of the party, for the tepid results in the municipal elections.

“I reckon he (Andrius Kubilius) has to assess it all himself. And he did it, in fact, announcing his resignation. Obviously, the responsibility has to be shared between him, the party’s election staff, the executive secretary and also the heads of local branches. In some of them we were able to secure majority of the seats, and in some we came with nothing. This shows how important a leader is locally,” Razma emphasized.

He says he frowns at the suggestion that the party’s new leader will have to put the Homeland Union “back on the track”.

“I really disagree with the take. I’d say that, on the contrary, the present Social Democrat government is rolling on the tracks laid down by the Kubilius-led government,” Razma pointed out. 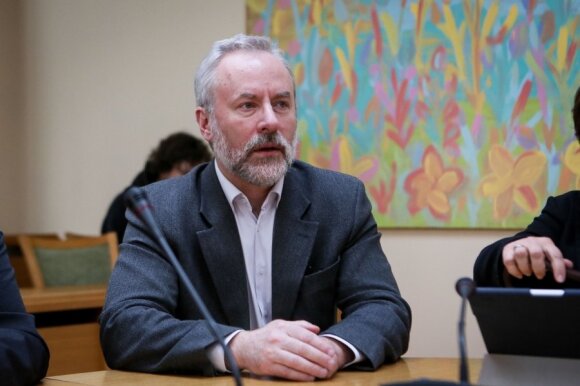 Every party has to deal with ups and downs, he insists, offering examples of the British Tory Party and Germanys’ Christian Democrats.

“Let’s remember the discussions (on the future of the parties) after Margaret Thatcher and Helmut Kohl stepped down. Look, we have had the same kind of discussion in Lithuania after Algirdas Brazauskas left the Social Democratic Party,” the conservative said.

Talking of the heated, game-changing rivalry with the liberals, Razma notes that the liberals tend not to preach “their own liberal ideas”, but rather sneak into what has been until now the realm of values proposed by the Lithuanian conservatives.

“This is a paradoxical situation. For example, Eligijus Masiulis (he chairman of the Liberal Movement) has recently emphasized that the party will focus on strengthening families and increasing people’s income, which is something we have been declaring for quite some time,” Razma noted.

He does, however, acknowledge that the Homeland Union is struggling to attract new voters.

“Obviously, one of the key tasks for the new party chairman will be finding ways of how to reach out to the younger generation. But I am convinced we will retain our conservative and Christian values, only we will seek new ways of getting the message out. We need to find new means of communication, and work out warmer relations with people out there. I think the conservatives have to give up the manner they used to present themselves until now - the pose of a righteous judge. We have to be able to admit our flaws and only then can we start moving forward,” Razma insisted. “All of this can be done.”

Asked to be more specific on the strategy for the 2016 Seimas elections, Razma said it was “too early” to say anything about the ideas the party would enter the campaign with next year.

“What I can tell you, the Homeland Union won’t follow the footsteps of the liberals and won’t propagate homosexual partnerships, for example. I am pretty sure that a large chunk of youth would rather stand for traditional family - based on marriage between a man and a woman. I don’t think our party can lose on that count to the liberals, frankly. Just because young people out there do care how the state will move forward in the future,” the legislator underscored.

He credits the unwavering popular support that the current social democratic government enjoys to the “thankful period” devoid of world crises and military conflicts.

“As I said, the economy has been built on the tracks of the former conservative-led government,” Razma insisted. He added: “It is obvious also that the Social Democrats are poised to go on with the reforms – in the field of energy, for example, or when it comes to fiscal discipline - started by us. It seems this goes down well with the considerable part of the voters. But on the other hand, it is obvious that the social democrats shun any major reforms, though they are necessary.”

The leading party in the ruling coalition, Razma admits, does well in picking brownies when it comes to appeasing the public.

“Taking advantage of the economic stability, the government raises wages and pensions, portraying it as its own achievement. They can afford that, as the other coalition partners are in the shadows or invisible at all, often dealing with their inner problems.”

Razma says he cannot speculate whether the ruling coalition will bump into a major roadblock in the run-up to the parliamentary elections.

“They certainly bask in the opportunities and benefits that the grip on power gives,” the lawmaker says.

Speaking of his own political future, Razma says he does not feel “tired” yet, so he believes he can continue representing his constituency.

“Bringing veterans and youth closer together is what the party needs now. But young people have to prove they are better and can assume the responsibilities,” the old-timer politician concluded.