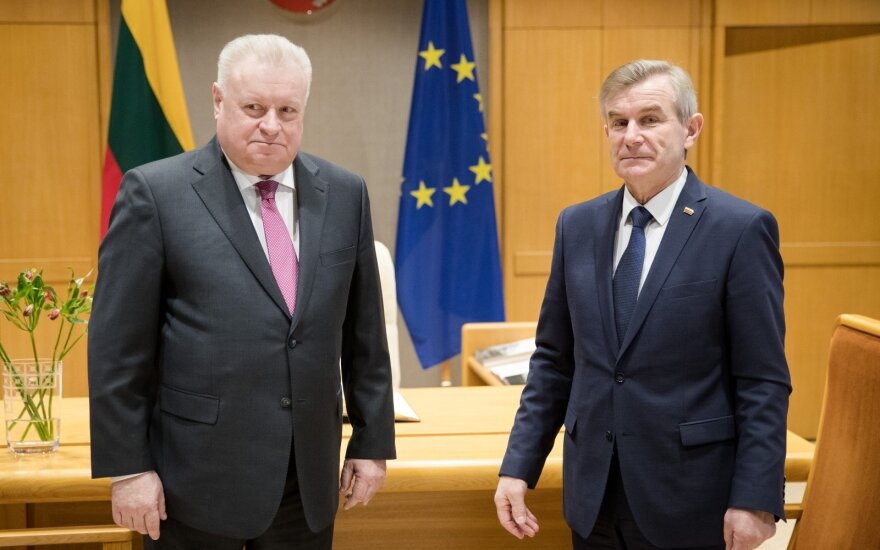 Adomenas noted the symbolic meaning of the meeting with the diplomatic envoy of a country that denies January 13 crimes.

"Why meet with the representative of the country that denies the Jan. 13 tragedy on the week of Jan. 13? The country does not only refuse to take responsibility but refuses to extradite criminals, denies and disseminates information that humiliates us about 'people shooting at our own people'. Was it not possible to see the symbolic meaning of the meeting," Adomėnas asked rhetorically in an address read in Seimas plenary on Thursday.

He said he could understand the need for the parliamentary speaker to meet with diplomatic envoys of countries that are not friendly, noting the poor organization in the sense of public relations.

Related articles
Seimas speaker: meetings with ambassadors a chance to bring up Jan 13 coup
Foreign Minister says dialog with Russia must be principled

"Why was this published so much, why was it turned into a public relations story and we had watch on television how our Seimas speaker, the chairman of an institution of a free democratic country, is pulling the chair for the envoy of a tyrannical dictatorship in our neighborhood that has hostile intentions for our territory and the territory of our friends," he added.

In an earlier comment of the meeting with the Russian ambassador, Pranckietis has expressed astonishment over the criticism, saying the meeting was not pleasant for the Russian diplomatic envoy, as he was again reminded of the Russian unwillingness to extradite defendants in the January 13 case.

Foreign Minister says dialog with Russia must be principled

Lithuania's dialog with Russia must be a principled one, Foreign Minister Linas Linkevičius said on...

V. Laučius – how to be friends with Russia

The comrades of the Seimas Speaker who advertised himself with the Russian ambassador Aleksandr...

Free legal assistance will be offered to victims of the January 13 1991 attempted coup in the case...