BNS EN
aA
Mindaugas Sinkevičius and Gintautas Paluckas, candidates for chairman of the Lithuanian Social Democratic Party, say the party is not satisfied with the current relations with the ruling Lithuanian Farmers and Greens Union, however, gave cautious comments about revision or termination of the coalition agreement. 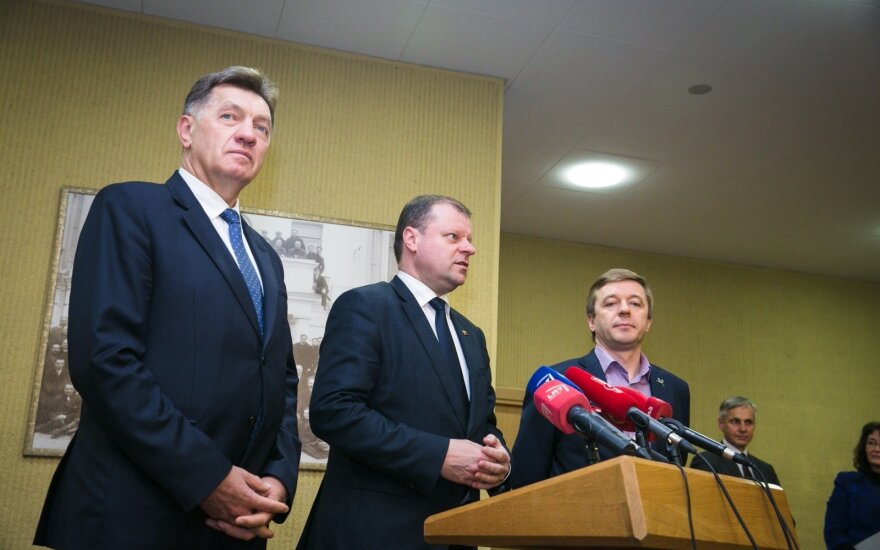 Both candidates due to vie for the LSDP leadership on April 20-22 pledge to negotiate for the party's broader role in the ruling bloc.

Paluckas, Vilnius vice-mayor who doubted after the October elections whether the Social Democrats should enter the coalition with LFGU and later criticized the conditions, told a news conference on Monday that the majority of the party's branches were not happy with the unequal relations with the Farmers and Greens. He emphasized that the Social Democrats risk "being dissolved in a bigger unit."

"I do not rule out the idea (of working in the opposition) and do not step back from the position, as there is a risk. However, there is a common interest of Lithuania, not based on parties, and there are conclusions from the European Commission and obvious statistical figures, which show that social exclusion, poverty, emigration and regional policies are indeed in a very bad shape. Therefore, stepping back and not taking the opportunity to realize the left-wing political agenda would be very very irresponsible, simply short-sighted and even criminal for the Social Democrats," the politician told journalists.

Sinkevičius, the economy minister, said in his turn he had heard from fellow party members that the current were not satisfactory due to "the indecision of the larger coalition partner." He pledged to seen normalization of the relations without revision of the coalition agreement.

Paluckas and Sinkevičius qualified for the second round of elections for leadership of the Social Democratic Party, which were held directly for the first time, with 4,017 and 3,654 votes, respectively. The second round of voting is scheduled for April 20-22.